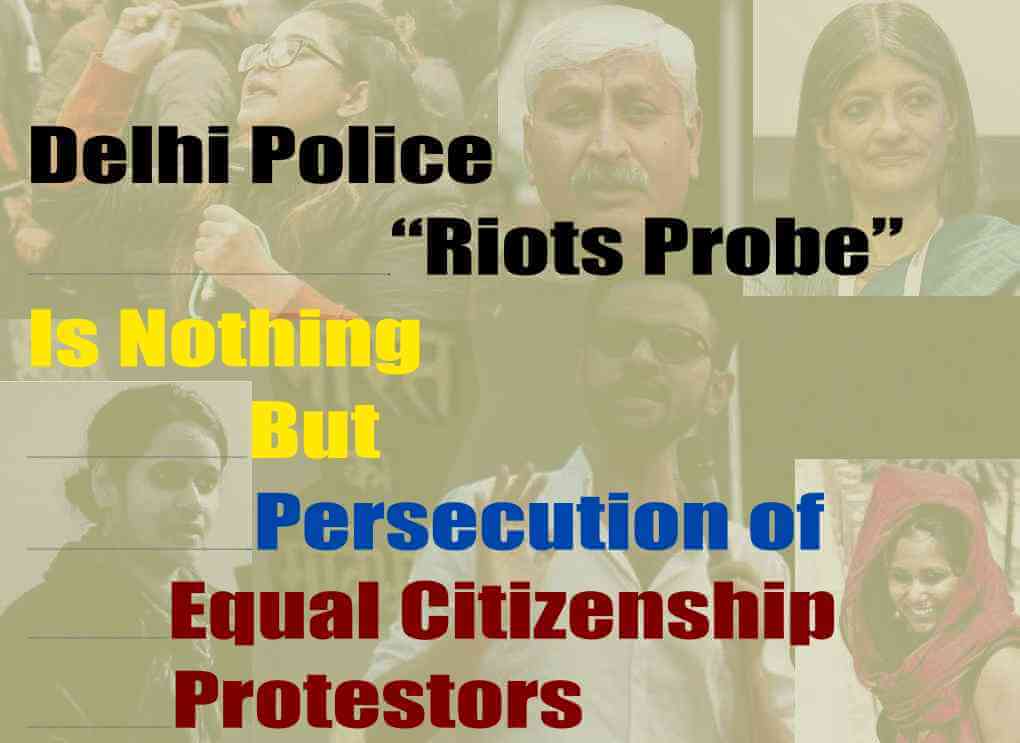 Ever since the naming of Left political leaders in chargesheets followed by the arrest of student activist Umar Khalid, criticisms and condemnations of the Delhi Police’s “riots probe” have intensified. In addition to students, intellectuals, activists, citizens across India, even former senior police officers wrote to the Delhi Police Commissioner expressing distress at the biased manner in which the police was conducting its “probe”.

Feeling the heat of these mounting condemnations, the Delhi Police has scrambled to issue a series of “clarifications” and statements. If anything, these statements confirm the Delhi Police’s inability to defend or disguise its blatantly indefensible actions.

In chargesheets filed by the Delhi Police in various riots cases, the names of political leaders like CPIM General Secretary Sitaram Yechury, CPIML PB member Kavita Krishnan, Swaraj Abhiyan leader Yogendra Yadav; intellectuals including Professors Apoorvanand and Jayati Ghosh; filmmaker Rahul Roy; former JNU student activist Umar Khalid and activists of student organisations and platforms like AISA, JCC, and Pinjra Tod were attributed by the police to “disclosure statements” by some of the accused persons. In the storm of outrage and condemnation that followed, many pointed out that such “disclosure statements” obtained in police custody carry no weight as legally valid evidence, since they tend to be scripted by the police. This impression that the “disclosure statements” in the Delhi violence cases are scripted is further strengthened by the fact that statements attributed to different individuals use identical language; and by the fact that at least three of the accused: Safoora Zargar, Natasha Narwal and Devangana Kalita have written “refused to sign” on the statements they are said to have made. It was also pointed out that there were complaints of persons being forced to bear false witness in statements to the police: to either agree to falsely implicate activists or be charged under the draconian UAPA law.

Bail orders for Natasha Narwal and Devangana Kalita in some of the cases under which they have been arrested, have clearly noted the fact that their public speeches do not, as the police claim, incite any violence, but merely call for peaceful protests. It is to compensate for this utter lack of evidence that the police is resorting to UAPA charges. The UAPA is a law designed to be a tool to target critics of the regime: a law under which a person can be imprisoned for years on the basis of a mere allegation by the State, without bail or trial. The Home Ministry, in a reply to a question in the Rajya Sabha, has admitted that of the 3,005 UAPA cases filed in 2016-18, only 27% had chargesheets: a fact that goes to show the flimsy nature of these cases. Yet, police can delay investigations endlessly, and the falsely accused languish in jail for years. Even if subsequently acquitted, the accused is punished by the very process of being booked under UAPA.

Echoing the Police Commissioner’s reply, a representative of the Delhi Police also issued a note to the media claiming it has been even-handed towards Hindus and Muslims alike, stating that “Over 250 charge-sheets have been filed in the riots related cases in which 1153 accused (571 Hindus and 582 Muslims) have been charge-sheeted.” This is a misleading claim. The question which the Delhi Police is evading in the name of its Hindu-Muslim numbers is: how many pro-CAA persons have been charged under UAPA and other stringent sections of the law, in comparison with equal citizenship (anti-CAA) protestors? Among the 571 Hindus charge-sheeted, have any but the equal citizenship protestors like Natasha and Devangana been charged with stringent sections including UAPA? Have not most of them been charged with light sections?

The Delhi Police note, objecting to the fact that “various interest groups are using social media platforms and other online portals to raise questions about the fairness of investigation of the North East Delhi riot cases,” suggested, as did the Police Commissioner in his reply to Ribeiro, that anyone aggrieved with the investigation should approach the Courts rather than social media and news portals. These responses suggest that the Delhi Police has a problem with free speech by its critics, and by independent media (it is online news portals that have done the most rigorous reportage on the Delhi violence and police probe). At the same time, the Delhi Police itself has not had any qualms in leaking custodial (fabricated) “confessions” to selected pro-government media outfits to prejudice the case against the accused equal citizenship protestors. The Delhi High Court had to issue a notice against such leaks. The fact remains that in a democracy, the police and investigative agencies must be open to scrutiny and questions by citizens in the public domain; such questions cannot be confined to courtrooms, to which few have access.

The Delhi Police’s 11-lakh page charge-sheet and its defensive statements cannot hide the truth. The police is protecting the real perpetrators of the Delhi violence while using draconian laws like UAPA to punish equal citizenship protestors. It responds to criticism by declaring that the critics represent, or are being used by “motivated vested interests”. Do the BJP leaders it is protecting, have no motivations and vested interests at all? Why is the Delhi Police allowing itself to be used by them?

The charge-sheets with their lakhs of pages bring to mind the words of Bertolt Brecht: Given the immense power of the regime/Its camps and torture cellars/Its well-fed policemen/Its intimidated or corrupt judges/Its card indexes and lists of suspected persons/Which fill whole buildings to the roof/One would think they wouldn't have to/Fear an open word from a simple man.” The simple people all over India are fearlessly facing a vindictive regime armed with nothing but their “open words”, their unity, and their commitment to the truth. It is the regime that fears the people.