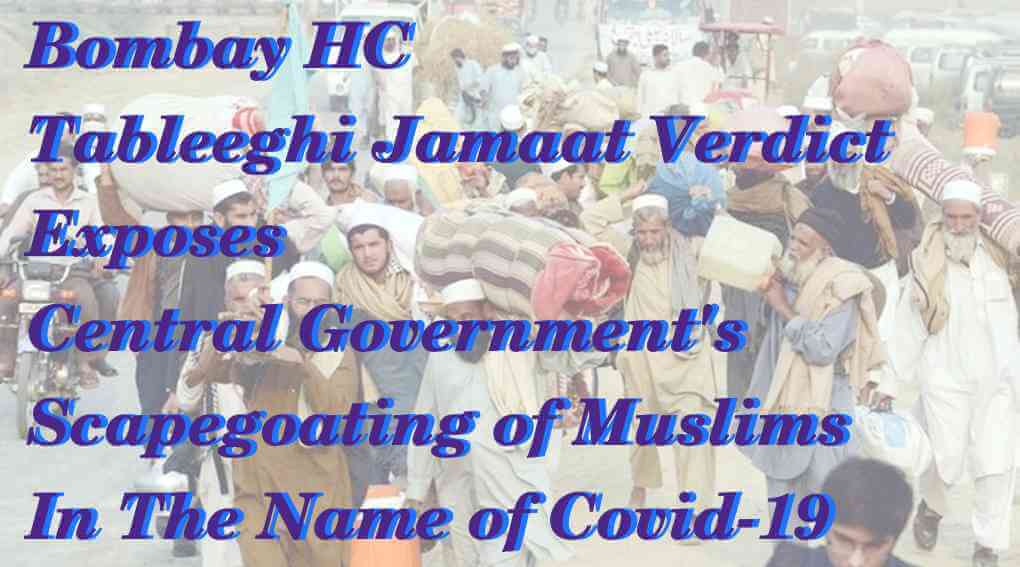 (Excerpts from the judgement by Justice T.V. Nalawade in the court of Justices Nalawade and Sewlikar)

Considering the dates on which these persons were taken in custody, it can be said that there is more possibility that they got infected in India and they were not already infected when they arrived in India. Further, admittedly screening at the airport was done of these petitioners before allowing them to leave the airport. The entire aforesaid exercise was done by the Central Government against the persons like petitioners with presumption that they were already infected when that contention cannot be substantiated.

There was big propaganda in print media and electronic media against the foreigners who had come to Markaz Delhi and an attempt was made to create a picture that these foreigners were responsible for spreading Covid-19 virus in India. There was virtually persecution against these foreigners. A political Government tries to fnd the scapegoat when there is pandemic or calamity and the circumstances show that there is probability that these foreigners were chosen to make them scapegoats. The aforesaid circumstances and the latest fgures of infection in India show that such action against present petitioners should not have been taken. It is now high time for the concerned to repent about this action taken against the foreigners and to take some positive steps to repair the damage done by such action.

In our culture, there is saying like “atithi devo bhava” which means that our guest is our God. The circumstances of the present matter create a question as to whether we are really acting as per our great tradition and culture. During the situation created by covid- 19 pandemic, we need to show more tolerance and we need to be more sensitive towards our guests particularly like the present petitioners. The allegations made show that instead of helping them we lodged them in jails by making allegations that they are responsible for violation of travel documents, they are responsible for spreading of virus etc.

If there was any substance in the contention that there was possibility of spreading virus by these persons, proper action would have been taken against them, to send them back to their own country without taking action like present one. In the situation created by pandemic near and dear of every person who is out of house and particularly out of country are worried about the well being of such persons.

The question arises as to what must have tempted the authority to issue such directions against the foreigners like the petitioners. The record of this matter and the submissions made show that action of Central Government was taken mainly against Muslim persons who had come to Markaz Delhi for Tabligh Jamamat. Similar action was not taken against other foreigners belonging to other religions.

There were protests by taking processions, holding Dharana at many places in India from atleast from prior to January 2020. Most of the persons participated in protest were Muslims. It is their contention that Citizenship Amendment Act, 2019 is discriminatory against the Muslims. There were protests on large scale not only in Delhi, but in the most of the States in India. It can be said that due to the present action taken fear was created in the minds of those Muslims. This action indirectly gave warning to Indian Muslims that action in any form and for any thing can be taken against Muslims. It was indicated that even for keeping contact with Muslims of other countries, action will be taken against them. Thus, there is smell of malice to the action taken against these foreigners and Muslim for their alleged activities. ...The Government cannot give different treatment to citizens of different religions of different countries.