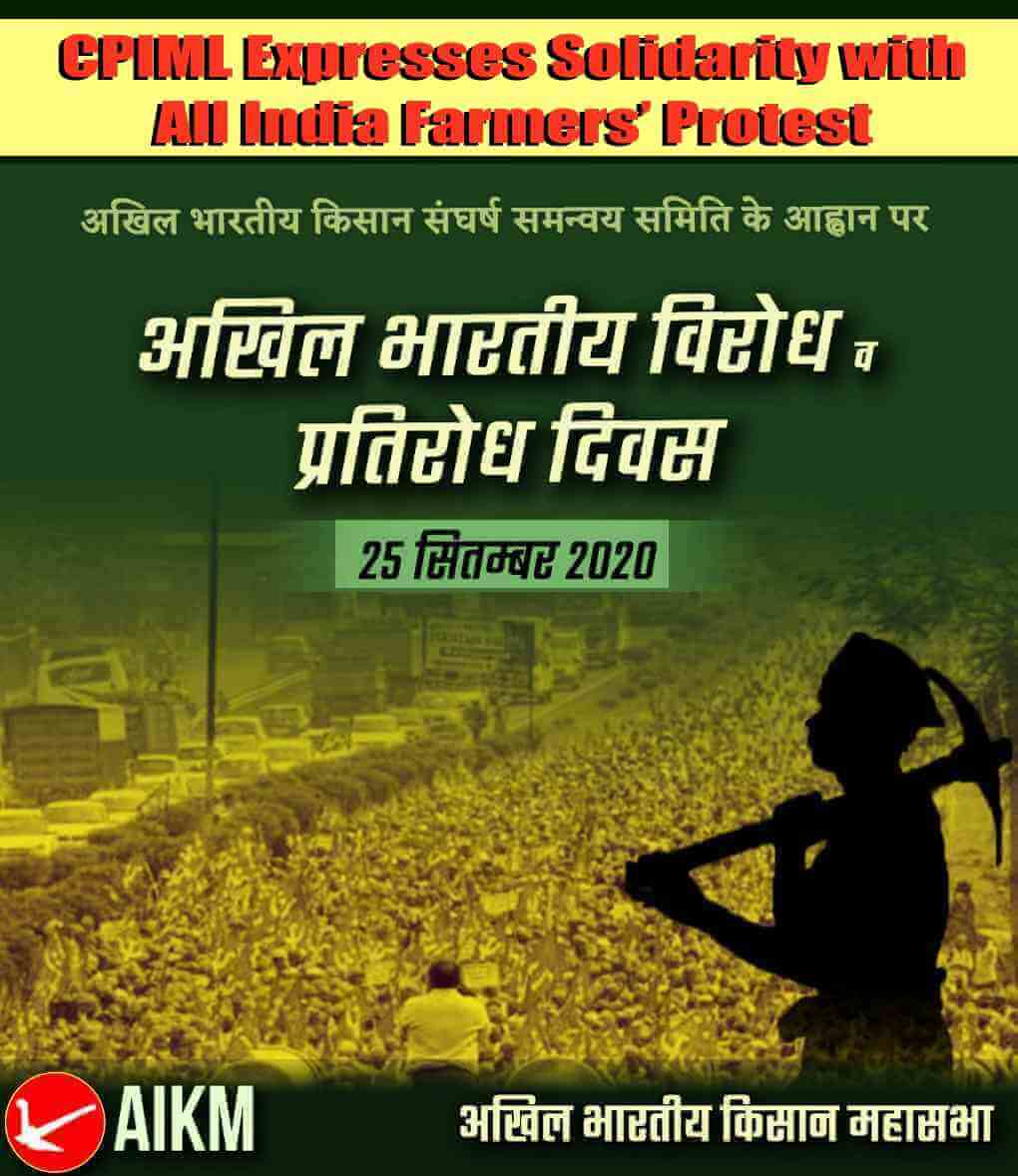 CPIML has called upon its party units in all states to join protests on 25 September called by farmers’ organisations against the Anti-farmer Bills passed by the Parliament without any division of votes in Rajya Sabha.

These draconian laws aim to snatch away livelihoods of marginal and small farmers to facilitate corporate and contract farming in the country. Farmers will be forced to sell their produce at lower monopolised prices, while the farm input costs monopolised by the same corporate lobby will continue to rise, forcing the former towards penury.

Party Politburo member Kunal has said that it is the government’s job to protect the farmers from exploitative private corporations but unfortunately these three farm Bills have given private companies a free hand to loot the farmers. Now this is nothing but a Company Rule over India’s agriculture.

CPIML has condemned the Modi Government for undemocratically and forcibly passing these Bills in the Rajya Sabha and demanded to withdraw all three Acts unconditionally in the interest of country’s farmers who still provide employment to more that two-thirds of India. The Party has also asked to implement MSP prices by C2+50 formula and enact a Law in Parliament to guarantee the government procurement of farm produce at MSP.

All India Kisan Mahasabha (AIKM) held protests all over the country on 22 September against the forcible passing of three anti-farmer Bills. Protests were also held by many other farmers’ organisations.

Protests were held by burning the effigy of Narendra Modi, holding marches and road blockades in many states. In Punjab Modi effigies were burnt in more than 1500 villages on September 21.

AIKM All India General Secretary Rajaram Singh participated in effigy burning at Obra in Bihar. He said that Modi government has betrayed India’s farmers while lying about the passed Bills. Had the government’s intentions been honest then it would have invited farmers and their organisations to take their opinions on board. He said the AIKM will fight to defend farmers, agriculture and the country’s food security at all costs and will not let the Modi government make farmers slaves of multinational corporations. He called upon farmers to again come on streets on September 25 in response to the protest called by AIKSCC.

AIKM national secretary Ram Chandra Kulhari led farmers in Jhunjhunu district of Rajasthan. He criticised the BJP government for endangering food security and playing with the lives of the farmers.

The protests were also held at hundreds of places in Bihar including Patna. Protesters said that these bills will not only harm farmers and agriculture, they will also kill India’s PDS (food rations) system which is a lifeline for the poor.

Central Trade Union Organisations have also extended their support to the farmers’ protest call for 25th September, pointing out that the Prime Minister is spreading falsehood to misguide farmers regarding these pro-corporate farm bills.