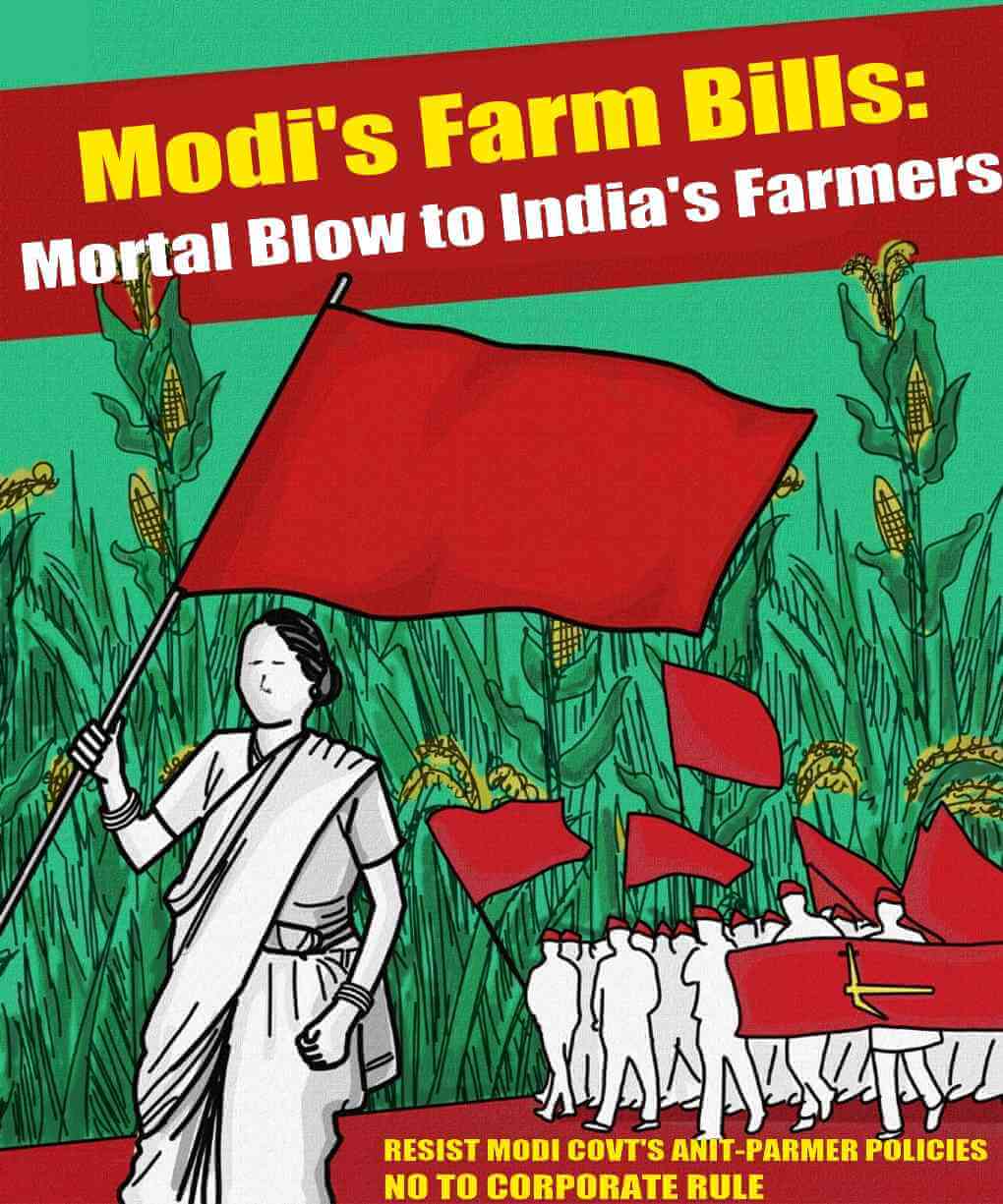 It took India quite some time to decode Narendra Modi’s ‘Achchhe Din’ rhetoric, but his latest ‘Atmanirbhar Bharat’ jumla (empty phrase) is unravelling much faster. For the Modi government, ‘Atmanirbhar Bharat’ has only one meaning – turning the whole of Indian economy into an Adani-Ambani enterprise!

After launching an aggressive campaign of privatization of India’s key infrastructure sectors, the government has now unleashed a war on India’s agriculture and farmers. Agriculture is the only sector which recorded positive growth amidst an otherwise across the board free fall of India’s GDP in the first quarter of financial year 2020-21 (April-June 2020). The government now seeks to hand over the reins of Indian agriculture to corporate agri-business.

The three farm ordinances promulgated for this purpose on 5 June triggered massive opposition from farmers across the country, but as soon as Parliament met for a belated monsoon session, the government turned the ordinances into bills, and then had them ‘passed’ without voting in a complete mockery of parliamentary democracy. By all indications, the numbers in the Rajya Sabha were stacked against the government and when opposition MPs insisted on voting, the live telecast was muted, and the chair declared the bills passed. In a further mockery of parliamentary procedures the Chairman of the Rajya Sabha dismissed the no confidence motion against the erring Deputy Chairman and went on to suspend the protesting opposition MPs. The government has committed daylight murder of parliamentary democracy to subject India's farmers to the slavery of India's new Company Raj.

The government claims about the purpose and implications of the bills are full of deceit and lies. The titles of the bills are also utterly misleading. One of the bills is titled The Farmers’ Produce Trade and Commerce (Promotion and Facilitation) Bill, 2020. Another is called The Farmers (Empowerment and Protection) Agreement of Price Assurance and Farm Services Bill. The government claims that the bills are aimed at freeing farmers from bureaucratic control, expanding their choice about sale of their produce and improving their capacity to get better prices. The government also claims that the bills in no way do away with the existing provisions of minimum support price and the mandis (Agricultural Produce Market Committee) where farmers currently sell their produce.

We can take a look at Bihar, where the Nitish Kumar government had revoked the APMC Act way back in 2006, to understand the implications of the state abdicating its procurement responsibilities. According to data obtained by The Wire through RTI queries, less than 0.1% of estimated wheat production in Bihar was acquired by central and state government agencies in the rabi marketing season of 2020-21. And this is no aberration; the proportion of official procurement has remained less than 2% over the last four years in Bihar. The figures have been equally abysmal for paddy and not much better even for maize. While farmers across the country have been fighting for increased MSP as recommended by the Swaminathan Commission and for timely and assured procurement, the government wants to completely abdicate its responsibility and hand over the reins to private agri-business companies. The continued existence of MSP and APMC on paper will bring absolutely no relief to common farmers when the entire system will be dominated by private players. The implications can thus only be alarming for large sections of India’s agrarian population.

When the Bill talks of promotion of facilitation of trade and commerce, it has private agri-business units in mind which will now have complete freedom to buy from anywhere and store as much as they like. The government would like us to believe that farmers will be equally free, but can farmers ever match the power of the agri-business? The price advantage will thus lie entirely with the latter, and this coupled with their new-found freedom of inter-state trade and unregulated storage will allow them to further tighten their grip. It will not take long for the ‘freedom’ of farmers to trade with mighty agri-business companies to turn into a new form of bondage where the companies will call all the shots. Apart from adversely affecting small farmers and share-croppers who lease in land for cultivation, the new system is also likely to deal a mortal blow to India’s self-sufficiency in foodgrains production and the whole system of food security and public distribution. Once contract farming becomes the dominant mode of agriculture, the pattern of cultivation will be decided by agri-business companies according to their own interests and calculations to satisfy their own hunger for profit and not fulfil the needs of feeding India's billion-plus people. Just as Mukesh Ambani’s Jio has been allowed to grow at the cost of the huge public sector network of BSNL, the Food Corporation of India will also be sacrificed at the altar of major private agri-business players.

The new order will also have major adverse implications for India’s already weakened federal structure. While the states will have no regulatory power over the movement and sale of agricultural produce and lose whatever revenue they used to earn from transactions through the APMC network, all powers will accrue to the Central government and big corporations. The government is celebrating the bills as harbingers of a radical transformation of India’s agriculture and camouflaging this mortal blow as a historic moment of freedom for India’s farmers. It is quite similar to the kind of grand self-congratulatory claims we heard after demonetization and the introduction of GST. By all indications, the upshot of these new ‘bold reforms’ will be as disastrous as the suffering that has followed in the wake of demonetization and GST. We must congratulate India’s farmers for not falling for the government’s deceitful propaganda and for rising in bold resistance. The power of the farmers’ protests has already forced Akali Dal minister to quit Modi’s cabinet and several state governments to voice their opposition. Six years ago, the united protests of farmers and opposition parties had forced the Modi government to withdraw its land acquisition ordinance. Let us make sure that the government is forced to retreat once again in the face of the resolute resistance of the united platform of farmers’ organizations. Every defender of democracy must join hands with India’s farmers to win this battle.