Farmers Struggle for Compensation for Acquisitioned Lands in Bareilly 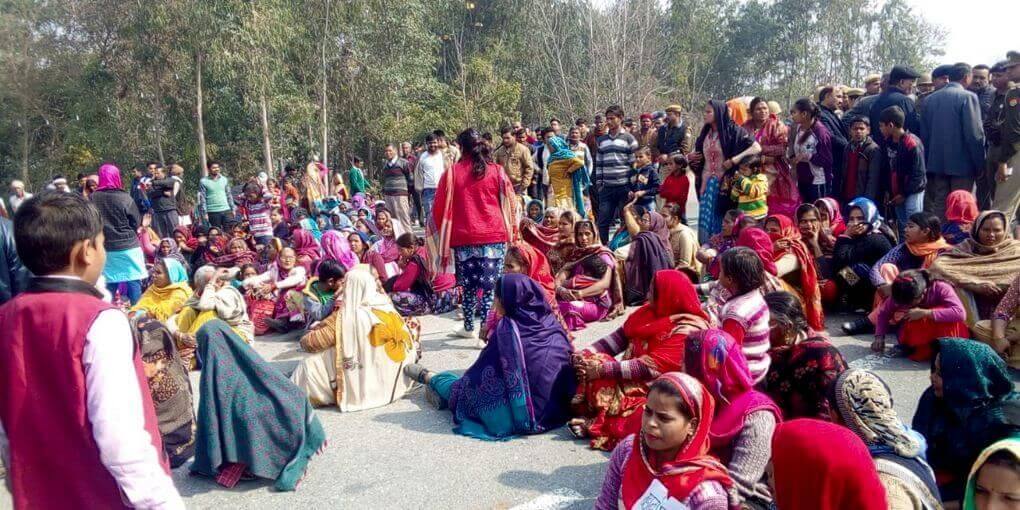 THE farmers who had been affected by land acquisition for the Bareilly Bypass had been fighting for the compensation for their lands for a long time. The acquisition for the land was notified in 2006. This Bypass is a four lane road outside Bareilly on the Lucknow-Delhi national highway. In 2013, the National Highway Authority of India (NHAI) started acquiring the land and paying compensation to the farmers. During the acquisition, the contract regulation of UP which was to be used, was completely discarded and put in waste bin. No consent was taken from the farmers while deciding the compensation and varying rates were arbitrarily decided for the 33 villages included in the acquisition. The arbitrariness and errors in this process can be inferred from the fact that while the circle rate of 2013-2014 was adopted to decide the compensation for Dhantia-Tyulia, circle rate of 2008 was applied for other villages. Not only this, these two villages whose circle rate was Rs. 10 lakh per hectare were given the compensation of 61 and 63 lakh per hectare, while Mudia Ahmednagar, whose minimum circle rate was 33 lakh per hectare was given the compensation of 25 lakh per hectare. The villages of Dhantia and Tyulia were given better deal as they are the village of Union Minister and BJP MP Santosh Gangwar. Even the earlier UPA regime in the centre and Akhilesh Yadav’s government in the state showed this preferential treatment. The farmers struggle against this injustice has been going on since 2013. Since then All Indian Kisan Mahasabha (AIKM) has stood with this struggle. The struggles outside continued as the legal battle for the same were also being fought. The struggle forced the NHAI district administration to enter talks with the farmers. The state government was forced to accept that the solution to this could only be reached through reaching a compromise outside. The district official, accepting the demands of the farmers agreed that the circle rate of 2013-14 would be accepted as the standard rate and also wrote a recommendation letter suggesting the same to the government. However, when despite this the NHAI did not start issuing compensation at this rate, the movement was intensified.

Earlier this year, thousands of peasants participated in protest dharna with the demand of appropriate compensation on 25 January. On 29 January, led by AIKM leader Afroz Alam nearly two dozen peasants, men and women, started a fast unto death and on the following day the highway was jammed by thousands of villagers in their support. The farmers said that while the Modi government spent 300o crores on the statue of Sardar Patel and the Yogi government is spending 4000 crores for the Kumbh, the governments are not willing to pay mere 100 crores to the thousands of farmers who lost their land and livelihoods. The raised the slogans- ‘If no compensation, then no road’ and ‘Our land, your road, will not do’. Hundreds of farmers use to sit at the dharna spot. More and more farmers joined the dharna site by January 31. The administration also raised the number of police deployed in the area. The farmers declared a ‘Kisan Panchayat’ on the site of the hunger strike on 3 February and said that if Union Minister Santosh Gangwar does not come to the Panchayat, then  thousands of farmers including women and children will march 8km to his house and gherao it. The police administration surrounded the hunger strike spot on all sides. On the day of the Panchayat, CPIML CC member Krishna Adhikari, AIKM National Secretary Purshottam Sharma and Peasant leader from Pilibhit Baburam Verma also joined the Panchayat and addressed it. Santosh Gangwar, was forced to come to the Panchayat, and assuring that their demands would be met, he called for talks on 7 February in his presence. On 7 February the talks took place and it was decided that the district officer would prepare a proposal and present it to Union Transport Minister, Nitin Gadkari. On 13 February, Santosh Gangwar and Nitin Gadkari met the farmers and on 14 February, the Chief General Manager (land acquisition) also joined the talks. The farmers have decided to continue the agitation till the final victory and AIKM leaders Harinandan Singh and Afroz Alam continue to lead the struggle.