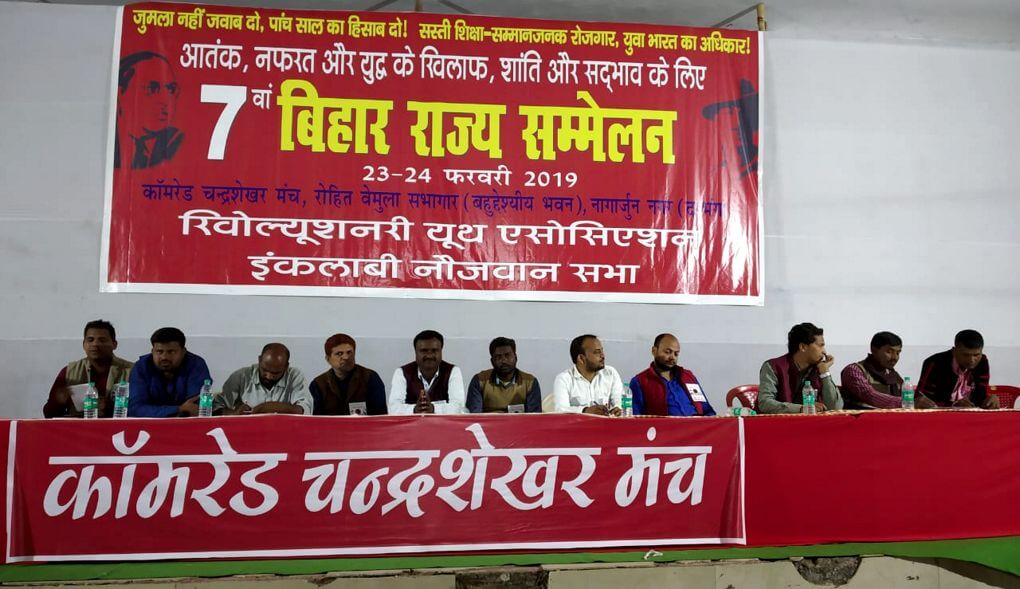 THE 7th Revolutionary Youth Association Bihar State Conference was held on 23-24 February 2019 at Darbhanga with the call for affordable education and dignified employment for youth. Hundreds of students and youth participated enthusiastically in the conference which was preceded by a motorcycle rally and garlanding of statues of Shaheed Bhagat Singh, Dr Ambedkar, people’s poet Nagarjun and Communist leader Comrade Bhogendra Jha.

Addressing the meeting, All India Kisan Mahasabha National General Secretary and CPI (ML) Polit Bureau member Com. Rajaram Singh said that currently the government is openly using key institutions like the Judiciary, Election Commission, CBI and Statistical Commission against opposition parties and against justice. After the Modi-led government came to power in 2014 with a full majority, the BJP has pursued policies to capture a monopoly on power, to work for the benefit of corporate companies, and to make India a fascist Hindu Rashtra. To do this, the BJP has established a monopoly over democratic institutions like the Constitution, law, judiciary, bureaucracy, citizens’ rights, media, and educational institutions. The BJP is systematically destroying institutions which the people had obtained through great sacrifice.

PB member and AIARLA National General Secretary Com. Dhirendra Jha said that the youth of the country, like the farmers, are being forced to commit suicide. Decisions like demonetization and GST have shattered the economy, causing even more distress in the already crisis-ridden agrarian sector. The BJP government in power today is snatching away employment from youth and rights to land, housing, food, education, health and pension from the common people, while at the same time practicing the politics of hatred in the country. National heritages, resources, and public sector companies are being sold to corporate companies. Hate and frenzy is being spread by distorting history. Attacks on knowledge and science have being escalated. The country is being shamed across the world by people in power not just shielding rapists but actually holding rallies with the tricolor in defence of rapists. 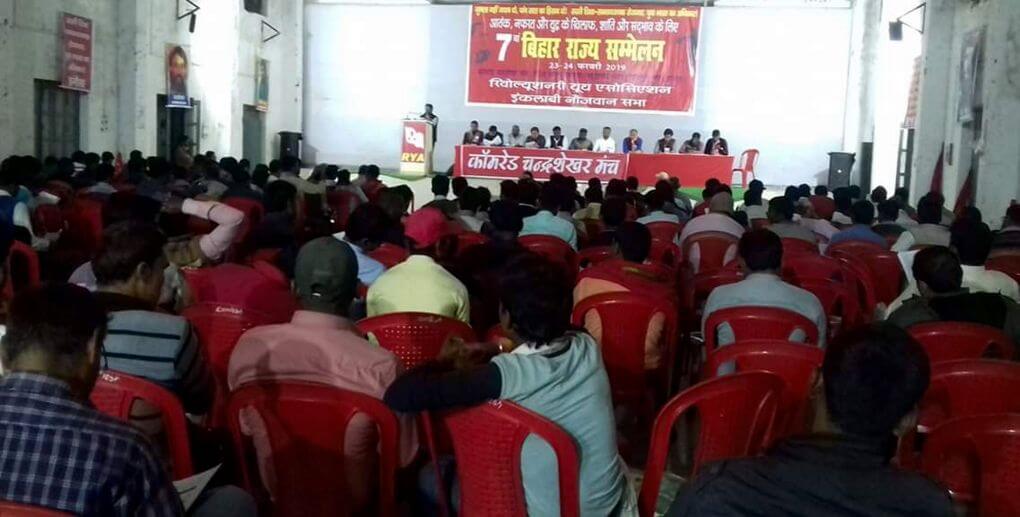 RYA National President Com. Manoj Manzil said that this conference is being held at a time when the entire country is grieving over the death of more than 40 CRPF jawans in a suicide attack on 14 February on the Jammu-Srinagar National Highway. Prime Minister Modi was boasting that demonetisation had finished terrorism, but this is the third big terrorist attack, after Pathankot and Uri, during his regime. We need to ask the Prime Minister why he has played with the lives of the country’s jawans. PM Modi, who boasts about his patriotism, came on a Bihar visit on 17 February but did not even bother to meet the families of the two sons of Bihar who were martyred in the Pulwama attack. The Prime Minister and his entire gang are busy warmongering and inflaming passions, and inciting attacks on Kashmiri youth and Muslims. All this is being done to divert attention from the appalling unemployment rate, the promise of 2 crore jobs, black money, the Rafale scam, the lies about ‘achhe din’ and ‘vikas’ (development), and the destruction caused by demonetisation and GST. This is being done to break the unity of workers, farmers and youth agitating for their rights.

RYA National General Secretary Com. Niraj said that from the time the Modi government came to power, University students and youth have been struggling inside and outside campuses. A strong movement was organised at Punjab University against fee hike during which the BJP government slapped sedition cases on students. The movement started by students against the institutional killing of Rohith Vemula is spreading across the country as a movement against issues like employment and the privatisation of education. Dalit organisations organised an unprecedented Bharat bandh against the Modi government on 2 April 2018 against the amendments to the SC/ST Act. Thousands of youth marched from the Red Fort to Parliament on 7 February in the ‘Young India Adhikar March’. The youth of Bihar played an important role in all these struggles.

Bihar State ASHA Karyakarta Sangh President and AIPWA State Secretary Com. Shashi Yadav said that the Modi government has created a fascist environment in the country. The character and face of the fascist RSS-BJP gang is deeply Manuvadi, communal, anti-woman, and anti-minority. India, one of the biggest countries in the world, has become tainted during the BJP regime.

The meeting was conducted by RYA District Secretary Keshari Kumar Yadav. Hundreds of students and youth participated in the conference.