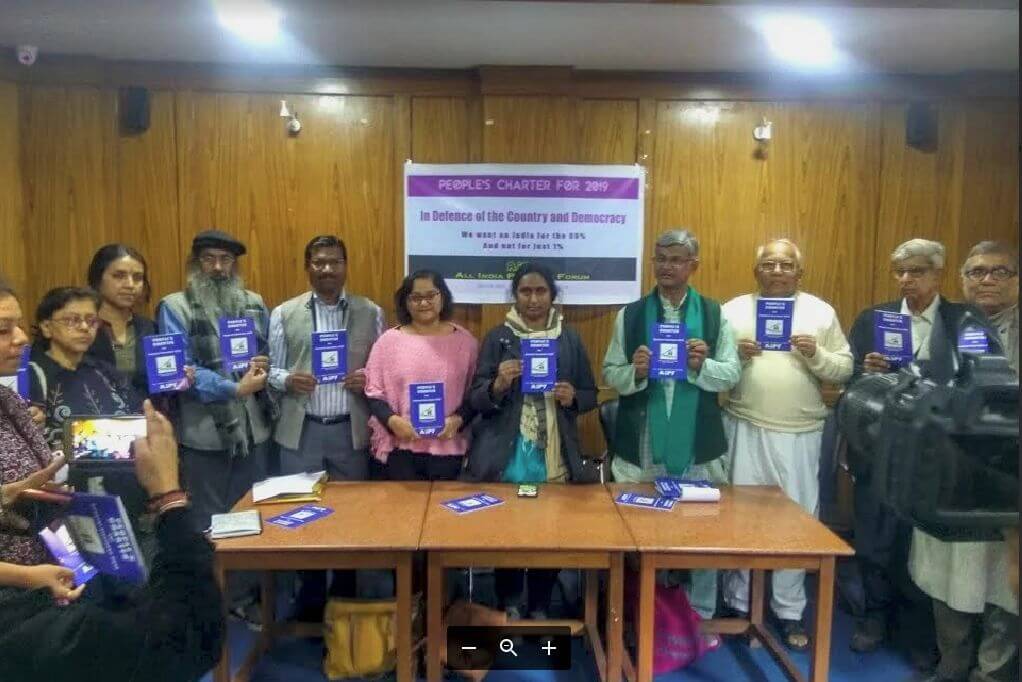 Prior to the release of the manifesto, Com. Kavita Krishnan in her address said that the manifesto was to be released earlier on 16-17 February, however the release was postponed in order to pay tributes to the jawans killed in Pulwama attack. Today when the manifesto is being released, there are attempts to create an atmosphere of war in the country and a pilot of our Air Force is in the captivity of Pakistan. Today everyone can see that instead of attempting to calm the atmosphere of war frenzy, PM Modi and other BJP leaders through the ‘Mera booth Sabse Mazboot’ campaign and launch of ‘Khelo India app’ are instead busy in election preparation trying to convert war frenzy into votes. The PM must tell who is responsible for unemployment, failure to stop farmer suicides, attacks on workers, and women, dalits and minorities being forced to live in fear. The responsibility for these cannot be hidden by creating war frenzy.  Socialist leader Sunilam said that war can never be a solution to any problem. This will also ensure losses for both the nations. The Modi government soon after coming to power started working for the corporate which started with bringing an ordinance on the Land Acquisition Bill.

The leader of ‘Save Adivasis and Forests Movement’, Xavier Kujur said that the attacks on the adivasis have been highest under the Modi government. It is because of the apathy of the Modi government that today while adivasis are not being given their land under the Forest Rights Act but instead there are attempts to displace them.  Senior journalist Bhasha Singh emphasized the need for all like thinking forces to come out openly against the war frenzy. She also added that the way PM Modi pretends to wash the feet of the sanitation workers, it is only an attempt to strengthen the structures of the caste system. JNUSU President N. Sai Balaji said that while the government and media is trying to fuel the war frenzy, what indeed must be investigated is that who is responsible for putting the lives of Jawans at risk by not ensuring sufficient security for the forces despite having intelligence reports.

After all the speakers had addressed the press conference, the citizens charter was released and it was decided that a campaign will be organized which will ensure that people’s real questions and the attacks on the country’s Constitution, democracy and the basic rights of various sections by the BJP and Modi Government in the last five years are the main agenda of the elections.  The manifesto was also released in other states of the country. The AIPF National Council said that the upcoming Lok Sabha elections will be decisive for the democracy in the country. The people of the country and we have a responsibility to ensure the government that is elected that will safeguard the Constitution and the secular structure of our country and address the basic questions of the people. AIPF will try to ensure the all the opposition parties adopt this people’s manifesto. They appealed to all to join this campaign and shared that the campaign had the support from the farmers’ movements, workers’ movements, student-youth movements, employment rights movements, dalit movements, women’s movements, human rights movements and other citizens’ movements.

The manifesto of the people of India:

For the elections of 2019, the main aspect of the Indian people’s manifesto is that we want an India for the 99 precent citizens, and definitely not an India for just one percent. The demands of the people are: