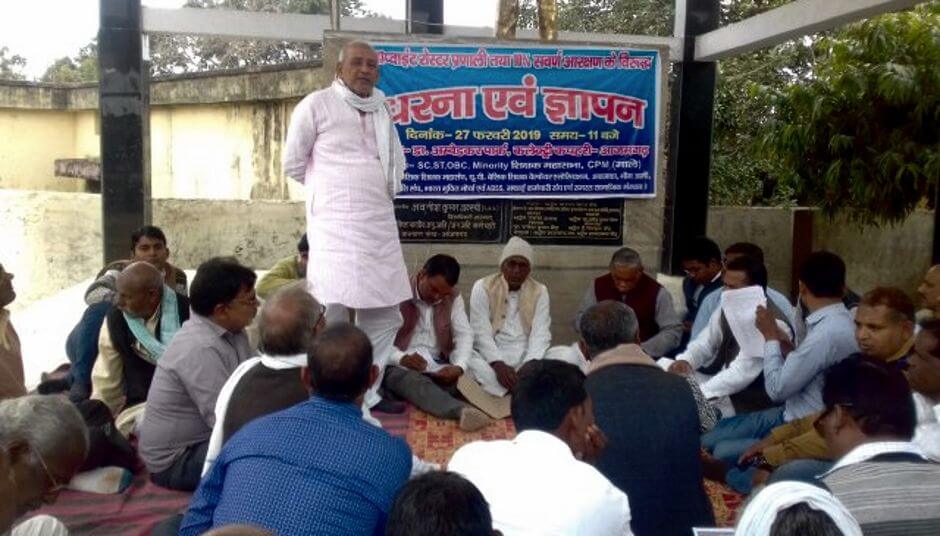 ON the initiative of CPI (ML), several social, teachers and workers’ organizations came together to protest against the 13 point roster and 10 percent reservation for the general category on 27 February in front of the Azamgarh district headquarters in Uttar Pradesh.  They also submitted a memorandum addressed to the President to the district officials. Organisations participating in the protest included SC/ST, Backward and Minority Teachers Association, UP SC/ST Basic Shikshak Mahasangh, UP Basic Teachers Welfare Association, Bhim Army, Buddh Jyoti Sangh, Bharat Mukti Morcha and others. Senior CPI (ML) leader Com. Jaiprakash Narayan elaborating on the problems of the 13 point roster system said that replacing the 200 point roster with the 13 point roster is an attack on the rights of the Dalits, backward castes, adivasis and minorities. This is a clear conspiracy to end reservations. He said that if we see the five years of the Modi government, it is clear that there are systematic attacks on the rights of every section and all democratic institutions. The current step is only a new addition to the ongoing series of attacks. Com. Omprakash Singh, member of state local committee said that the way nearly all parties supported the 10 percent reservation for the general category, it is clear that most are standing against the core value of the Constitution which was to provide reservation for the social and educationally deprived. Together, the 13 point roster and 10 percent reservation for general category are aimed at ending the reservation for the socially marginalized. Chairing the protest meeting, Ramdavar Ram, leader of SC/ST, Backward and Minorities Teacher Association said that this is just the beginning and soon all social, democratic, SC-ST and OBC organizations will begin a strong movement on the ground level. The memorandum submitted included the following demands- (i) bring an ordinance to immediately end the 13 point roster and 10 percent reservations, (ii) make laws for ensuring reservation during promotions, (iii) implement reservation in private sector, (iv) fulfill the backlog and all empty posts. Resolutions were also passed to demand- (i) an end to incidents like Pulwama attack and the fuelling of war frenzy and (ii) bringing of an ordinance to stop the displacement of adivasis from the forests. Hundreds of people joined the protest.