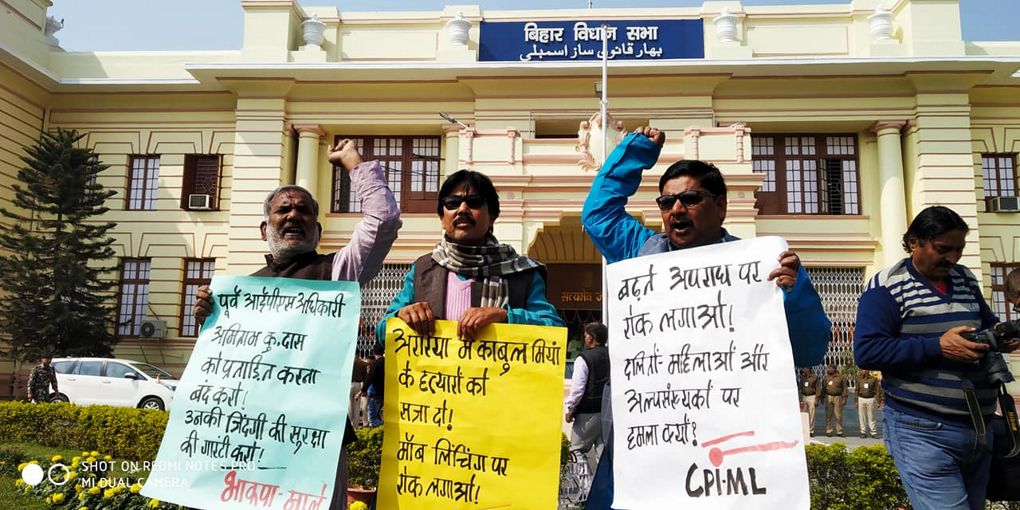 THE CPI (ML) MLAs took some notable initiatives in the Bihar Assembly during the recently concluded Assembly session. They held the government accountable in many burning issues and also achieved a concrete victory on the issue of honorarium for Rasoiyas. The legislative team repeatedly raised the issues of Rasoiyas agitating since 7 January, built pressure on the Chief Minister, and finally succeeded in having the honorarium raised by Rs 250. The siege of the government was kept up through starred questions, adjournment motions and zero hour.

Apart from the Rasoiya issue, other demands raised by the CPI (ML) MLAs included: CM’s resignation in view of the enquiry on the CM ordered by the Muzaffarpur POCS court; end to eviction of the poor without prior alternative arrangements; Rs 6000 wage guarantee in MNREGA. The other issues raised in the Assembly session by the legislative team were: oppression of ML activists  in Jamui under the guise of calling them Maoists; demand to arrest Arariya mob lynching victim Kabul Miyan’s killers; put a stop to incidents of mob lynching; unconditional and immediate reinstatement of sacked Patna Police Lines police personnel; guarantee safety of former IPS officer Amitabh Kumar Das; reinstatement of the 200 workers removed from Jasoiya Cement Factory; reinstatement of massacre victim Lalan Kumar in Arwal District; restart closed primary schools without delay; control sand mining; stop dam construction on Nagar River in Katihar; guarantee paddy purchase; establish Degree College in Darauli; legal rights for Shikmi sharecroppers and all other sharecroppers; payment to sugarcane farmers for their crops and stop short-weighing their crops; government weighing machines near sugar mills; minimum Rs 3000 old age pension; boundary for graveyard in Chainpur (Kaimur).

The February session is a Budget session, but this time it was very short. The first day began with the Governor’s address. The CPI (ML) MLAs called it a package of lies and walked out in protest, appealing to the Governor not to read it in the Assembly. After this, the government presented the economic survey and vote on account. Here also our MLAs put forth their views strongly and asked how the government could claim this kind of development when they are saying that the agrarian development rate is zero. During the session, the Bihar government proposed 10% reservation for the economically weak, which was opposed by the CPI (ML) legislative team.

On 12 February our MLAs demonstrated with posters in support of the ongoing Rasoiyas’ agitation. On the same day they presented an adjournment motion in the Assembly on the Rasoiya issue. While the motion was rejected, they got permission to place it in the House. This lent strength to the Rasoiyas’ demands and opened the way to a dignified agreement with the government.

On 13 February poster-demonstrations were held on the issues of rising crime graph, attacks on women, dalits and minorities, and incidents of mob lynching. These issues were also presented in the adjournment motion. Such crimes are on the rise in Bihar. Recently Kabul Miyan was beaten to death on the accusation of being a Bangladeshi infiltrator and a cow thief. The BJP-RSS is trying to inflame communal passions across Seemanchal. Earlier too, incidents of mob lynching in various parts of the State have come to light. The government and the police claim to uphold the rule of law, but the truth is that 7 to 8 murders are taking place daily. According to a report by the Special Branch, former IPS officer Amitabh Kumar Das is being targeted by the Ranveer Sena and his life is in grave danger. The incidents of rape have not decreased. It appears as if there is no such thing as rule o f law in Bihar. Therefore, the CPI (ML) MLAs demanded a discussion in the House on this extremely important issue.

On 14 February our MLAs very strongly raised the issue of eviction of the poor without alternative arrangements across Bihar including Eastern Champaran. In the motion raised by them they said: 2, 37000 parcha-holders are being looted of their land there. Instead of constituting a land tribunal, the Nitish government has put the DM and SP and lower officials to the task of evicting the poor and ending forever their legal claims to land in the name of ending land disputes. Slapping false cases on the poor and their leaders and threatening them has become the main job of the police. Only recently, hundreds of poor in Maintand, Chiuntaha, Singhpur, Parsauni and other villages have been slapped with false cases for the purpose of evicting them from their lands. Similarly, hutments of mahadalit-poor have been razed in Bank in Beguserai and looting and arson carried out. People agitating against eviction in Runni Saidpur (Sitamarhi) were attacked with bombs, killing one person. From the cities to the villages, the government is carrying out an evict-the-poor drive. This issue was also raised in Zero Hour. 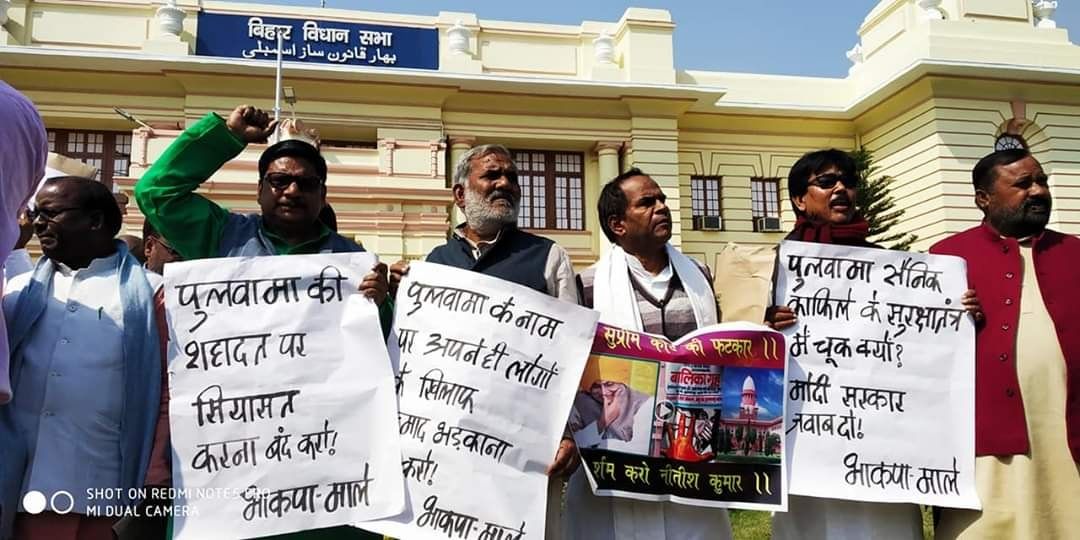 On 15 February the CPI (ML) MLAs paid tribute to the martyrs of Pulwama and demanded the adjournment of the House as a mark of respect, but the Speaker did not give permission for this. Later, MLA Satyadev Ram proposed an adjournment motion on the issue of MNREGA. He said that MNREGA gives each family the Constitutional right to 100 days’ work. The Bihar economic survey 2018-2019 presents a dismal picture in the poverty-stricken State. 1.3 job cards were issued in 2013-14. Only 6% of the job card holders were able to procure employment. According to the government’s own report, this statistic fell to 0.7% in 2017-18. The claims of good governance are high, but the distress of the poor is only increasing. MNREGA workers are not getting minimum wages, and large scale migration from Bihar continues. He demanded that the government must guarantee Rs 600 per day and 200 days’ work for MNREGA workers.

On 18 February the CPI (ML) MLAs vigorously attacked the State government. They protested with the demand of Nitish Kumar’s resignation in view of the POCSO court’s order for an enquiry on the Chief Minister in the Muzaffarpur shelter home case. An adjournment motion on this issue was also proposed. In Zero Hour, the BJP’s attempts to incite hatred and attack the people of our own country were placed on the floor of the House. On the same day, the issue of failure to purchase paddy in Bihar was also raised.

On 20 February also, the CPI (ML) MLAs laid siege to the government on many issues. Their demands included reinstatement of teachers and workers in non-funded Degree and Inter Colleges, land for Community Halls in Mahadalit Tolas, and other issues. In spite of being small in number, the CPI(ML) legislative party maintained its initiative and commitment inside the House and succeeded in making the government bow down on some issues.