‘Save the Constitution, Save Democracy’ Dharna 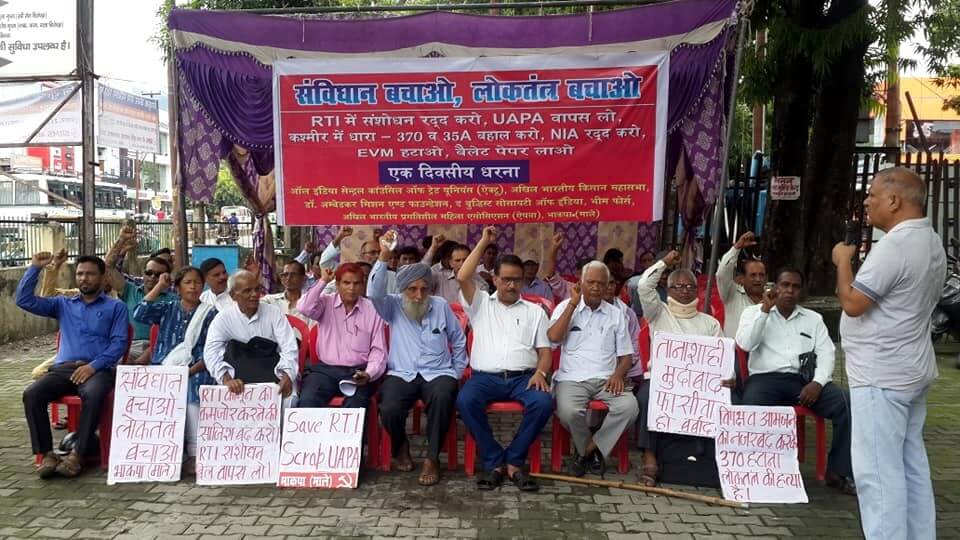 A one-day ‘Save the Constitution, Save Democracy’ dharna was organized jointly by AICCTU, Kisan Mahasabha, AIPWA, Dr Ambedkar Mission and Foundation, The Buddhist Society of India, Bhim Force, CPI(ML), CPI, and various social activists and organizations on 14 August 2019 at Buddha Park, Haldwani against the undemocratic and unconstitutional behavior of the Modi government.

Addressing the dharna, AICCTU National Vice President Raja Bahuguna said that the Modi-2 government is snatching away constitutional rights under the excuse that it has got a huge majority. The Modi government has weakened and crippled the RTI Act because they do not want anyone to be able to question them. Article 370 was a permanent provision of the Constitution, as confirmed by the Supreme Court. But today ‘Kashmiriyat’ is being crushed underfoot Army rule. This attack on ‘Kashmiriyat’ is an attack on the Unity-in-Diversity identity of the country. The Modi government is dividing India’s unity and creating a Hindu-Muslim divide in the name of fulfilling the ‘Hindu Rashtra’ dream of Shyama Prasad Mukherjee who had sided with the British during the Quit India Movement in 1942. All democracy-loving and patriotic Indians should embrace the ideology of Bhagat Singh and Ambedkar in order to fight fascism; and ‘Naye Bharat ke Vaaste-Bhagat Singh-Ambedkar ke Raaste’ (A New India through the path of Bhagat Singh and Ambedkar) is the need of the hour.

Dr Ambedkar Mission and Foundation President GR Tamta said that the Modi government is imposing fascism on the people of the country through privatization of the railways, amending and crippling the RTI Act, and imposing draconian laws like UAPA and NIA to brand as ‘terrorist’ and ‘anti-national’ those who raise their voice against anti-people policies. 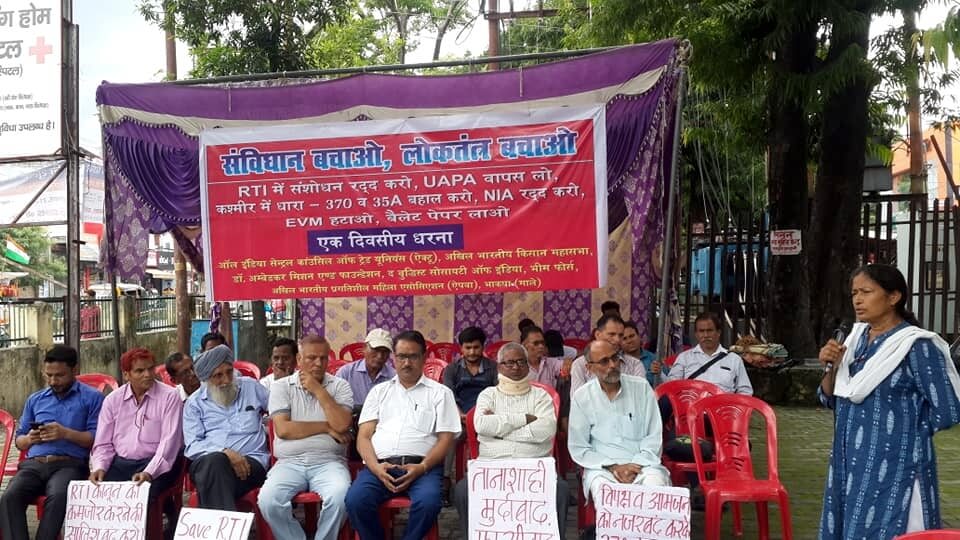 AIPWA Convener Vimla Rauthan said that the aim of abrogation of Article 370 and 35A in Kashmir is to create a huge Hindu-Muslim divide and win future elections. AIKMS State President Anand Singh Negi said that the only alternative today is to go among the people with the slogan ‘Save the Constitution, save Democracy’ and organize and mobilize mass protests. Journalist and social activist Sartaj Alam said that the BJP government wants to do away with the concept of a federal democratic India.

At the conclusion of the dharna a 5-point memorandum was submitted to the President of India through the Deputy Collector with the following demands: save the RTI Act; revoke UAPA; reinstate 370 and 35A; stop communal polarization in the name of NIA; remove EVMs and bring back ballot papers.

A one-day dharna was held at Begusarai Collectorate against the undemocratic abrogation of Article 370 in Kashmir and to demand the unconditional release of CPIML leader Zeeshan Ali. The dharna was addressed by Kisan Sabha National Vice President Shivsagar Sharma, CPIML District Secretary Diwakar Kumar and others. Comrade Shivsagar Sharma said that the country is going through a time of grave crisis, with all democratic institutions under attack. The abrogation of Article 370 in Kashmir is a clear indication of fascism. The people who are today celebrating the government’s attack on Kashmir’s autonomy will suffer the same fate tomorrow. Comrade Shivsagar also spoke about the government protection to the Unnao rapists. He demanded the unconditional arrest of youth leader Zeeshan Ali and the declaration of Bihar as a drought-affected area.

Comrade Diwakar Kumar said that the Begusarai District administration is betraying its promise by evicting the poor from land for which they hold parchas. He said that the government’s Jal-Nal (tap water) scheme has become corruption-ridden and demanded a probe. The dharna concluded with a 9-demand memorandum to the District Collector.