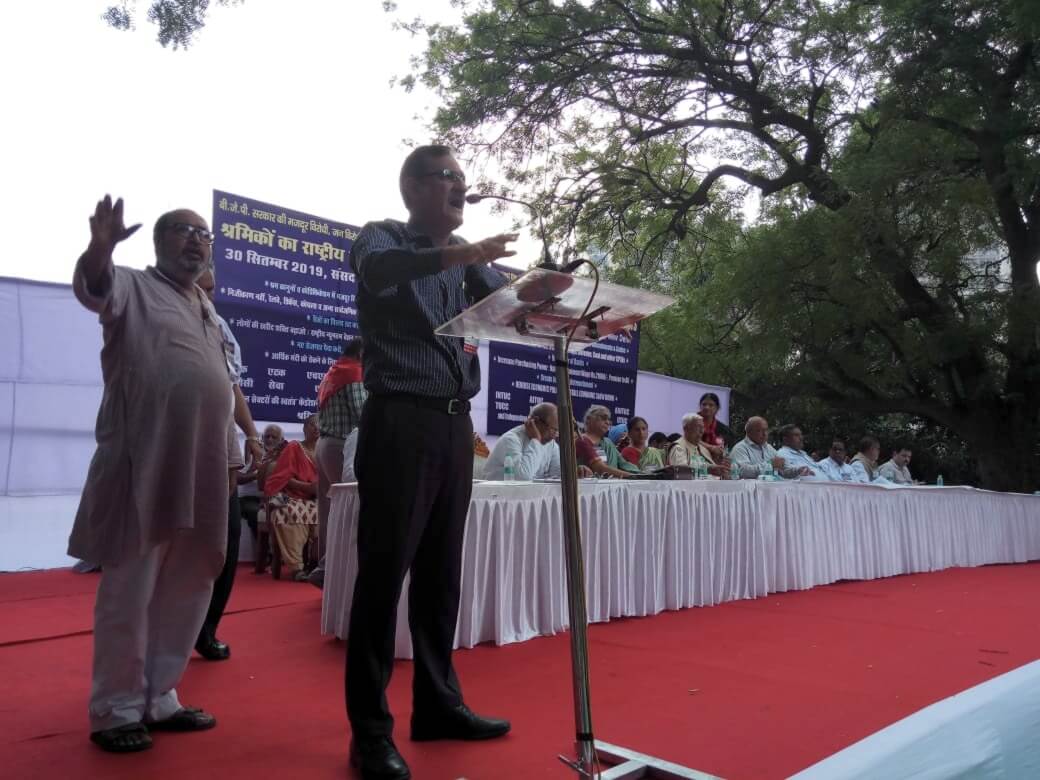 INTENSIFYING further the ongoing battle of working class against attacks of Modi govt., a national convention of workers was held on 30th September 2019 at Parliament Street, New Delhi calling upon the workers and toiling masses to organize a one-day country-wide general strike on 8th January 2020. Unprecedentedly, within a short period of just 100 days of Modi govt. the country has witnessed powerful country-wide working class actions against corporatization/privatization, 100% FDI, NPS and Codification of labour laws, notably the 5-days strike by Defence workers, one-day unprecedented strike by Coal workers and continuous struggle by workers, along with their families, of production units of Railways.

This convention against anti-worker, anti-people and anti-national policies of Modi govt. was called by the platform of 10 central trade unions, which has been spearheading the united workers’ struggle for a long time. The platform includes: AICCTU, INTUC, AITUC, HMS, CITU, AIUTUC, TUCC, SEWA, LPF and UTUC along with Independent Federations, Associations and Unions of Workers and Employees. “Scrap the anti-labour, pro-employer labour law amendments and Codes; No to Privatization, Retrenchment, 100% FDI and Merger of Banks; Increase Purchasing power of common people and Create jobs” was the clarion call of the convention. 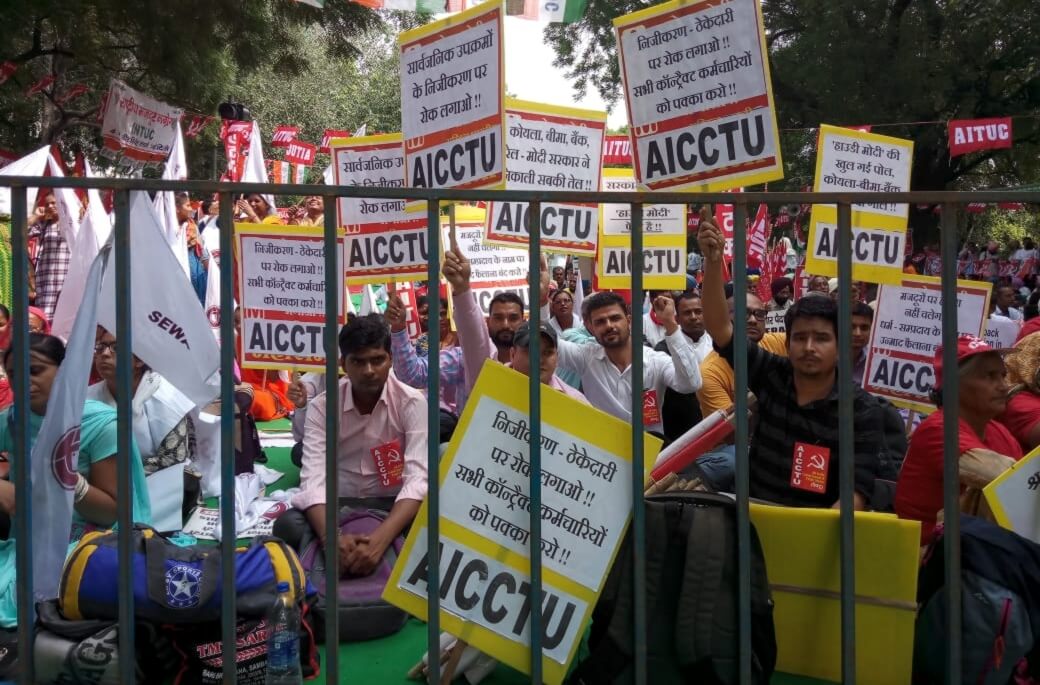 The Declaration adopted by the convention castigated the Modi-led BJP Government for ruining the country and its people within 100 days of its second term in Office further aggravating economic slowdown, job-losses & unemployment, widening and deepening impoverishment, decline in average level of earnings, reckless privatisation and handing over national productive assets to foreign companies, destruction of indigenous manufacturing capabilities leading to deindustrialization and abnormal rise of economic inequality in the society to an obscene level, and on the top of it adorning the corporate, looters of the nation, with term as ‘wealth creators’ and gifting them the stimulus package to the tune of Rs. 1.45 lakh crores in the name of economic slowdown, instead of acting on increasing purchasing power of common people - mocking at the slogan of “Sab ka saath, Sab ka vikas”. The Declaration said that now, with a greater arrogance, the same destructive economic policies targeting the democratic rights and livelihood of the mass of the people are being pursued, setting in motion further worsening of the situation. And more undemocratically than ever before – be it the passing of Wage Code Bill, introduction of Code on Occupational Health, Safety and Working Conditions, amendment to the RTI Act to cripple it, and the amendment to Unlawful Activities Prevention Act to make it even more draconian and vindictive. The Article 370 has been abrogated by gagging the people of J&K putting it under military siege for past two months, rendered lakhs of people homeless/stateless through the NRC process. And now many BJP ruled states have been advocating for NRC process to divide people on communal lines. At the same time, Communal forces have been given free hand which are cultivating an atmosphere of conflicts within the society on non-issues, helping the government to deflect the attention of the masses from core issues of unemployment, run away price rise etc. They are seeking to disrupt the unity of the workers and the toiling people in general. This ongoing destructive process must be combated for the unity of the people, by the united resistance. 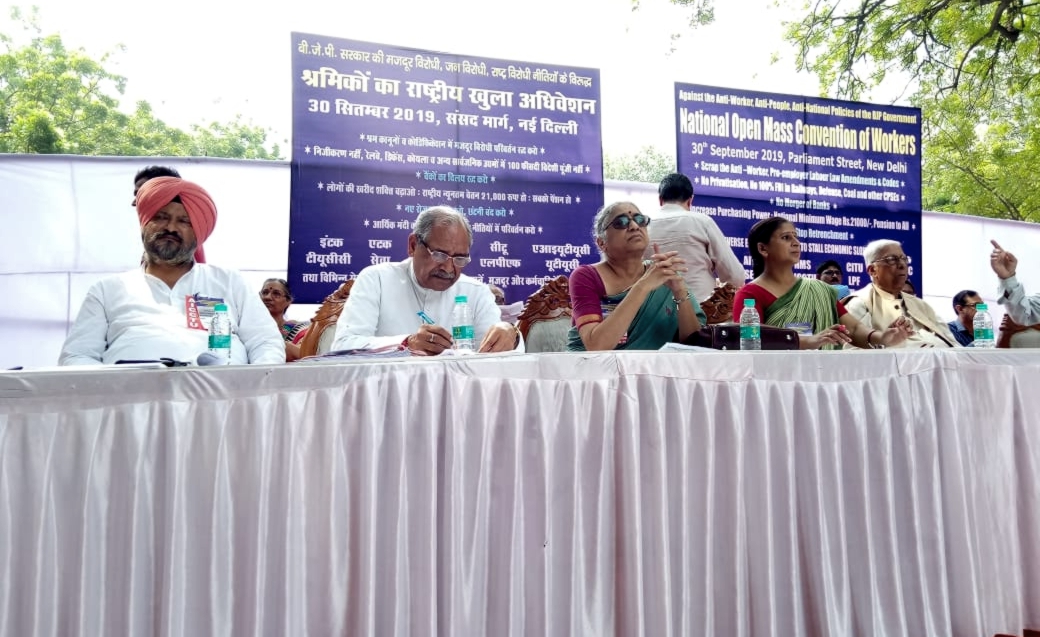 The Convention has demanded National Minimum Wage of Rs.21,000/- pm (as per the current Cost of Living Index), Rs.10,000/-pm minimum pension for all by Government funding, effective  Employment Guarantee Act to cover all rural and urban households, implementation of MNREGA with increased number of days and budget allocation, increased public investment to mitigate rural distress, remunerative price as per the Swaminathan Commission recommendations for the agriculture produce with procurement facilities and loan waiver of the peasantry, permanency of employment in decent work, Worker status for all Scheme Workers as unanimously recommended by the ILC, abolition of contract system and regularisation of contract workers, equal pay and benefits for equal work and implementation of Sustainable Development Goals.

The convention has resolved to make the strike call a great success by Programme of Action over the next three months including Joint Conventions of Workers at Sectoral, State, District Levels during two months of October and November, 2019; and Widest possible circulation of Declaration down to factory, establishment, institution and base level through the above activity during December, 2019.

The convention was attended by more than 3000 workers’ representatives and activists from organized and unorganized sectors. AICCTU cadres from Delhi, Punjab, Uttarakhand, Noida, J&K and many other states and public sector undertakings including the Railways participated in large numbers.