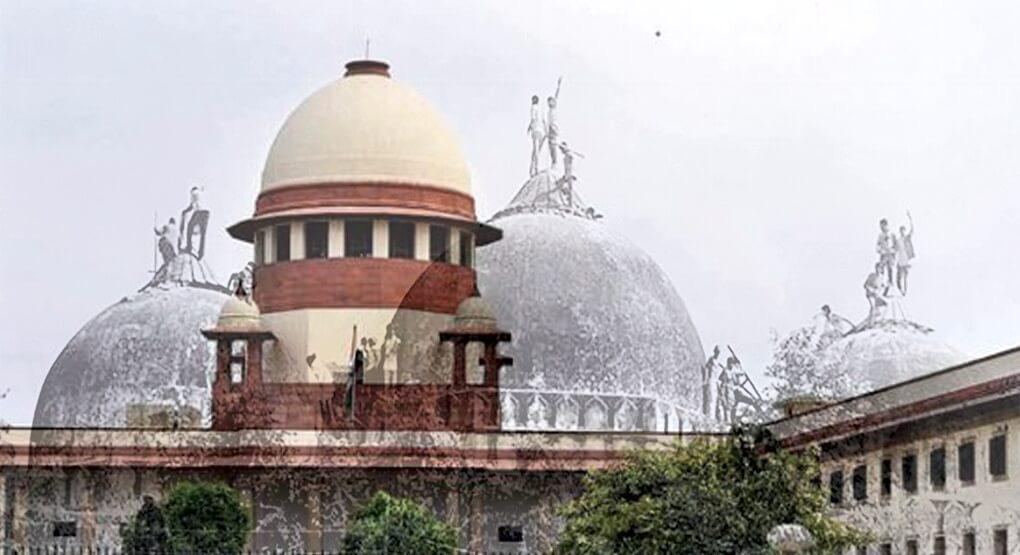 THE politics of the early 1990s was framed by the stealthy 1949 act of placing a “Ram Lalla” (baby Ram) idol inside the Babri Masjid, followed by a violent campaign which culminated in the demolition of the Babri Masjid by a fascist mob led by top BJP leaders. During this campaign, and immediately after the demolition of the mosque, Muslims were massacred by communal mobs all over North India. The Ayodhya ‘dispute’ was ostensibly about whether or not Babar demolished a Hindu temple marking Ram’s birthplace, to build the Babri Masjid. But in fact the intention of the campaign was to build support for the RSS’ key fascist idea: that India belonged to Hindus – and Muslims must accept their secondary status if they wanted to live in India. The Sangh’s and BJP’s Mandir campaign slogans openly voiced the threat that if Muslims wanted to live in India, they must accept Ram as their God. The more violent slogans openly called for genocide of Muslims. The Babri Masjid demolition day is celebrated by the fascists in India as a day of “victory” over Muslims – accompanied by their vows to raze to the ground every ancient mosque or Muslim structure in India. This hate campaign established the BJP as a significant political player in Indian politics, for the first time.

The criminal cases against the perpetrators of the Babri Masjid demolition and the communal violence unleashed against Muslims in its wake, are yet to come to trial, even after nearly three decades. But in November 2019, the Supreme Court verdict was delivered in a civil title suit over the ownership of the land on which the Babri Masjid had stood. This verdict came out when those who perpetrated and benefited from the demolition enjoy almost unchallenged power in India, and are moving fast in the direction of turning secular, democratic India into a fascist Hindu Nation. Every now and then, on the streets of Modi-ruled India, a Muslim is lynched by a Hindu-majoritarian mob that demands that he chant “Jai Shri Ram” (Victory to Ram). The Modi regime plans to amend India’s citizenship laws and implement an all-India National Register of Citizens, to endanger the citizenship status of Muslims. The fascist aims of the Babri Masjid demolition are very close to being achieved, and India’s democracy is facing the most dire crisis of its life. In this backdrop, SC verdict had a chance to stand for the Constitutional principles of secularism, democracy, and justice. It had a chance to make the point that the judiciary is a guardian of the Constitution and not the handmaiden of the powerful. That chance has been lost. Instead the SC has delivered an incoherent verdict that fails to be convincing.

Contrary to norms, the Ayodhya verdict by a five-judge Bench strangely bears no signature. None of the five judges wanted to claim authorship of the verdict in such a significant matter: this raises the question of whether the judgement failed to convince the judges.

The SC admits that the breaking of the locks of the Babri Masjid and placing of the idols inside the mosque was a criminal act. It also admits that the Babri Masjid demolition was an “egregious crime.” It accepts that there is no evidence that a Ram temple was demolished to make way for the Babri Masjid. It asserts that the verdict in the title suit must be based on facts, not faith. Its decision to award the entire land to the Centre for the construction of a temple and allocating five acres of land in a nearby site for construction of a new mosque in place of the demolished mosque, is inconsistent with the evidence it has presented.

The SC bases its decision on the argument that between the mosque’s construction in 1528 and the advent of colonial rule in India in 1857, Hindus worshipped in the outer courtyard but also had access to the inner courtyard. The SC chose not to read this as evidence of Hindus and Muslims praying next to each other without conflict. Instead it concluded that the Mosque side had failed to establish that it had exclusive ownership and access to the site! So the Muslims were, in effect, punished for allowing Hindus access to the Mosque for centuries. But the Temple side too had failed to prove exclusive ownership and access to the site. The Temple side had moreover failed to show evidence for any of its contentions or talking points. It had failed to show evidence that a temple existed, that it was a Ram temple, that the site was accepted as the birthplace of Ram, or that such a temple was demolished by Babar. The SC accepted that no evidence of the existence of the temple, or of its demolition, was presented, and that the placing of the idols in the mosque was a crime. Awarding the entire site for a temple does not fit the facts observed by the SC itself.

The SC verdict has allowed the perpetrators of the “egregious crime” of the Babri Masjid demolition, to profit from the crime. In doing so, it has offered a dangerous incentive for such crimes. Had the Babri Masjid been standing, it is clear that the SC would not have ordered its demolition to make way for a temple. The temple has got the land only because the demolition (flouting a Supreme Court order) had already taken place. Already, the VHP and other Sanghi far-right outfits have begun to list all the other mosques or mausoleums (Varanasi, Mathura, even the Taj Mahal) they plan to claim for temples. The verdict has emboldened them to believe that if they demolish the mosques/mausoleums, their legal claims to those sites will be strengthened.

27 years after the fascist spectacle of the Babri Masjid demolition and the massacre of Muslims in its wake, Courts have failed to complete the judicial process and punish the perpetrators. Instead, the perpetrators are today claiming victory and vindication thanks to the SC verdict in the title suit. It is deeply unacceptable that most Opposition parties are welcoming this verdict in the name of “closure” in a vexed dispute. Closure cannot come without truth and justice.

The Supreme Court and the Election Commission must also ensure that the verdict is not allowed to be used as political fodder in the Jharkhand elections where the code of conduct is in force and nominations have already begun.

We appeal to the peace- and justice-loving people of India to make sure that harmony is maintained and the country does not see a repeat of the communal bloodbath of the 1990s unleashed in the name of building Ram Mandir in Ayodhya. Forces of democracy and justice must make sure that the Sangh brigade is not allowed to unleash a triumphalist frenzy in the name of the temple, further terrorising and disenfranchising minority communities, and distracting from the pressing agenda of livelihood, employment and other basic rights of the people. Liberty, equality, fraternity and justice are the four constitutional pillars of our democratic republic and we must not allow this verdict to embolden the Sangh-BJP brigade to continue its project of demolishing the constitutional foundation of our republic.