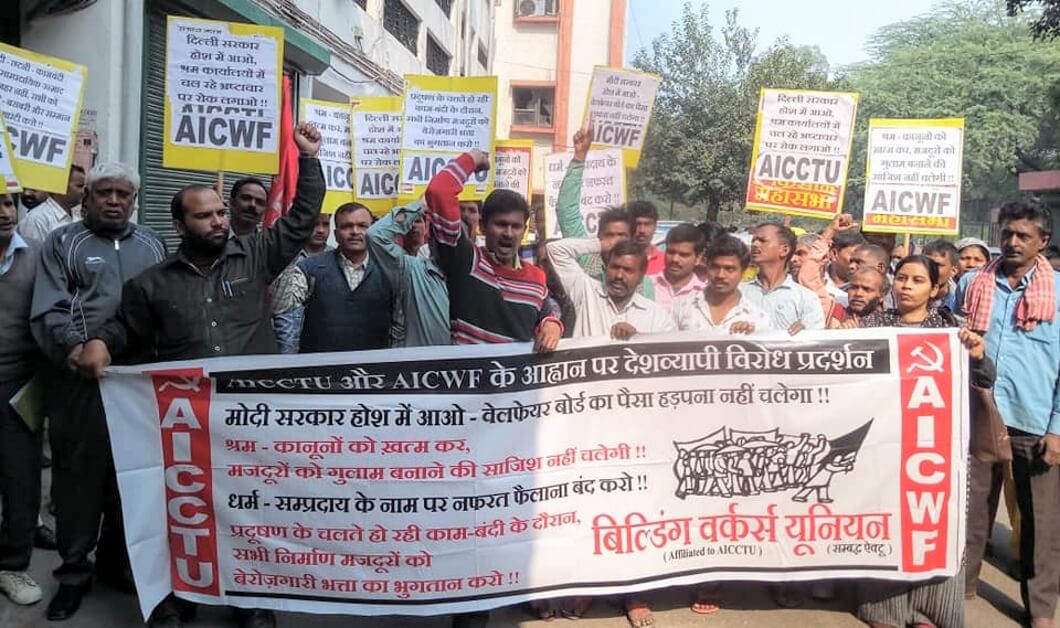 UNIONS affiliated to AICCTU organized protests at various District Labor Offices in Delhi on 20 November 2019. These protests as well as similar protests across the country were in response to the All India Protest Day called by All India Construction Workers Federation (AICWF) against the amending of labor laws by the Modi government, against rampant unemployment and skyrocketing prices, and against the communal venom being spread by the RSS-BJP.

Hundreds of workers participated in the protests at Labor Offices in North, North-West, East, North-East, South and other Districts in Delhi. Addressing the protest in South Delhi, AICCTU Delhi President Santosh Rai said that the Modi government is dividing the poor and the workers so that they fight among each other and their attention is diverted from anti-worker policies like ending workers’ welfare boards and selling of the country’s resources to corporate houses. It is noteworthy that other than the RSS-affiliate BMS, all unions are protesting against the government’s anti-worker policies. 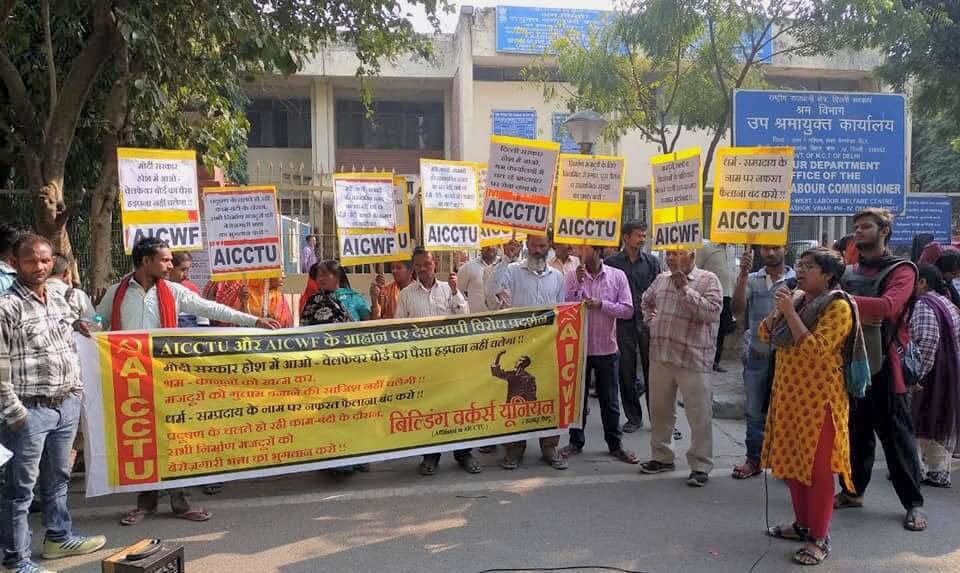 Construction workers at the protests in East and North-East Delhi spoke about the work-place difficulties and injustices, lack of safety measures and equipment, and insensitive treatment in accident cases with no compensation given. The protests here were addressed by AICCTU Delhi Working President VKS Gautam.

Workers participated in large numbers at the protests in North and North-West Delhi. President of the Building Workers Union Rajiv Kumar Pandit who comes originally from Bihar spoke about the loss of livelihood of workers due to pollution-caused work stoppage. Workers at the protests demanded relief from the government and said that they were determined to stay united and carry forward the struggle. 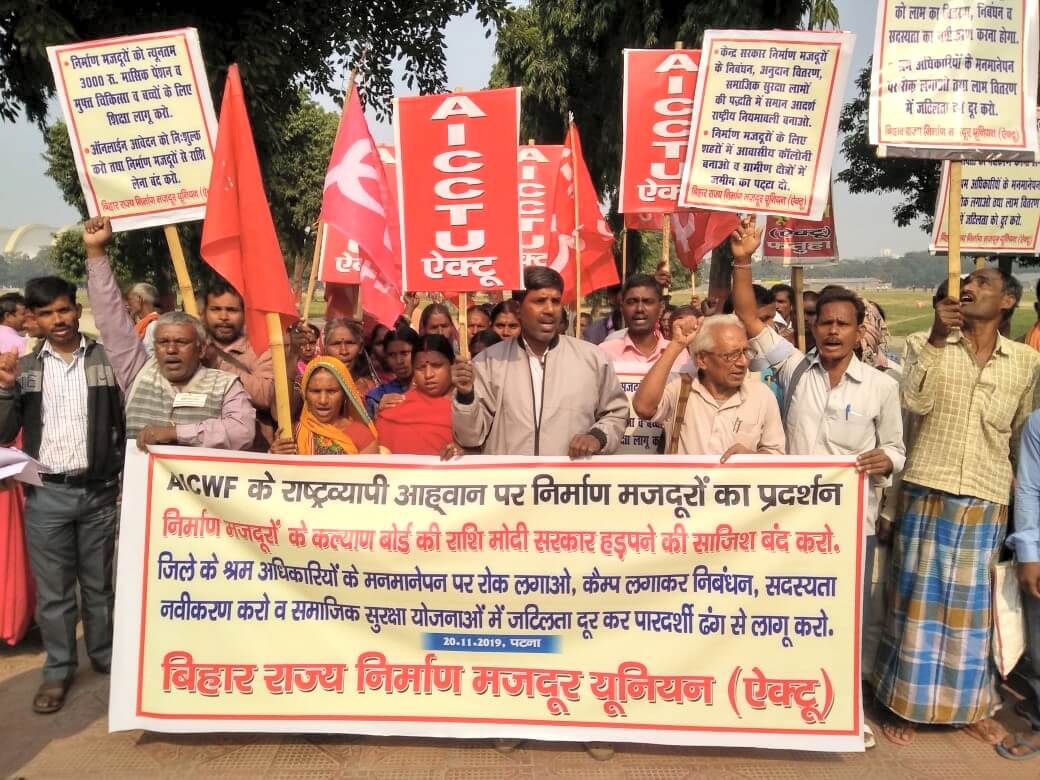 The protests held at many districts in Bihar. Bihar Rajya Nirman Mazdoor Union (BRNMU) Bhagalpur unit organized a dharna in front of the Deputy Labor Commissioner’s office on 20 November, All India Protest Day. Hundreds of women and men construction workers marched in protest against the anti-worker policies of the State government. The dharna was led by AICWF National General Secretary and AICCTU National Vice President SK Sharma and BRNMU State and District Secretary Manoj Mukt.

Addressing the dharna, SK Sharma said that the Modi government is bent on snatching away the long-fought and hard-won rights of workers through the Labor Code Bill which is a new form of slavery the workers will never tolerate. Manoj Mukt pointed out the loot of the Welfare Board social security funds by the Nitish government and said that construction workers from across the State will protest against this in front of the Chief Minister on 28 November. 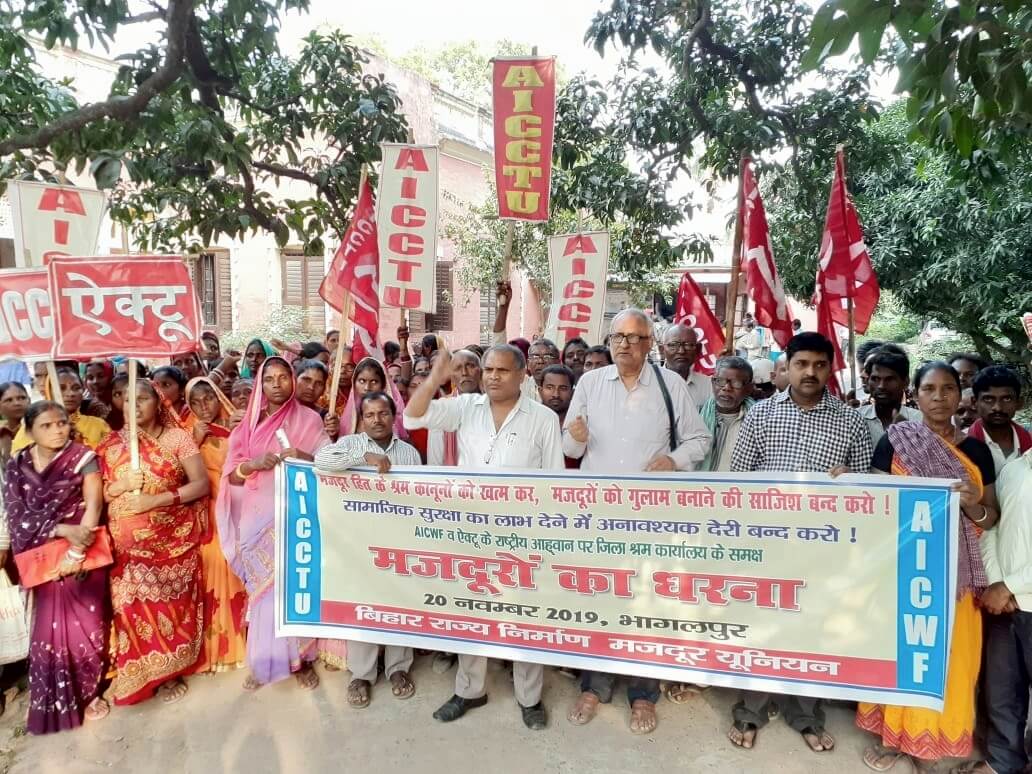 A delegation from the dharna spoke with the Deputy Labor Commissioner and submitted a memorandum with the following demands: revoke the anti-worker amendments to the Labor Law and withdraw the Labor Code Bill; end unnecessary delays in paying social security benefits, make a proper structure for resolving workers’ issues in the labor office and ensure dignified treatment of workers; minimum wages of Rs 1000 per day and health grant of Rs 10,000 per year; free housing and medical treatment for all workers and free education for children; end mandatory membership time period for social security benefits and correct online departmental errors in registration; end mandatory requirement of land papers for house repairs and Skill Development Certificate for tools grant. A delegation handed over their demand charter to the Deputy Labour Commissioner. The delegation comprised of Amar Kumar, Budhni Devi, Ritu Devi, Rajesh Kumar and Ganesh Paswan. 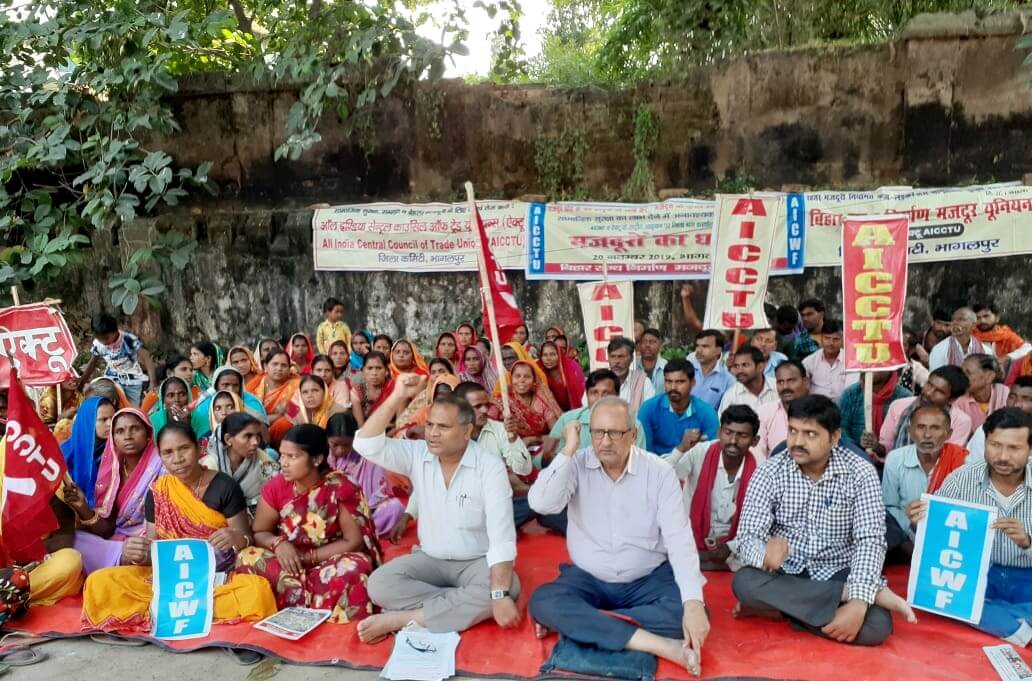 A resolution was unanimously passed at the dharna with the following points: solidarity with the students of JNU who are facing state repression in their fight for the right to education for all; deep condolences to the families of those killed in the Sugauli boiler blast, demand for lifetime ban on the responsible NGO, arrest of the Director and Rs 10 lakh compensation to each of the victims’ families. 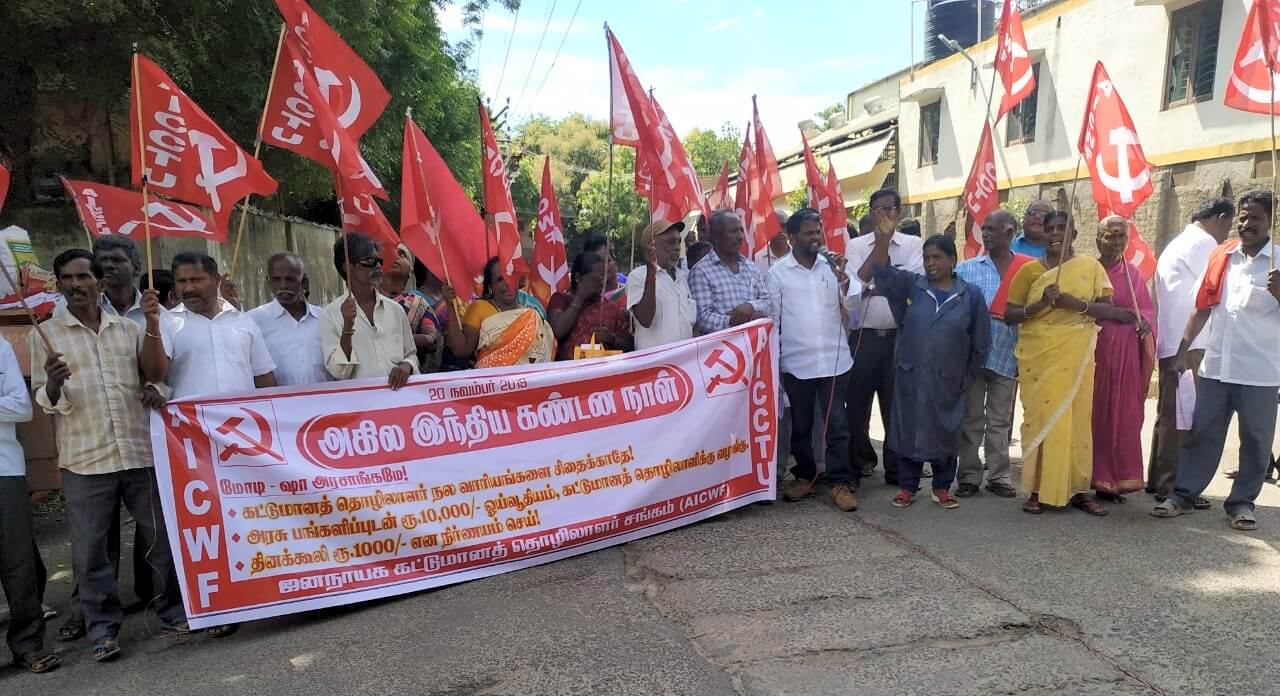