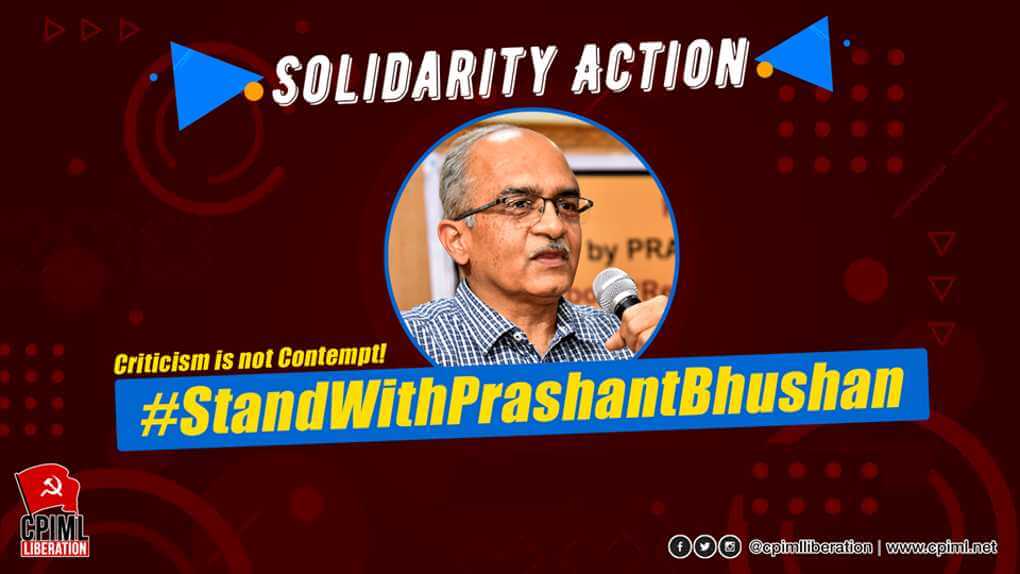 Stand in Solidarity with Prashant Bhushan
Criticism Is Concern Not Contempt

We are deeply disappointed at the judgment of the Supreme Court holding advocate Prashant Bhushan guilty of contempt for two tweets. The judgment has the effect of stifling free speech and fair criticism and seeks to brush aside genuine concerns about the functioning of the Court and the administration of justice.
In recent times, we have witnessed such criticism from several quarters including retired Judges of the Supreme Court, activists, lawyers, and intellectuals, and in our view, such criticism should be valued and heeded by the judicial institution.

We believe that the surest way for the judiciary to gain the respect of people, is not by the use of its powers of contempt, but by being independent, fearless and objective while upholding the human rights and civil liberties of the people. This judgment comes at a time when there is growing intolerance and tendency to criminalise dissent in the country. The Constitution is under attack, democratic institutions are capitulating to majoritarianism and the rule of law is being consistently undermined, by the Modi Government. Dissent, essential in a democracy, is curbed using the draconian UAPA and sedition law, etc. and any counter-majoritarian view is labelled as anti-national.

Many crucial institutions display a worrying tendency to express loyalty to the ruling regime rather that to the Constitution of India. Rather than performing their constitutional duty to apply their minds and make decisions without fear or favour, these institutions are giving the impression of rubber-stamping decisions of the executive. Such a tendency is fatal for any democracy. Any attempt to stifle criticism of institutions: whether it be the legislature, the executive, the judiciary or other bodies of the State, paves the way for a police State instead of a democracy. We stand in solidarity with Prashant Bhushan.