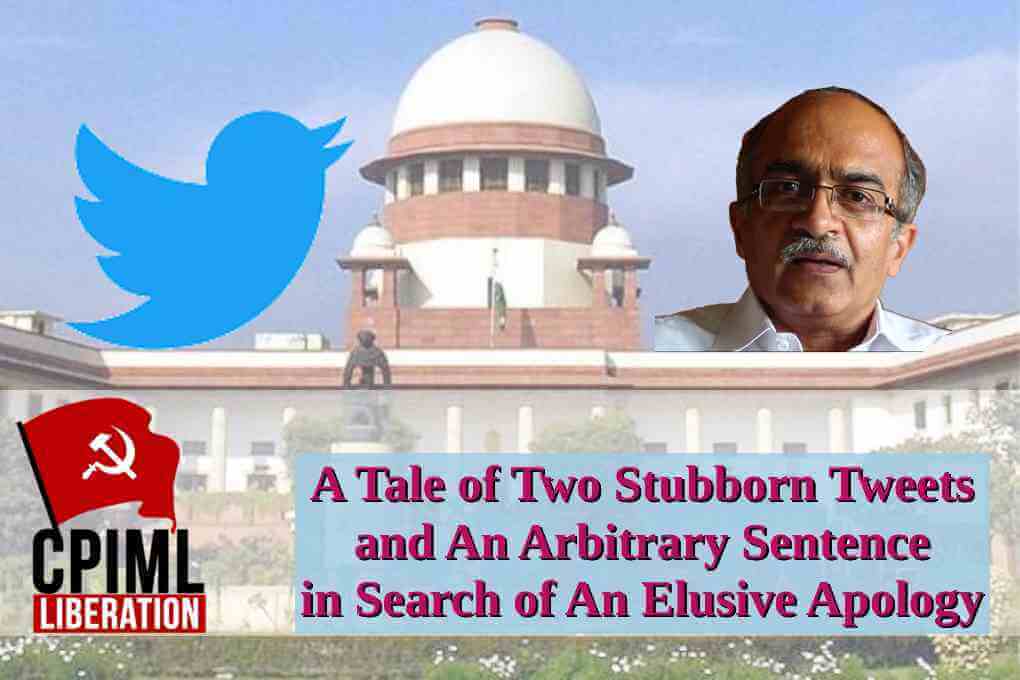 ACT in haste, repent at leisure! The haste with which the Supreme Court had termed two tweets by Prashant Bhushan guilty of contempt of court now reminds us of this famous English aphorism. Even after two hearings the court has now failed to find the suitable punishment for those two guilty tweets! In a case in which the Supreme Court had taken suo motu cognizance, arguably in violation of established legal procedures, and promptly pronounced Prashant Bhushan guilty, it is bizarre to see the court plead for an apology from someone it has already held guilty.

This very predicament of Justice Arun Mishra in announcing a 'suitable sentence' is perhaps a clear reflection of the untenable nature of the 'contempt of court' verdict against Prashant Bhushan. Ironically the same bench on 25 August also heard another 'contempt of court' case against Prashant Bhushan going back to his 2009 Tehelka interview accusing half of former chief justices of the Supreme Court of corruption, and decided to refer the case to an appropriate bench on 10 September by which time Justice Arun Mishra would have already retired.

The contempt of court case against Prashant Bhushan's tale of two tweets turned the spotlight on the state of India's highest judicial institution. As noted by many commentators across the world, the case turned into a trial not so much for Prashant Bhushan as for the Supreme Court itself. By holding Prashant Bhushan guilty of contempt of court and much worse for just two tweets, the Supreme Court showed itself in poor light as an institution which is so touchy as to fear being discredited and destabilised by just two tweets of criticism by an eminent public interest lawyer. And the failed attempt to coerce, coax and cajole the respondent into offering an apology against his conscience has heaped more contempt on the court than any tweets could ever have done.

Indeed, the 'contempt of court' judgement against Prashant Bhushan will go down as one of the most bizarre verdicts ever given by the Supreme Court of India. The judgement was delivered with remarkable speed even as hundreds and thousands of cases are pending to be heard and disposed by the court for years and even decades. The contempt of court is a doctrine inherited from the colonial era which was made into an act in 1971. The arbitrary nature of the law can be gauged by the shocking fact that it needed an amendment in 2006 to 'introduce truth as a valid argument against contempt'.

While the act itself is arbitrary the selective nature of its application makes it even more so. The demolition of the Babri Masjid is one of the most open cases where a government and a party betrayed the commitment they had made to the highest court of India. The case is still going on after twenty eight years even as the same court has awarded the land for construction of a temple and its foundation stone has also been laid. The court has mandated equal pay for equal work and government after government keeps violating it without ever being held guilty of contempt of court. And here are two tweets that have been treated as the greatest affront to the integrity and reputation of the judiciary in India.

Prashant Bhushan's tweets are of course not the first celebrated case of being held guilty of contempt of court. On 6 March 2002 writer Arundhati Roy was indicted of the same 'crime'. On 9 May 2017, the Supreme Court held Calcutta High Court judge Justice CS Karnan guilty of the same offence and sentenced him to the maximum permissible punishment of imprisonment for six months. It is time India scrapped the contempt law along with its colonial era cousins like sedition and defamation laws which are only being issued to incriminate dissent and punish freedom of criticism.

The statement made by Prashant Bhushan, which Justice Arun Mishra thought only 'aggravated his crime', has become a citizen's testament to truth and liberty in these troubled times when the Constitution is under sustained attack and democracy is being sought to be sanitised of dissent. The overwhelming public support for Prashant Bhushan is certainly one of the most reassuring signs for the future of dissent and democracy in India.