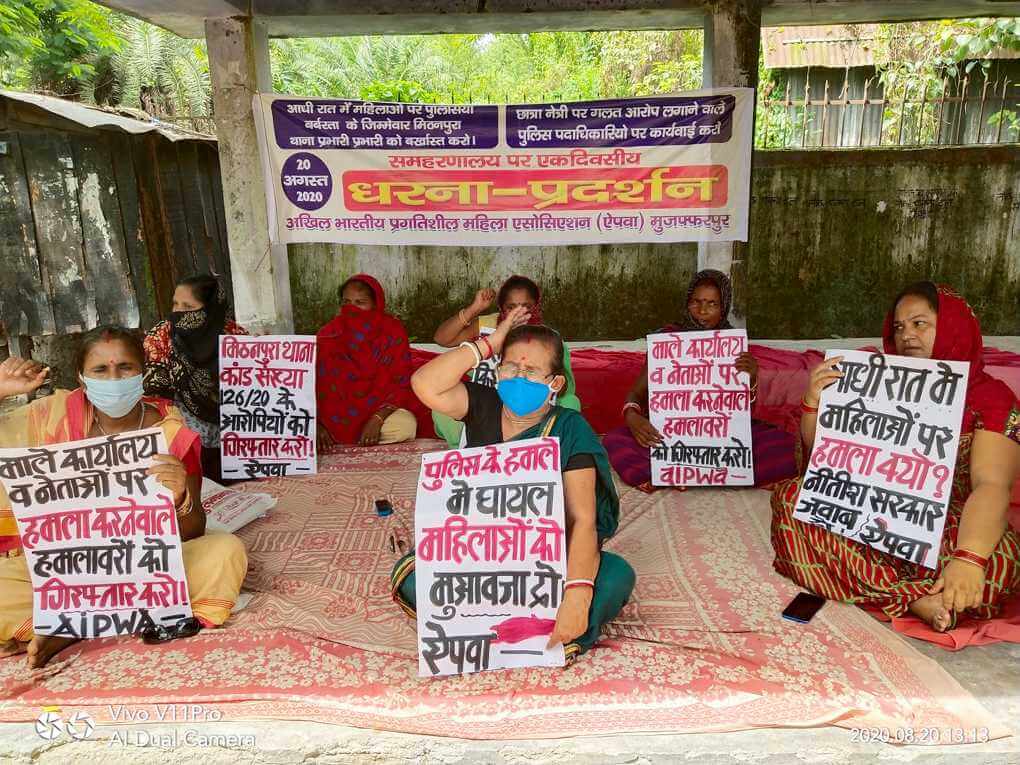 ALL India Progressive Women’s Association (AIPWA) organized a dharna at the office of the District Collector Muzaffarpur against brutal beating of AIPWA activists (women and girls) and misbehavior by the police who entered their homes in Police Line Kanhauli and registering of false cases against girl students. Demanding justice for the women subjected to this police brutality, AIPWA submitted a memorandum to the Collector and the senior Superintendent of Police demanding suspension of Mithanpura Thana in-charge Bhagirath Prasad responsible for the midnight brutalization of the women and strict action to be taken against him. The demands also included proper treatment and compensation for the injured women, withdrawal of the false case registered against girl students associated with AISA, and immediate arrest of the criminals who attacked the AIPWA-AISA-CPIML office. A good number of women were present at the dharna including AIPWA District President Sharda Devi, District Councilor Vijnesh Yadav, Kusumi Devi, Shanti Devi, Shahnaz Khatoon, Israt Khatoon, Rekha Devi and Sunita Devi.

Speaking on the occasion women activists said that the stark truth about the Nitish regime is that dozens of male police forcibly enter homes and brutally beat up and injure and misbehave with women; women students and their relatives are falsely implicated in fake cases; the Mithanpura Thana in-charge makes vulgar comments and indecent allegations in the CPIML office against girl students and women but even after 10 days no action is taken against him. The police maintain a nexus with the criminals who attacked the CPIML office, instead of arresting them. The role of the Thana in-charge remains suspicious. He still continues to make baseless statements and propaganda against girl students and women.

They said that even during this Corona pandemic women are being made victims of police brutality under the Modi-Nitish governments. What kind of women empowerment and ‘Beti Bachao-Beti Padhao’ (Protect and Educate Daughters) campaign is this?

The Nitish government should take serious note of the police brutality against women, the false case registered against girl students their harassment by the police; but this does not seem to be happening and the intimidation and threats by the police are continuing unchecked. Women, students and the common people in Bihar are living in the shadow of fear.