Between Escalating Covid Numbers and Nosediving GDP, the Modi Regime Is an Unmitigated Disaster 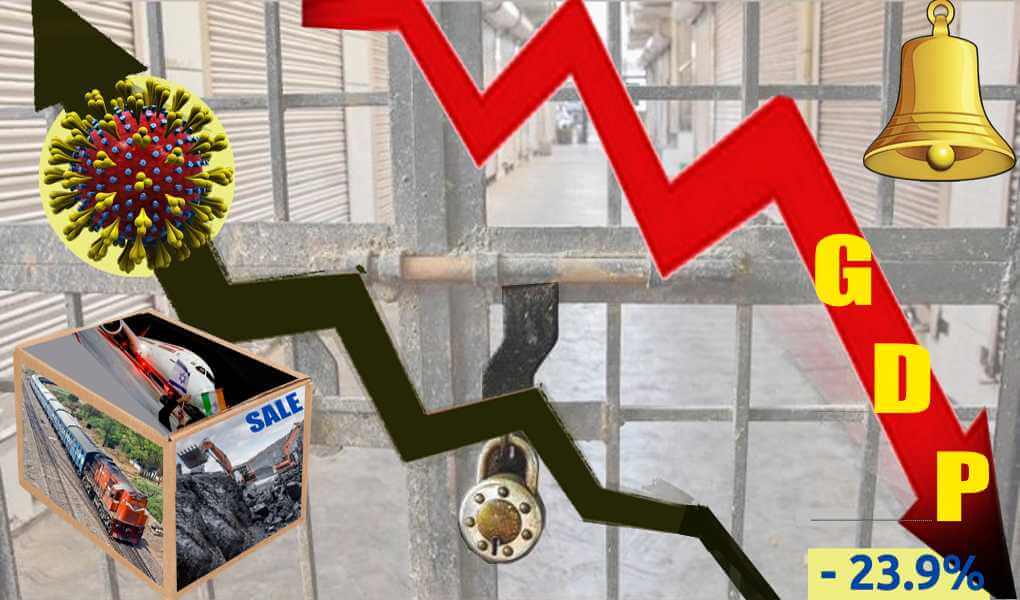 We now have the official economic report card for the first quarter of FY 2020-21. The GDP has crashed by 23.9 per cent, by far the worst global performance for any country comparable to India. Never before in the last four decades did the Indian economy record a negative growth rate. These are early estimates and economists believe the final actual figures may well be much worse. Pranab Sen, India’s former chief statistician, estimates the economy to have shrunk by more than 30 per cent, taking into account the informal sector for which we do not yet have hard data.

The government which had all along been in a denial mode about the economic decline, wants to pass off this shock as an ‘act of God’, as a natural outcome of the economic disruption caused by the lockdown. This is clearly a big lie.  Economic growth in India has been decelerating for quite some time post demonetisation. India's GDP growth rate has been in a free fall for successive eight quarters since 2018-19, from 8.2 per cent to as low as  3.1 in the quarter ending on March 2020, before turning hugely negative following the imposition of lockdown. A sustained slowdown has now pushed the economy into this abyss. Secondly, various countries have adopted some kind of lockdown or the other, but nowhere else has it triggered this kind of an economic disaster. The most drastic and draconian lockdown has produced the most disastrous outcome.

A sectoral breakdown of the GDP crash shows that the fall has not been limited to sectors like construction, transport, aviation, hospitality and tourism that have clearly suffered a massive disruption. Even sectors like mining, that have been largely insulated, or public services, that should have actually seen an increase if the government focused on better delivery of health services and civil supplies, have contributed significantly to the sharp overall fall. The only sector that reported a marginal positive growth has been agriculture. But then the contribution of agriculture to GDP has been steadily declining and a marginal growth of agriculture cannot therefore pull up the overall figures.

Can the economy revive on its own from this state of alarming decline? The government and its official economic administrators perhaps have such a dream. Some of them are predicting a V-shaped recovery, which means the economy will pick up as sharply as it has fallen. But increasingly, more and more observers of global economic trends tell us that the graph of recovery is not likely to look like V, or even U, but rather like K, where some components (or rather coroprate houses) will grow while others continue to go down, thereby further widening the difference or increasing the degree of inequality. But the bottom line for any kind of recovery is urgent state intervention. The disaster has resulted from flawed policies and inaction, recovery needs an urgent course correction, based on effective policies and determined action.

Investment, demand and consumption are the three key parameters that have been driving the Indian economy downward. There has been a massive loss of jobs and income affecting millions of people. A joint study of the International Labour Organisation and Asian Development Bank estimates job loss for 4.1 million youth, in seven key sectors including construction and agriculture, in the wake of the Covid19 pandemic. According to the Centre for Monitoring Indian Economy, as many as 18.9 million salaried jobs have been lost since April. Job losses are accompanied by massive wage cuts, resulting in a huge drop in income and savings, which can only dampen consumption, demand and hence investment.
The only way out can be a massive and urgent increase in expenditure by the central government on an action plan focused on components like cash transfer to compensate for loss of income, universalisation of public distribution system guaranteeing at least 10 kg foodgrain per person per month in every household, increased job days under MGNREGA and introduction of an urban employment guarantee act on similar lines and an extended moratorium and interest/instalment waiver on all small loans. The Modi government has adopted an opposite strategy – it refuses to pay state governments their GST dues, forget about transferring cash to Jan Dhan accounts. Cash-strapped state governments in turn are deferring salary payments and curtailing necessary expenditures, leading to a squeeze on public expenditure, delivery and demand.

The lockdown was announced as a dramatic measure of temporary restriction and sacrifice that will effectively flatten the Covid curve in India. But the prolonged and harsh lockdown has not slowed down the spread of the virus in India, it has only deferred the peak and the incremental numbers are still steeply climbing even after more than six months of the onset of the virus. And now the economy is being unlocked, and students are being forced into examinations and voters into elections, even as the epidemic is ominously escalating with a million cases being added now in less than two weeks.

The government has failed miserably on both fronts – the epidemic and the economy. In the name of economic stimulus the government only unleashed a new rhetoric of ‘Atmanirbhar Bharat’ and the PM has reduced it to asking the people to buy locally made toys, adopt locally bred dogs, and use non-Chinese apps on their phones while the Adanis and Ambanis go on a massive acquisition spree, extending their control over key areas of infrastructure and communication. The gimmicks are celebrated by the dominant media, but the people are now increasingly rejecting this script and the choreography, with students drowning Modi videos on the internet in such mighty waves of dislikes that the BJP could only think of saving themselves by disabling the dislike button! The time has come for young India to turn the social media dislikes into emphatic political resistance and electoral rejection of a regime which only excels in manufacturing disasters and inflicting miseries on the people.