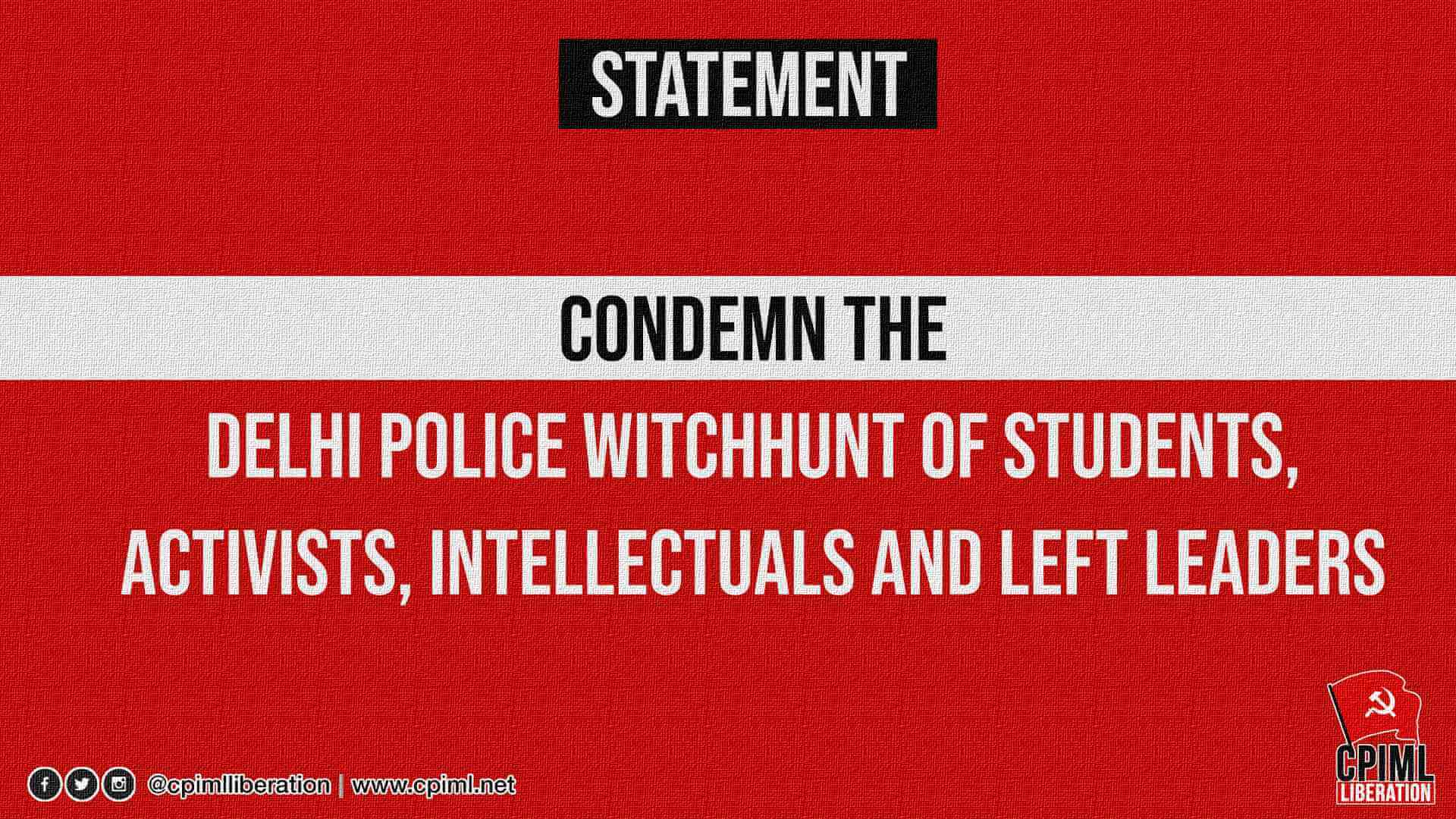 The Delhi Police “investigation” into the violence in North East Delhi in February is becoming more vindictive and farcical with every passing day.

In all its chargesheets till date, the Delhi Police has pointedly refused to act on evidence that Kapil Mishra, Anurag Thakur and other BJP leaders instigated violence against anti CAA protestors and the Muslim community. In the past few months, the Delhi Police has arrested a range of students and alumni of Jamia Millia Islamia and JNU. Its chargesheets have repeatedly named civil society members including filmmaker Rahul Roy and Professor Apoorvanand, student activists like Umar Khalid and AISA leader Kawalpreet Kaur, and student organisations/platforms like AISA, JCC and Pinjra Tod as conspirators responsible for the violence. Supposed “disclosure” statements by arrested persons have named CPIML politburo member Kavita Krishnan, CPIM General Secretary Sitaram Yechury, and Swaraj Abhiyan leader Yogendra Yadav among many other activists.

It was reported yesterday that a supplementary chargesheet filed by the Delhi Police comprises largely of “disclosure” statements attributed to feminist student activists of Pinjra Tod, Natasha Narwal and Devangana Kalita. These so called “disclosure” statements amount to custodial confessions, and are inadmissible as evidence in court. Moreover, both Natasha and Devangana have clearly recorded their refusal to sign the said statements. These “statements” (whose identical clumsy wording suggest that these are scripted by the police) are vehicles for introducing the names of CPIM General Secretary Sitaram Yechury and noted economist Professor Jayati Ghosh.

The Modi regime is using the Delhi Police’s “riots investigation” as a weapon to try and silence dissenting voices against the Government. They hope to silence and terrorise the Left and democratic movement: but their actions will have the opposite effect. An injury to one is an injury to all: we stand firmly and unitedly by every single individual anti CAA voice that the police is seeking to punish. We, and the people of India, recognise the Delhi Police’s actions as a transparent, shameless witch hunt of people defending democracy and peace.

The Government is in the dock: accused by India’s people of making India the worst Covid affected country in the world; of destroying the economy and people’s livelihoods; of attacking the rights of workers and farmers; and of seeking to destroy India’s Constitutional democracy. The same Government is seeking to divert attention from its own crimes, by manufacturing accusations against its critics, and using the police and investigative agencies to arrest and incarcerate innocents under draconian laws.

CPIML stands with all fellow fighters for democracy, against every fabricated case, every false accusation. We shall fight, we shall win!