Memo to Election Commission from Opposition Parties in Bihar 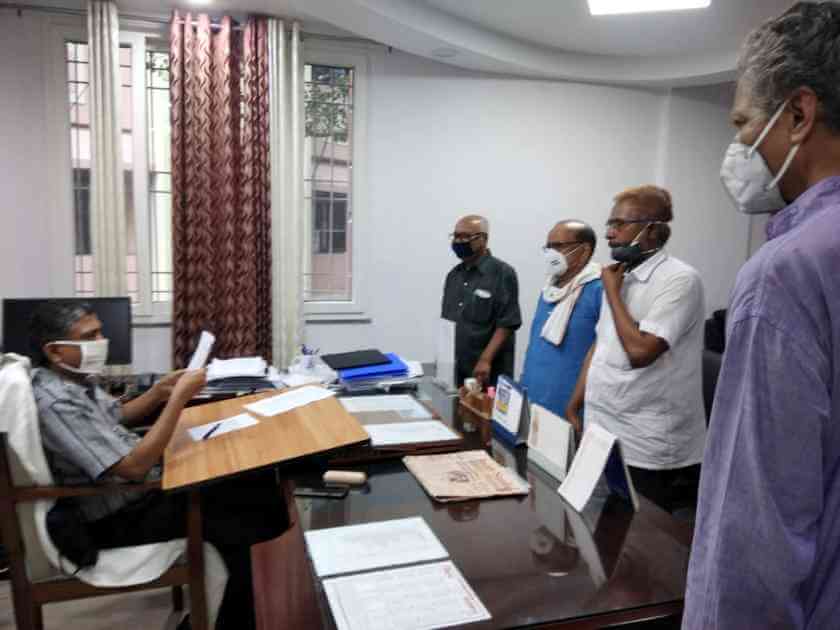 Elections in Bihar should not be reduced to a digitally dominated formal exercise executed with only token participation of the people. Also, elections should not escalate the Covid19 crisis in a state like Bihar, where the situation is currently worsening with every passing day.

Fearless participation of the people and level-playing field for political parties and candidates are two crucial parameters for free and fair elections. The EC will have to assure the people of Bihar about the participatory nature & democratic credibility of the Bihar Elections.

In the memorandum submitted to EC these parties drew attention to the following points in connection with the forthcoming Bihar Assembly election:

“All parties should get equal opportunity: Today democracy in our country, which is considered the world’s biggest democracy and a glorious one, is in danger. The 17th Assembly election is forthcoming in Bihar. At the all-party meeting held recently by the Chief Election Officer, Bihar, the proposals made by the ruling parties for campaigning make it seem as if these parties want to keep other parties out of the campaigning by adopting the hugely expensive corporate method of campaigning through virtual rallies, private and government channels and social media, while putting a ban on true and traditional election meetings. This would be a dangerous step towards ending Indian democracy.

“Virtual methods of campaigning would be based on smartphones and availability of internet. The extent of internet in Bihar (inclusive of smartphones, broadband and cable) is only 37%. Out of this, 80% are people who are financially well-to-do. Only 20% of common people have internet facilities. That is, about 70% of the total population, who will not be able to see and hear their leaders’ and parties’ ideas and views, will generally be voters for opposition parties. If virtual methods of election campaign are adopted, only the ruling parties’ ideas will reach the people unilaterally on money power.

“Indian democracy demands that the campaigns of all parties should reach citizens of all social and economic sections of society equally, so that they will find it convenient for making the right electoral choice. Ensuring this is the responsibility of the Election Commission.

“Therefore, it is the demand of all the opposition parties that the Commission should arrange for campaigning through traditional methods and election meetings during which the administration should ensure that all people use masks or face coverings and maintain proper physical distancing while participating in meetings.

“Curb misuse of money Power: Opposition parties are concerned that prosperous parties, through money power, have already been engaged for three months in virtual campaigning and the cost for this is being borne by these parties. There is no limit fixed by the Commission for such expenses. Therefore it would be a big step towards rendering money power ineffective and reducing election expenditure if the Commission, in addition to fixing a limit for the candidate’s expenses, also fixes a limit to the campaign expenses incurred by parties before as well as after the election code of conduct is put in place.

“Protect transparency and credibility of the election: The Commission has made provision for postal ballot for citizens aged 65 years or more, which will affect the confidentiality of the election and no vigilance over the voting will be possible. The ruling party people can capture these votes through money power, muscle power and ruling power. People above the age of 65 years constitute about 10% of the population. Each Assembly constituency has about 20,000-25,000 such people on an average. To have such a big population voting through postal ballots without monitoring by the Commission will not only affect the entire election extensively, but will also pose a huge question mark on the transparency and credibility of the election. This method will change the fundamental character of voting.

“Therefore, our suggestion is that separate queues should be made at every booth for persons above the age of 65 years and the ir voting should be done on a priority basis while maintaining physical distancing.

“Guarantee extensive people’s participation in the election: The entire Bihar is in the grip of the Corona pandemic. Corona is spreading exponentially every day in villages as well as cities. All sections of society are affected badly, including doctors and health workers, courts, jails, DMs, SPs and police personnel. Lockdown has been re-imposed in many Districts in Bihar. The terror of the Corona pandemic infection is all pervasive. On the other hand, lakhs of families are struggling for life and livelihood.

“In normal times the polling percentage in Bihar is not more than 60-65%. In these times of Corona terror and threat to livelihood, this percentage is bound to decrease even further. Will the election not be reduced to a joke with the participation of only a handful of voters?

“So far the government has fixed a cap of 50 people in any group gathering. The Commission has decided to reduce the number of voters in one booth to a maximum of 1000. But will this also not be a big gathering, and will it not increase the possibility of Corona infection?