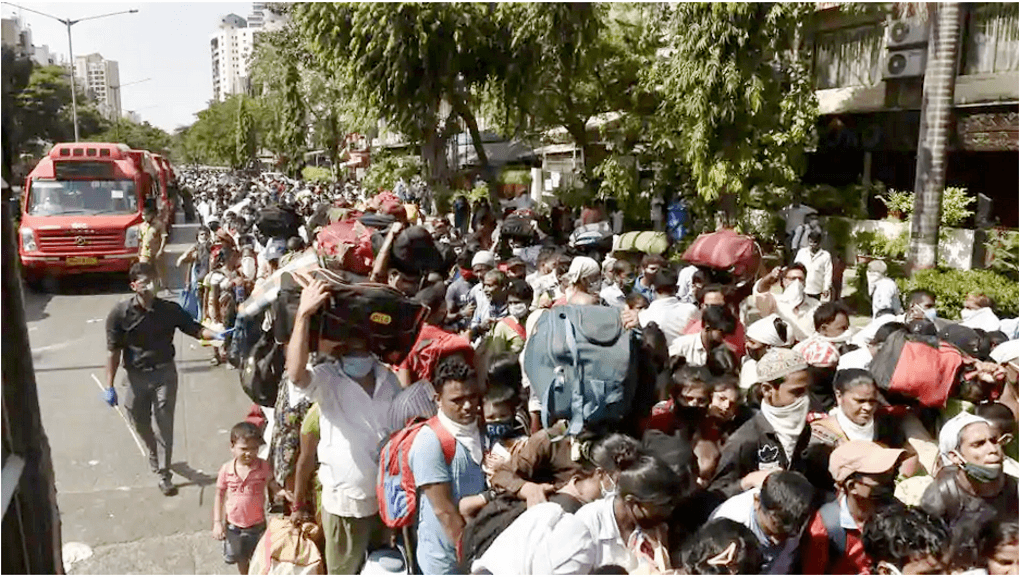 1. Mobility and migration have all along been central to the formation and growth of the working class. From villages to towns, from towns to cities and metropolises -  workers have all along been moving and relocating themselves as workers. There are also patterns and levels of migration that can be classified according to distance and duration: inter-district, inter-state and inter-country migration, seasonal and longer-term migration, and so on. But in spite of the pervasive presence of migrant workers, they have remained largely invisible. We have noticed their presence during moments of major economic disruption (demonetization or economic recession for instance) or social conflict (when migrant workers have faced major parochial violence in their areas of work). But it took Modi’s thoroughly unplanned and punitive lockdown to unlock the suppressed social reality of migrant workers in India. They have now erupted as an explosive phenomenon in the face of the Modi government and all its empty rhetoric of rapid development and good governance. While the process of migration went unnoticed, it was the reverse migration that shook up the whole country. 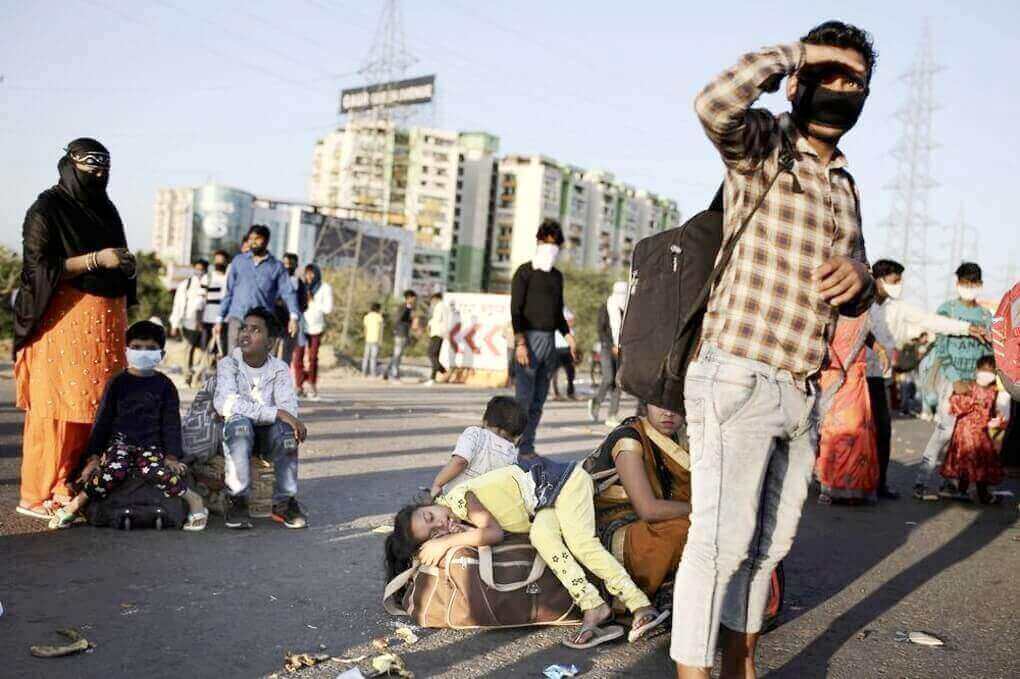 2. The exodus exposed the unplanned and cruel nature of the lockdown like nothing else. The fault lines of the corporate model of development are now out in the open. On a more fundamental level, it has unmasked the true face of the state. It was clear that when the government announced the lockdown and gave us the ‘stay at home, work from home’ mantra, it spared no thought about those large numbers of Indians who had neither home (certainly not of a kind where distancing and other hygienic protocols could be followed) nor work (certainly not of the kind that could be done from home). If this was callous enough, what followed after it became clear that workers were desperate to return was outright cruel and barbaric. It took the government more than a month to decide on running trains to transport workers and now the trains have become a major scam with railway officials themselves acknowledging 80 deaths on Shramik Special trains. Total number of lockdown deaths in India, as recorded till May 30, has crossed seven hundred and migrant workers account for many of these deaths.

3. If the executive fails to discharge its responsibilities, in a democracy one expects the judiciary to play a corrective role. In India, governmental cruelty, callousness and rank incompetence has found its match in judicial apathy and acquiescence. When the first petition on the issue of migrant workers came up before the Supreme Court, the government denied that there were migrants on the roads. The whole issue was rather attributed to fake news and fear-mongering and the apex court accepted the government version. When the question of payment of lockdown period wages came up, the Chief Justice wondered why the workers needed wages when they were getting free food. Eventually after two months the Supreme Court claimed to take suo moto cognizance and asked the government to arrange free transport for migrant workers when hundreds of thousands of them have already reached home braving so many obstacles and so much insecurity and repression, pain and humiliation, and in so many cases, paying a heavy price with their own lives. The dominant media paid little attention to the whole crisis, but the few journalists who did have been dubbed ‘vultures’ by the government before the apex court.

4. Migrant workers wanted to return home, but in many cases they now find themselves in quarantine centres which are so utterly mismanaged and underequipped that they can only be called detention camps or torture chambers by another name. Migrant workers cramped in overcrowded tenements in Covid-stricken cities like Mumbai, Ahmedabad, Surat, Delhi NCR or Bengaluru have always been among the most vulnerable social groups in India in the face of the Covid19 epidemic, and instead of ensuring their return before the lockdown or during the early stages, they have been forced to return at a time when the epidemic is clearly spreading quite rapidly. This has exposed the migrant workers and their families not only to greater risk of the epidemic but also to social distrust and divisions and increased emotional stress in their own villages and neighbourhoods.

5. The disruption caused by the combined impact of the epidemic and the coercive and unplanned lockdown is not going to be something temporary and limited. By all indications, the exit from the lockdown is going to be protracted and messy. The economy was already in a slowdown mode before the lockdown, now even the government admits to a massive decline. It is an absolute contraction of the economy. The situation is going to get worse because of the economic direction being pursued by the Modi government. Instead of moving towards increased state intervention, public expenditure and large-scale cash and food transfer to the needy to boost public demand and hence the economy, the government has chosen to treat this crisis as an opportunity to further liberalise the economy and appease capital by dismantling and suspending labour laws and diluting relevant environmental and factory regulations. All this is being fraudulently packaged as “Aatmanirbhar Bharat Abhiyan”, a campaign for India’s self-reliance. Genuine self-reliance would mean developing India's domestic market and mass consumption, but what the government is planning is the oppsite - suppressing wages and consumption in order to sell globally on the basis of cheap labour. 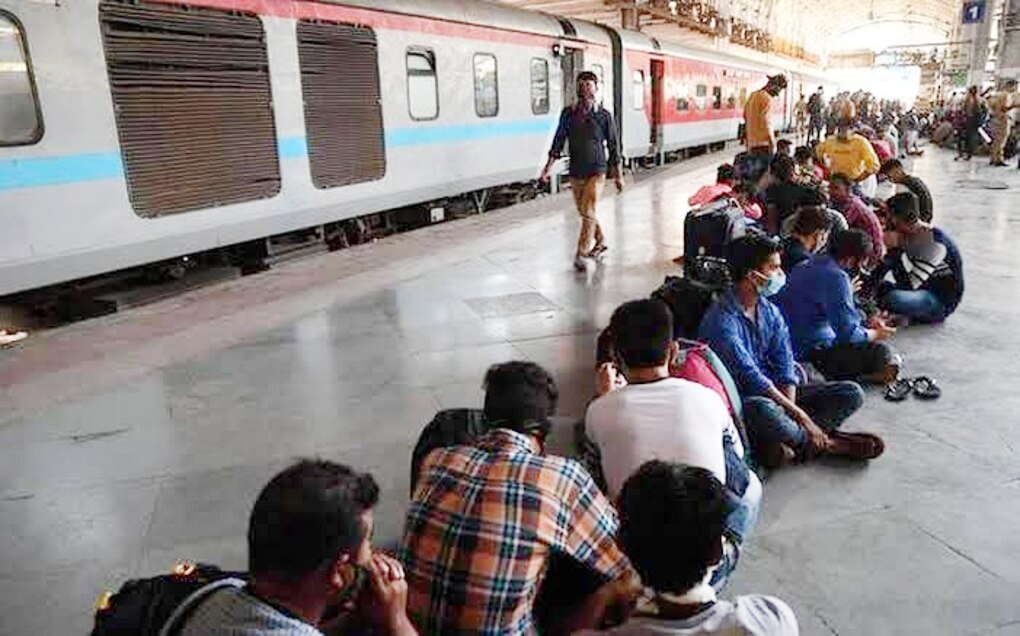 6. This macroeconomic scenario poses a big question mark for the future of the migrant workers. It is difficult to say how many of them will be able to return to their places of work and pick up the thread of life from where they had left it before the lockdown. Can we think of their possible economic reintegration/reaccommodation in their areas and states of origin? The lack of job opportunities and basic wages in their own areas/states that prompted them to migrate to other states and cities in search of a better living is still very much there. That can change only with local economic changes – revival and reopening of sick and closed industries, and formation of a new chain of agro-based and other labour-intensive small and medium units, thereby generating better employment and income prospects. Speaking in the short-term, this must be complemented by an improved and more effective NREGA framework (with increased duration and scope for work and better wages), launching of employment guarantee act for the urban unemployed, massive expansion in public works (with building of government hospitals and schools and colleges as the main priority), provision of unemployment benefits/allowance and more effective entrepreneurial assistance for self-help groups and start-ups. 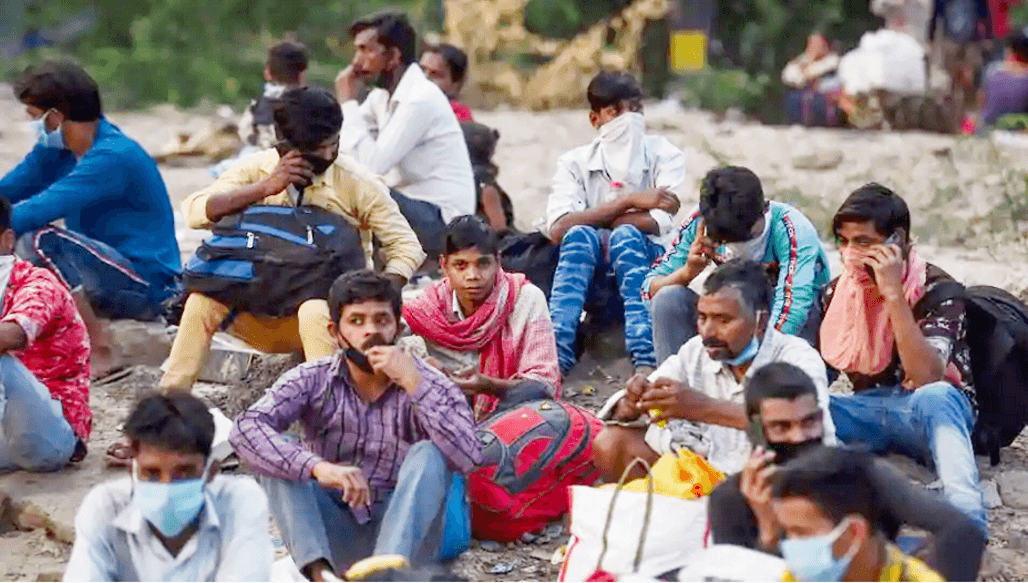 7. The return of the migrant worker is also full of new potentials and challenges for the working class movement and the agenda of progressive social transformation. Generally speaking, the migrant workers can be treated as the vanguard sections of rural society. Many of them played a leading role in struggles against feudal oppression and for social justice before migrating to cities in search of livelihood. Many are young educated people who have moved out of the villages as the rural economy could not guarantee them gainful employment. While in the cities they have been exposed to the trappings of urban life and new technology, they have often not found their social bearings and the vibrant environment of progressive politics that they had in the villages. The insecurity of their fledgling/precarious urban existence and pressures of work often compel them to stay away from any class organization or class politics. The sweeping economic and political changes of the last few years – marked by relentless assault of neoliberal policies, spread of rightwing ideas, aggressive rise of the communal fascist forces and the changing character of the dominant media and the social media space dominated by fake and twisted news and communal hyper-nationalist propaganda – have profoundly coloured their political choice and the migrant workers became a powerful vehicle of the Modi victories in 2014 and 2019. This time round these workers are coming back as a deeply disillusioned lot – abandoned by the state, looted by the economy and humiliated by the dominant society. It is both a huge potential and challenge to channelise this disillusionment into new political energy and consciousness.

8. The migrant workers have never really figured prominently as a key category of workers even for the Left trade union movement. In times of acute insecurity, Left trade unions and parties, have of course intervened in favour of class unity and in defence of the basic interests and survival of migrant workers, but that has not meant much in terms of a sustained improvement in their living and working conditions and bargaining power. The issues of housing, health and education of migrant workers’ families and various rights of migrant workers as citizens (like possession of ration card and voter card) have often remain unaddressed and unachieved. Now that the phenomenon of migrant workers has belatedly claimed the attention of the country, we must make sure that this recognition does not dissipate with some empty gestures of sympathy, rather translates into tangible rights and improvements/gains for migrant workers. The injustice and insult experienced by the migrant workers must neither be glorified as ‘sacrifice for the nation’ or trivialized as a passing inconvenience, it must be recognized as a crime committed by the state to a key contingent of India’s working class and must be corrected by securing justice for the migrant workers.