‘One Rupee’ Fine for ‘Contempt of Court’: 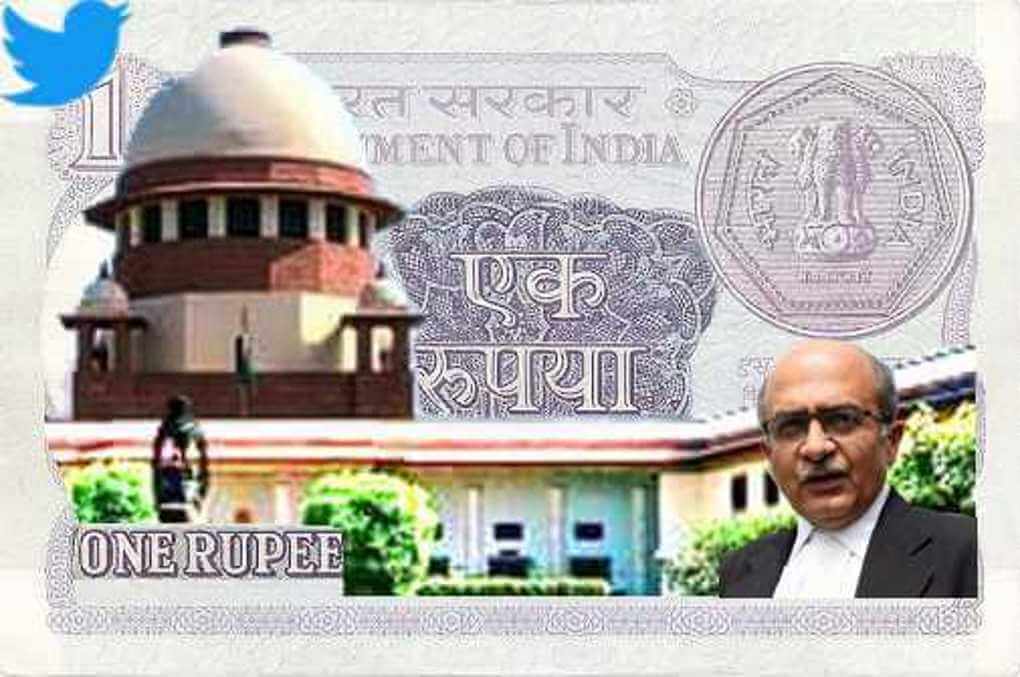 ‘One Rupee’ Fine for ‘Contempt of Court’: Signals from the Prashant Bhushan Case

After delivering a more than 100-page verdict holding Prashant Bhushan guilty of contempt of court for two tweets, Justice Arun Mishra and his colleagues finally issued another long judgement to pronounce the quantum of sentence. Prashant Bhushan was asked to pay a fine of one rupee by 15 September or serve a prison sentence of three months along with an embargo of three years on his legal practice. Understandably enough, Prashant Bhushan decided to pay the fine as he had already declared that while not offering any apology for his tweets, he would cheerfully submit himself to any punishment decided lawfully by the apex court.

Both verdicts announced by Justice Arun Mishra in this contempt of court case, the August 14 judgement holding Prashant Bhushan guilty for his tweets and the August 31 sentence after the court failed to coerce Bhushan into offering an apology, will go down in India’s judicial history in any list of extremely arbitrary and peculiar verdicts. Finding two tweets guilty of discrediting and destabilizing the judiciary and then fixing a token fine of one rupee as punishment for such an allegedly grave offence can only be seen as a sign of extreme judicial inconsistency. The court only gave the impression that in this case it had painted itself into a corner.

But we cannot afford to treat the whole thing as an aberration that can be forgotten after this ludicrous sentence. The court clearly wanted to set an example and send out a message. It was a message for Twitter to ‘behave’, to restrain and regiment the platform and not be hospitable to dissent. And it worked! Even before the Supreme Court gave its verdict, Twitter went out of its way to suspend the tweets in question. The message was also intended for Prashant Bhushan and the public at large and even though Bhushan refused to buckle under pressure the Supreme Court has taken this opportunity to create an example to intimidate and silence other critical voices.

The whole episode has two important lessons for the ongoing popular quest for justice and democracy in the face of the intensifying fascist offensive. The outpouring of mass support and solidarity for Prashant Bhushan clearly indicated that large sections of Indian people were alive to the growing threat to democracy and determined to defend it with all their strength. By staying firm and refusing to submit to coercion and give an apology, Prashant Bhushan has powerfully articulated this popular resolve. This courage of conviction and tenacity to fight are key qualities to wage and win any protracted battle. And we need these qualities whether we have to spend months and years in jail like the Bhima Koregaon 12 and many others are doing or whether we succeed in getting mild sentences like the one-day incarceration for Arundhati Roy or one rupee fine for Prashant Bhushan.

The other lesson is the importance of the battle for legal reforms and judicial accountability. Colonial-era repressive doctrines and draconian legislation like the Contempt of Court Act, or sedition or defamation laws, or laws like NSA, UAPA or AFSPA, that are routinely used to curb freedom of speech and expression, incriminate dissent and provide impunity for extra-judicial repression and violence, can have no place in the constitutional democracy of independent India. The International Commission of Jurists has also urged review of India’s criminal contempt laws after this latest episode. The urgency of judicial accountability becomes obvious when we look at the routine violation of the rule of law by the powerful and the privileged and the systematic persecution and disempowerment of common citizens, especially the poor and ideological dissenters, by the state.

August is the month of resistance and freedom in our history. As the fascist regime seeks to rewrite our history and celebrate and showcase their ‘victories and achievements’ won through wholesale subversion of the Constitution and suppression of the people, it is important for us to intensify our resistance and celebrate and consolidate our victories. Whether it is a prominent international publishing concern like Bloomsbury being shamed into disowning the publication of the sinister Sanghi narrative on the Delhi communal violence or the Supreme Court climbdown in the contempt of court case or the Allahabad High Court ordering the release of Dr. Kafeel Khan and revocation of the illegal NSA charges imposed on him, the people’s movement for justice and democracy must draw on every moral vindication and victory to sustain and strengthen itself.

And this moral victory must make us doubly aware of the increasingly vindictive and inherently casteist nature of the Indian state. While Prashant Bhushan is let off with a one-rupee fine, let us remember that young Suvarna Salve, a Dalit student and cultural activist in Mumbai, has been asked to furnish surety of Rs 50 lakh to get bail for participating in a peaceful Mumbai solidarity protest against the ABVP attack on JNU students in January 2020. The fight for freedom of speech and expression must challenge the majoritarian and Manuvadi bias of the state which makes a Kafeel Khan or a Suvarna Salve more vulnerable when they exercise their freedom of expression.