Workers and Farmers Protest across Country on 9 August 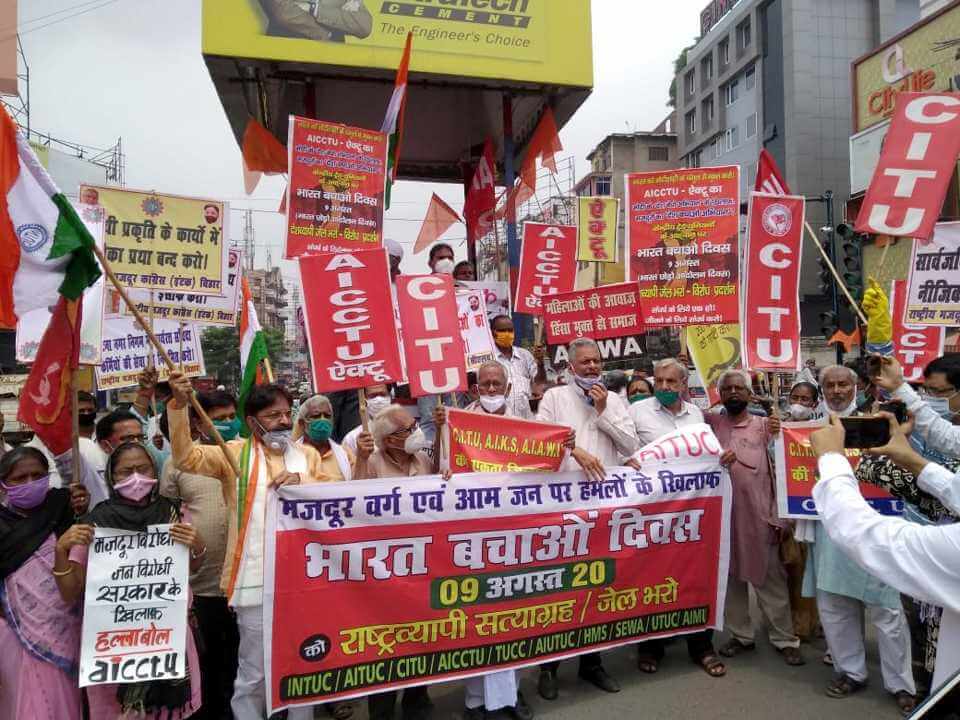 The Central Trade Unions along with Sectoral Federations and Associations and farmers’ organisations observed 9th August as “SAVE INDIA DAY” against anti-worker, anti-farmer, anti-people and anti-national policies of the BJP Government organising nationwide action programmes of Satyagrah, jail bharo, processions, public rallies which received a huge response throughout the country. Workers and farmers protested at work places, union offices, on roads and streets and held processions, cycle and motorbike rallies and public meetings.

Workers from various areas and sectors participated in the protests. For the past few months workers and farmers have been consistently coming out on the streets to protest, and these protests will not abate. Workers from Delhi Transport Corporation, Central and State government health institutes, Jal Board, scheme workers, construction workers and unorganized sector workers also joined at Jantar Mantar under the banner of AICCTU. 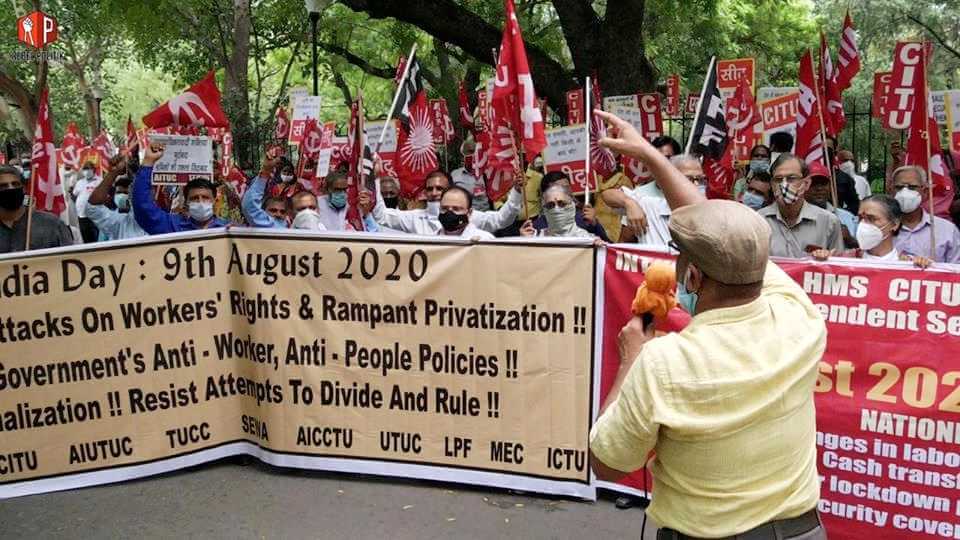 AICCTU National General Secretary Rajiv Dimri said that the agitation against the Modi government would be intensified in the days to come. The process of abrogating four important labor laws and implementing the 4-labor code is being rapidly activated. Work hours have been raised from 8 to 12 even as we were in the midst of the Corona crisis. The work conditions of workers are appalling across the country from Vishakhapatnam to Delhi. Many workers have lost their lives and many injured in recent industrial accidents, and yet the safety of workers is being jeopardized through abrogation of the Factory Ordinance, Industrial Disputes Ordinance, Trade Union Ordinance and other important labor laws. The Modi government has not only thrust aside suggestions made by trade union organizations but actually acted completely contrary to these suggestions. He pointed pointed out that the Modi government, RSS, BJP and Sangh Parivar are ceaselessly trying to divide the working class on religious and community lines and vitiating the harmonious atmosphere by spreading hatred and violence. Under cover of this, they are snatching away the rights of workers and famers. The Modi government is moving towards auctioning off important national assets like Indian Railways, BPCL, ONGC and BHEL. The government wants to hand over to capitalists the institutes and workers through whom our country has today become self-reliant in many ways.

The Corona crisis has shown everyone the greed and profiteering of private hospitals; if the railways and other public sector units are privatized, it will be the biggest tragedy for the poor and the working class. There is considerable anger among railway workers; coal workers have called for a strike; arms manufacturers have also announced a strike; scheme workers are agitating across the country. The working class of India will not allow the Modi government to sell this country. The government is preparing to mortgage the country in the name of ‘self-reliance’. We must rise above religion, caste and community to intensify our struggle against this evil intent.

The CTUs have said that the Government not only failed in taking necessary steps to contain the pandemic in time having wasted four precious months, imposed unplanned lockdown with short notice bringing in severe miseries to the people specially the migrant labour, failed in taking essential steps for upgrading health system and providing the safety equipments to front line warriors, it not only failed to recognise the immense services provided by employees of Railways, Defence, Banks, Insurance, Telecom, Postal and other sector providing essential services during lockdown period, but did not address the problems they faced, it faltered in dealing  with the problem of COVID-19 as law & order issue instead of treating it as medical emergency for the human beings and society. It has caused immense miseries to millions of workers, farmers and other vulnerable sections of the society, whereas, Government stood only by the Corporates & big businesses. The CTUs opposed disinvestment and wholesale privatisation of Public Sector Enterprises, entry of FDI in core sectors up to the tune of 100 percent including Indian railways, Defence, Port and Dock, Coal, Air India, Banks, Insurance telecom, power, postal including of Privatisation of Space Science & Atomic Energy etc., Public sector banks, insurance, and other financial sectors are also being targeted for large-scale privatisation. Steps in favour of Corporates of Indian & Foreign brands to usurp natural resources and business of the country while mouthing the slogan of Aatma-Nirbhar Bharat are being pushed through shamelessly. The freeze on Dearness Allowance of more than 10 million employees’ pensioners was also condemned. The demand of cash transfers of Rs.7500 as pandemic allowance to all non-income tax paying persons was ignored by the government. The government even shamelessly betrayed its own order of payment of lockdown period wages, no retrenchments and no cut in wages and took an about-turn in the Supreme Court to appease Employers’ lobby against these orders. The continuous price-rise of essential commodities was also strongly opposed by the protesters. 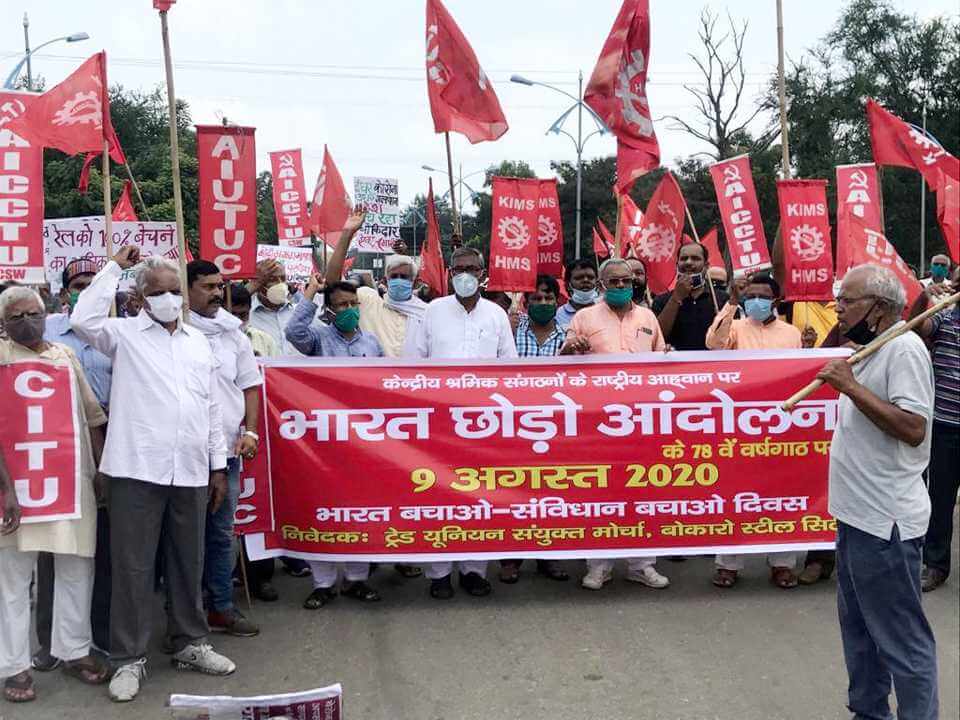