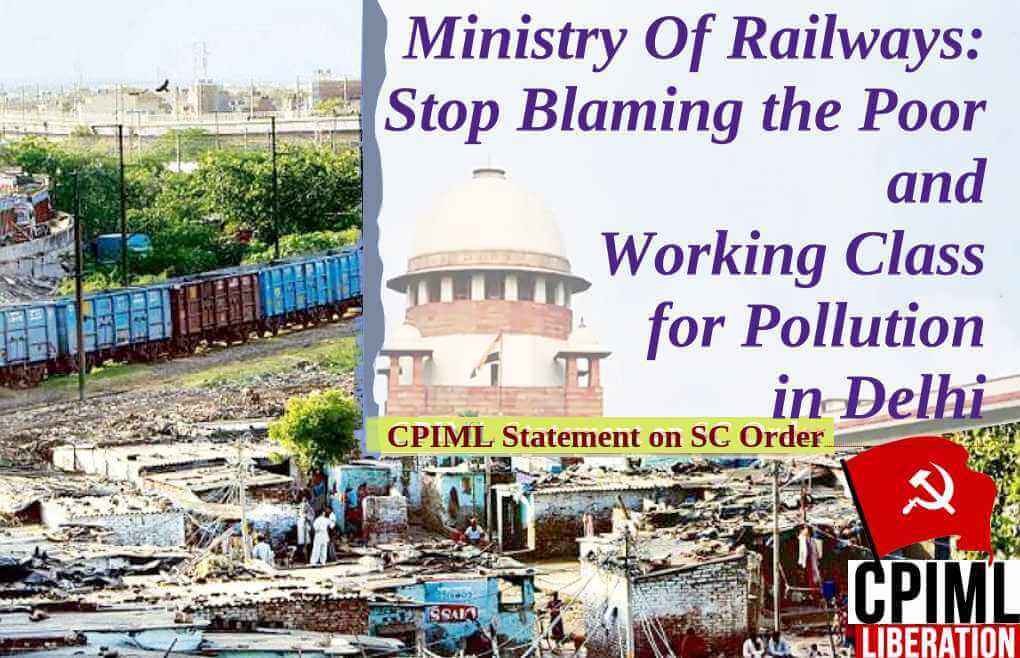 Stop Evictions: Ensure Right to Decent Housing For All
Ministry Of Railways: Stop Blaming the Poor and Working Class for Pollution in Delhi

In a shocking and inhuman decision a Supreme Court Bench headed by Justice Arun Mishra (the same Bench that held Prashant Bhushan guilty of contempt of court) has ordered the demolition of all slums along railway tracks in Delhi within three months. The order passed on 31st August has even more shockingly directed that no other court should ‘grant any stay with respect to removal of the encroachments’. CPI-ML believes that the order passed by the bench of now retired Justice Mishra is a flagrant violation of Right to Life guaranteed under Article 21 in the Indian Constitution.

It is even more shocking that this order has been passed in the course of hearing of a case on pollution in the National Capital Region and had nothing to do slums! That the bench passed this order without even taking into consideration that the Right to Shelter has been accepted by the SC as a Fundamental Right is yet another instance of how recent judgments of the Supreme Court have failed to protect fundamental rights of citizens. In various judgments the Supreme Court has held that the Right to Shelter is protected by the right to residence under Article 19(1)(e) and the right to life guaranteed under Article 21, but the order passed by bench of Justice Mishra has completely ignored these precedents. Further it is a grave violation of the principles of natural justice that the Supreme Court has barred any other court in the country to even pass an interim order in the matter. While passing this order while hearing a case on pollution the Bench seems to be making the absurd claim that the poor and working class who live near railway tracks are responsible for the pollution of the city! It is clear that the Bench has gone way beyond its remit and has passed an order on an issue which has no connection with the case it was hearing.

The order was passed on the basis on the Ministry of Railways claiming that it is not able to clean the areas around tracks because of the slums, it also failed to bring up previous judgments before the court which have clearly state that there can be no dislocation without proper resettlement. The Rail Ministry has played the role of agent provocateur in getting this order passed and has to be held accountable.