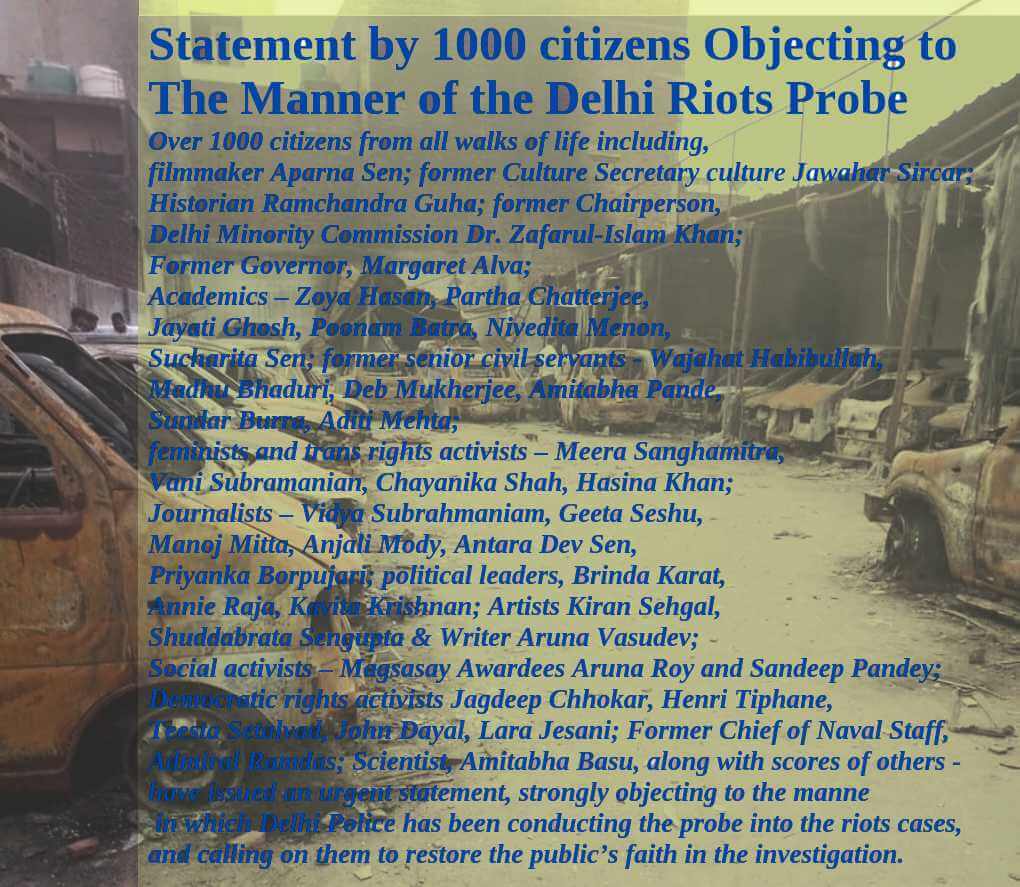 Citing strong evidence of coerced ‘confessional’ statements and manufactured evidence, the signatories have sought assurances from the Delhi Police Commissionerate that these practices will be stopped, and have urged them to conduct a fair and impartial investigation to book the real culprits of the riots.

We are alarmed by the news that on Sept 1, 2020, Umar Khalid sent a letter to the Delhi Police Commissioner, Shri SN Shrivastava, with shocking evidence of the Delhi Police manufacturing evidence against him, through extorted statements. The letter reveals that a young man was interrogated by the Delhi Police (Special Cell) and a false confession against Umar Khalid, related to Delhi riots, was extracted and videotaped. The young man was threatened that he would be arrested under UAPA if he refused. He submitted to the coercion for he was scared, and yet his conscience allowed him to speak up about what had transpired. (https://thewire.in/rights/).

We are gravely concerned that Dr. Umar Khalid, a young scholar, already vilified and targeted relentlessly by a section of the media, is now being implicated in riots cases on the basis of manufactured evidence. Umar Khalid is not above the law, and must support any police investigation. But when the process of law is sought to be short circuited and undermined, then any citizen’s liberty is gravely threatened.

Other people have earlier reported being coerced during police interrogation in Delhi riots cases (https://www.thepolisproject.)

This pattern of coerced statements and false evidence is alarming. We ask the Delhi Police to confront this evidence of fabrication and coercion, uphold the sanctity of law and procedures, and conduct a fair and just investigation. So that the real culprits of the terrible violence that caused 53 deaths, injured hundreds and damaged property of thousands, are arrested.

We, as citizens of this country, bring on record our objections to the manner in which the North East Delhi Riot cases are being investigated, what this means for the rule of law, the protection of the civil liberties and booking of the real culprits.

It is important that the faith of the public be restored in the police. The investigation of the North East Delhi riots has undermined this faith as it is being undertaken in a prejudicial manner, targeting the anti-CAA protestors and supporters, alleging a conspiracy.

We seek an urgent assurance from the Delhi Police Commissionerate, that practices like extorting ‘confessions’ to manufacture evidence will be immediately ended; that those who indulge in them will be held accountable; and that no action will be taken against Umar Khalid or anyone else on the basis of these so called confessions and fabricated evidence.

Even these coerced confessional statements do not make for UAPA offences, and invoking this law appears to be done without application of mind, to give acts the colour of a conspiracy against the state. We ask the police to drop the application of UAPA in all these cases.