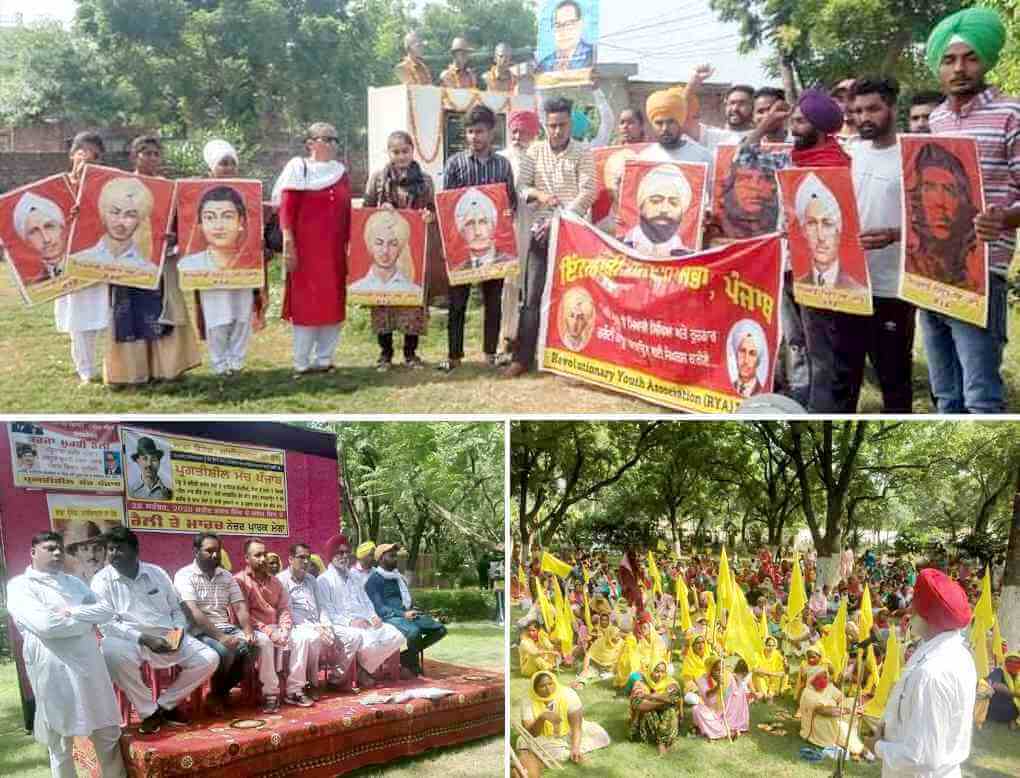 Shaheed-e-Azam Bhagat Singh was remembered on his 113th Birth Anniversary on 28 September across the country. All CPIML units held various programmes on this occasion to reiterate the pledge to strengthen the fight against the fascist regime and fulfil the dream of the martyrs of freedom movement.

AICCTU and RYA observed the day as ‘Protect Rights of Workers and Farmers and Right to Employment Day’, raising slogans for saving democracy and building the India of Bhagat Singh’s dreams, workers’ and farmers’ rights, right to employment, end to privatization and annihilation of fascist corporate Company Raj.

Addressing the meeting on the occasion leaders said that Bhagat Singh’s vision was not to replace white British Raj with brown British Raj; he wanted to build an economically and politically egalitarian India free from caste, religious and racial discrimination. Bhagat Singh’s dream was of India as a modern democracy where each and every one would be guaranteed the right to life and livelihood. Today under the Modi regime crores of youth are unemployed and the government is justifying job losses. After 73 years of independence once again the freedom and democracy of our country is in danger and farmers and workers are forcibly being made slaves of corporate companies. Chaos, hatred, communalism, racism and a venomous environment are rampant and the country is being pushed into fascism. The speakers pledged to save the country from fascism, Company Raj and privatization policies and called upon the people to unite and fight against these evils.

A dialogue on students and youth for right to education and employment was organized at the CPIML Paliganj office on the occasion of Bhagat Singh Jayanti. CPIML Paliganj Assembly election candidate Sandeep Saurabh was the main speaker on the occasion. He said that the relevance of Bhagat Singh becomes even greater today when basic rights of the youth like education and employment are being destroyed, farmers are being pushed into corporate slavery through the anti-farmer farm Bills, and workers’ rights are being abrogated by ending labor laws. The current dispensation is extremely insensitive towards students and youth. Nitish Kumar says the Bihar has a double-engine government, but in truth it is a double bull-dozer government operated at the Centre by Modi and in Bihar by Nitish Kumar to crush the right to education and employment. The government education system is being weakened. There is a great paucity of teachers in schools and colleges. Today 2, 75, 525 teachers’ posts in Bihar are lying vacant. The youth are being pushed out from the right to employment. Under the excuse of Lockdown the Modi government has sold off national assets including the biggest employment generator Railways, public sector units and airports, while on the other hand they have left lakhs of migrant workers from Bihar to die.

Venomous hatred is being spread across the country as part of a well-planned conspiracy. India is the country with the largest number of young people but the unemployment rate today is the highest since independence. It was Bhagat Singh’s dream to build an India where everyone would have the right to education, employment and a life with dignity. We pledge today on Bhagat Singh’s 113th birth anniversary to fulfill his dreams and struggle relentlessly to build the egalitarian society he visualized.
In Chhattisgarh, CPI and CPIML observed the day as ‘Save Employment, Save Rights, Save Democracy’ day. Tributes were paid to Bhagat Singh and all other martyrs. Speakers addressing the occasion said that the working class is today undergoing the worst and most difficult times but instead of providing relief to the workers the Modi government has behaved like the colonial British Raj and brought the Labor Code Bill which snatches away even the few rights that still remain for the workers. RSS-BJP and its organizations want to spread the poison of communal hate and prevent farmers and workers from uniting. But we will take the challenges head on and pledge to defeat the evil intentions of this fascist government.

The speakers said that the people would teach a lesson to this government which is pushing workers and farmers into slavery of corporate and multinational companies. The fight against Corporate-Company Raj needs to be intensified.

Programmes were also held in Gunupur in Rayagada, and other places in Odisha.

The AICCTU concluded its campaign held from 16 September to 28 September under the slogan ‘Save Workers’ Rights’.

At the Mugma Area office gate and Sindri FCI gate in Dhanbad District of Jharkhand a protest march and meeting were organized on this occasion.

Jan Sanskriti Manch Bokaro organized an awareness campaign by youth and members of society from 23 September to 28 September, on issues including employment or unemployment allowance for youth, opposing privatization, ending contract system, regularization of contract workers, and withdrawal of Labor Codes.

The Jharkhand Nirman Mazdoor Union organized a mass meeting at Salaiya Tand, Bhelwaghati in Devri. Hundreds of construction workers participated in the meeting. Speaking in the local Santhali language, adivasi women Phulmuni Kisku and Badki Vaske expressed the troubles and travails of construction workers facing financial distress and unemployment, and said that no means of livelihood are available to them now. They said that their family folks were working as migrant workers in Kolkata and Maharashtra. If the government does not do something for them, they would be left with no option but to die. Nirman Mazdoor Union Secretary Bhuvaneshwar Kewat said that the Central government is bent on destroying workers and farmers. This government is pro-corporate and anti-farmer, anti-worker. They are giving corporate companies free license to loot. But the workers and farmers of Jharkhand will unite and fight and force the government to revoke anti-people decisions. CPIML leader Usman Ansari said that all successive governments have been aware of the troubles of workers and farmers in Bhelwaghati but no government has done anything for them. He said that the government should announce a special economic package for the workers of Bhelwaghati.

In Uttarakhand, AICCTU’s Workers Rights campaign concluded at Buddha Park in Haldwani with a program on Shaheed Bhagat Singh’s birth anniversary in which various Left organizations participated. Remembering Bhagat Singh and his ideology, a pledge was taken to fight against the Company Raj unleashed by the current dispensation. It is noteworthy that AICCTU has organized a nationwide campaign from 16 September against the Modi government’s pushing workers into slavery through abrogation of 44 labor laws and implementing the 4 labor code Bills. The campaign concluded with resounding slogans of ‘Save Democracy-save the Country-Build the India of Bhagat Singh’s Dreams’, ‘End Privatization-End Corporate Company Raj’, ‘Save Farmers’ and Workers’ Rights-End Adani Ambani Raj’, and ‘End Labor Code Bills that push Workers into Slavery’. Organizations participating in the protest included AICCTU, CRALOS, CPIML, Pachhas, Sansera Union, and Pragatisheel Mahila Ekta Kendra. AICCTU Uttarakhand State General Secretary KK Bora said that the the forcible passing of the 3 farm Bills and the Labor Code in the name of labor reforms show that the Modi government cares nothing for democracy, Parliament, farmers or workers.

In Gujarat, CPIML Ahmedabad committee held a rally from Amraiwadi to the Bhagat Singh statue at Khokhar Circle. The rally was led by Laxmanbhai Patanwadia and Amit Patanwadia.

The Delhi Construction Workers’ Union held programmes on dozens of places in the capital.