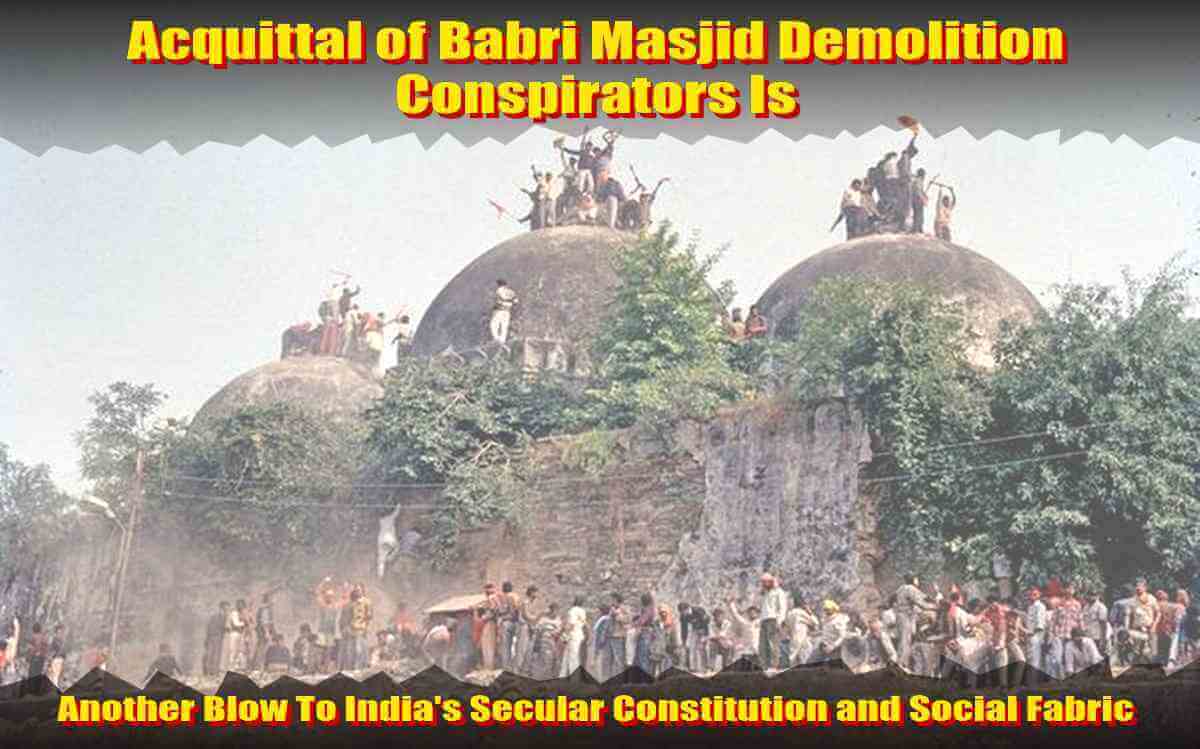 A CBI court has just acquitted all those accused of conspiring to demolish the 16th century Babri Mosque in Ayodhya on 6 December 1992. This verdict, coming on top of the Supreme Court verdict handing over the mosque site to the Ram Temple Trust, is the final nail in the coffin of justice for victims of hate crimes in India. These verdicts are an incentive for perpetrators of hate crimes, assuring them that they can enjoy the political and material fruits of such crimes with total impunity.

The accused had included senior BJP leaders LK Advani who had led a Rath Yatra (chariot procession) building up a frenzied demand for a Ram Temple to be built at the exact site where the mosque stood. This demand had the demolition embedded into its structure, and the Rath Yatra was accompanied by Hindu supremacist violence against Muslims which took many Muslim lives. Advani stood and watched as the supporters amassed by him used sophisticated tools to bring down the mosque. Yet, Advani has been cleared of conspiracy charges. In fact the CBI Court has endorsed the BJP's open lie that the demolition was spontaneous and not the result of a planned conspiracy.

Uma Bharti and Murli Manohar Joshi were caught on camera celebrating as they watched the mosque being demolished. They boasted of their role in the demolition. Yet they stand acquitted. Sadhvi Rithambara's poisonous speeches calling for the massacre of Muslims and demolition of this and other mosques, are a matter of public record. Yet she stands acquitted.

As BJP and RSS cadres demolished the Babri mosque they cried "Ek dhakka aur do" (strike yet another blow). Those blows were aimed not only at the mosque but at India's Constitution and India's secular social fabric. This verdict is "yet another blow" to the same end.