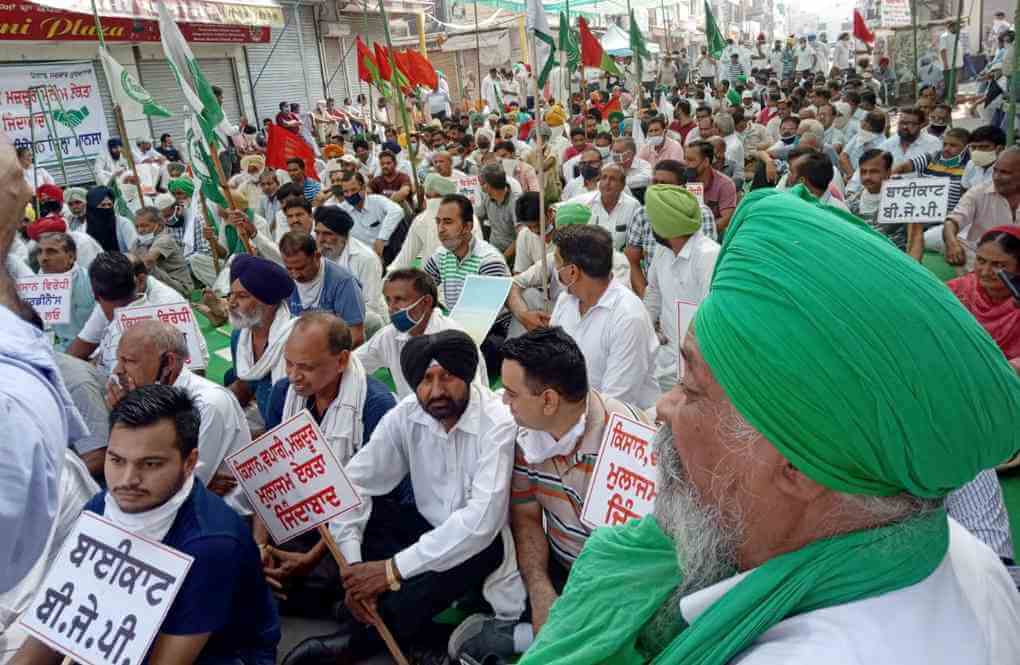 Farmers and farm workers on 25 September rose up in rage and gave the clarion call for a countrywide struggle against the three anti-farm Bills passed forcibly and treacherously without vote, making farming and the right to food slaves to corporate and multinational companies. More than two crore people participated in the Bharat Bandh protests at the call from farmers’ organizations across the country including Punjab, Haryana, Western Uttar Pradesh, Tamil Nadu, Karnataka, Telengana and Madhya Pradesh. The bandh was actively supported by the people from all walks of life including Trade Union organizations, students, youth, women, poets, writers, artists and political parties.

The All India Rasta Roko and Bharat Bandh was historic and expressed the anger of India’s farmers against the undemocratically and forcibly enacting laws against them and their livelihoods to favour corporates and big capital. The farmers’ organisations have decided to continue their resistance further. They will hold a March To Delhi programme from all corners of the country on 26-27 November. The All India Kisan Struggle Coordination Committee (AIKSCC), a frontal body comprising nearly 250 farmers organisations, has also appealed to farmers to hold village level public meetings on 2 October to pass resolutions boycotting elected peoples’ representatives who had not opposed the passing of these anti-farmer Bills.

Following 25 September the farmers agitation is continuing in various states and on the occasion of Shaheed-e-Azam Bhagat Singh’s 113th Birth Anniversary on 28th the protests were held on thousands of places. Karnataka witnessed a complete bandh on this day demanding withdrawal of three anti-farmers’ Acts and four Labour Code Acts.

The AIKSCC has called for MSP Adhikar Divas on 14 October and appealed to the farmers to gather at Mandis and Tehsil headquarters on this day demanding MSP according to the recommendations of Swaminathan Committee and to refute the misguiding and false propaganda by central government regarding these Acts.

All India Kisan Mahasabha (AIKM) conveyed revolutionary greetings and congratulations to farmers of the country for the unprecedented and resounding success of the Bharat Bandh and thanked civil society for their support. AIKM reiterated that the people of the country will never allow farmers and farming to be enslaved and handed over to corporate and multinational companies. Farmers in Punjab and Haryana have started the boycott of BJP and its allies who forcibly passed these anti-farmer Bills without vote. This boycott will spread to all other parts of the country also.

The AIKSCC had also called for countrywide protest against other anti-farmer measures like petrol-diesel price hike and Electricity Bill 2020. Kisan Mahasabha leader Purushottam Sharma said that BJP-RSS are allowing private Mandis to operate which will eventually have a monopoly over crop procurement and will procure at a very low price. All governmental procurement, storage and distribution will be ended. The Modi government is cheating farmers by calling the Mandi Bill ‘price assurance’ and the contract farming Bill ‘income assurance’. In the end farmers will become slaves and their lands will go to the hands of usurers.

The Right to Food has also been attacked through these three Acts. Food grains, pulses, oil crops, potatoes and onions have been removed from the list of essential goods. In truth these are the Acts to give free license to black-marketing and 75 crore ration-beneficiaries will be forced to buy food grains from the open market.

The greatest effect of the Bandh was seen in Punjab where 31 farmers’ organizations came together to make it a resounding success. They received unequivocal support from all sections of society. People arranged langars at various places for the farmers. Many trains were cancelled and the chakka jam was a huge success. The Rail Roko Andolan continues in Punjab till 2 October. The bandh was particularly successful in Mansa where AIKM National President Ruldu Singh said that farmers would give the Modi government a befitting reply to this attack on them. The rally at Bhikhi was addressed by Punjab Kisan Union State Secretary Gurnam Singh.

The Bandh received resounding success in Haryana and Rajasthan. Protests, road jams, effigy burnings and other programs were also held at various Districts in Tamil Nadu including Salem, Shivagangai, Dindigul, Kalladaikuruchi, Thiruvannamalai, Thenkasi, Mayiladudurai, Thanjavur, Cuddalore, Madurai, Dhrmapuri, Karur, Trichy and Pudukottai . Farmers’ organizations associated with AIKSCC participated in the Bandh in Karnataka at various places including Bengaluru, Bellary and Koppal. AICCTU and AIARLA also played an important role in the success of the Bandh in Karnataka.

Protests were also held and Bandh was observed in various other States including Andhra Pradesh, Odisha, Maharashtra, Delhi, Tripura and Assam.

In Rajasthan responding to the call Left Democratic and social organizations organized a march in Udaipur on 25 September at the Anaj Mandi and resounded with slogans in support of the farmers’ struggle. The march also demanded to guarantee the crop purchase by the government; and full waivers for all agricultural loans. CPIML leader Saurabh Naruka said that farmers across the country are on the streets in the struggle against these 3 Bills and the farmers want answers to the question of MSP being fixed at 1 ½ times the crop outlay; guarantee of crop purchase by the government; loan waivers for all farmers. What was needed is to expand the the Mandi system to reach all farmers as today it is only 6% of farmers who can reach to the Mandis. Human rights activist Rinku Parihar said that in view of the Corona pandemic crisis full loan waivers for all farmers are a necessity. Writer Prof Hemchandra Chandalia said that the need of the hour is to make a policy for guarantee of income for rural workers and the poor. Ambedkar Memorial Welfare Society advocate PR Salvi said that purchase, storage and distribution of paddy, pulses and oil crops must be under the government sector only in order to guarantee Right to Food for the country. Speakers also demanded to curb forward trading and fix quantitative limits for imports. At the conclusion of the rally copies of the three anti-farmer Bills were burnt. 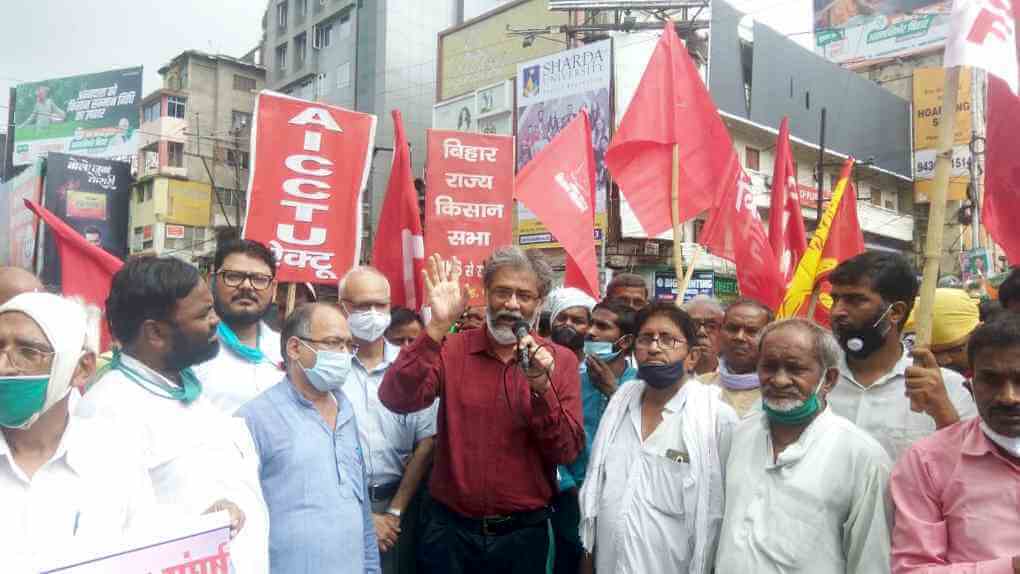 Protests across Bihar against Passing of Anti-Farmer Bills

Addressing the meeting, Dipankar Bhattacharya said that the entire country is protesting against these anti-farmer Bills with bandhs and road jams at various places. These Bills are extremely dangerous for farmers. The way they were forcibly passed in the Rajya Sabha without a majority is nothing short of murder of democracy, which the country will never accept.

He further said that we do not accept the auctioning off of agriculture and pandering to corporate houses by the Modi government. Today students, youth and common citizens have come out in support of farmers. An anti-farmer government cannot rule this country. We reject this Company Raj. Earlier, British Company Raj was prevalent in our country; if they now think that Adani-Ambani Company Raj will prevail in this country, they are mistaken. This fight will continue till these Bills are withdrawn. This will be an issue in the Bihar Assembly election and the farmers will express their anger in this forthcoming election.

AIKM General Secretary Rajaram Singh said that all the farmers’ organizations of the country are on the streets today. Workers’ organizations are also with us in full support. We will not allow the Modi government’s anti-farmer Bills to be implemented in the country. They are selling the country’s assets one by one to private companies. We will not accept this. This government has not made a law for MSP but is bent on stealing agriculture from the farmers. This will not be allowed to happen.

The protests at Paliganj were led by AISA General Secretary Sandeep Saurabh. Led by Gopal Ravidas, the main crossroads at Masaurhi were jammed for hours by CPIML and AIKM cadres.

The protests at Ara, Tarari and Agiaon were led by Raju Yadav, MLA Sudama Prasad and Manoj Manzil. Protest marches at Siwan and Jehanabad and Arwal were led by Amarnath Yadav, Rambali Singh Yadav and Mahanand.

The Sarpanch of Nandgarh village in Punjab, Comrade Gurmeet Singh, called a meeting of the Gram Panchayat and Gram Sabha where a resolution was passed to demand withdrawal of the three anti-farmer Acts passed by the Central government and to socially boycott BJP leaders and cadres.

Women have been protesting night and day in front of the Mansa Deputy Commissioner’s office during the 5-day dharna called by the CPIML and Mazdoor Mukti Morcha. The dharna was addressed by Mazdoor Mukti Morcha District President Comrade Nikka Singh Bahadurpur, CPIML leaders Jasbir Kaur, Narinder Kaur and Krishna Kaur.