Stop Mann ki Baat Nonsense and Listen to Us: Farmers to Modiji 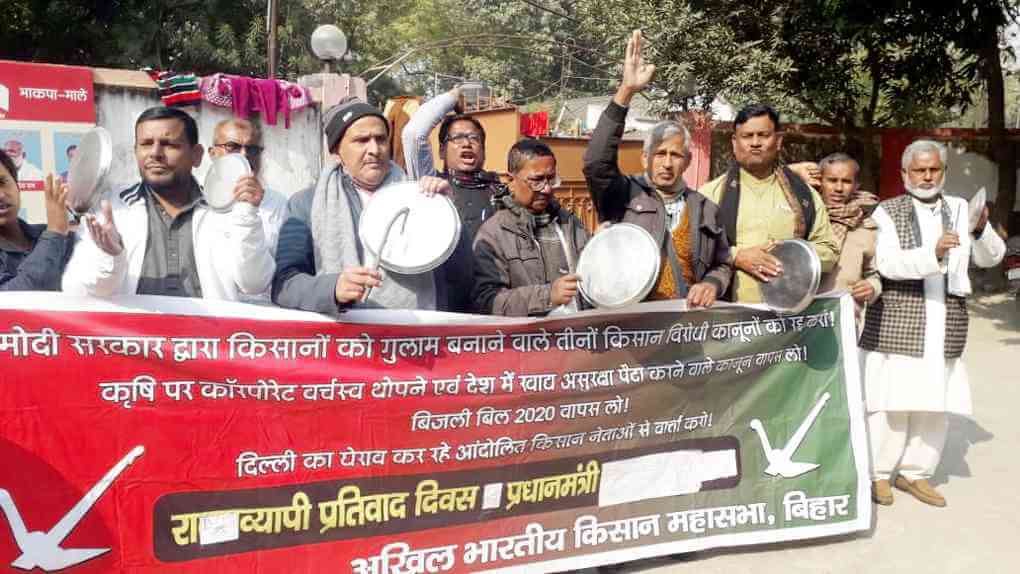 Responding to the nationwide call given by AIKSCC, All India Kisan Mahasabha leaders and activists and farmers across Bihar clanged plates during Prime Minister Modi's Mann ki Baat address and registered their protest. This program was carried out extensively in the capital Patna as well as rural areas in the State.

Kisan leader Ramadhar Singh said that farmers ave been agitating for a month now for their just demands and many have died due to the bitter cold, but there is no effect on the Modi government. PM Modi should listen to the farmers but instead he is busy spouting nonsense in his own Mann ki Baat whilst selling off the country's farmers and farming to corporate houses. The BJP government has no concern for farmers and its only agenda is to serve corporate interests. Instead of speaking with the farmers and showing sensitivity, the Sangh gang is constantly trying to defame and divide the farmers' movement.

He further said that the people have begun to understand the BJP's anti-farmer politics. The farmers of Bihar have also joined the battle. They will march to Raj Bhavan on 29 December to demand repeal of the 3 anti-farm laws and the Electricity Bill 2020, and guarantee of paddy purchase at MSP. Tens of thousands of farmers from across Bihar will participate in the march. Bihar was the first State to end the Mandi system and puah its farmers into ruin. The BJP-JDU government has betrayed the farmers of Bihar. Chief Minister Nitish Kumar must answer the question, where in Bihar are farmers getting MSP for their paddy produce? The Bihar government is not even providing the money for PACS to purchase storage sacks.

The kisan leaders said that today Bhagat Singh's Punjab and farm movement leader Swami Sahajanand's Bihar are beginning to share an unbreakable bond of unity, and this is making the BJP very afraid. The farm movement led by leaders like Sahajanand Saraswati shook the zamindari system to its very roots. In the 70s and 80s the farm movements in Bhojpur and what was then Central Bihar created history. Today once again small and medium farmers and sharecroppers in Bihar are up in arms. The entire country is looking to Bihar with hope, and the Raj Bhavan march on 29 December will once and for all put paid to the BJP's lie that there is no anger among the farmers of Bihar against the 3 new black anti-farm laws.