The Message for 2021 from the Delhi Border: Fight Fascism, Reject Company Raj! 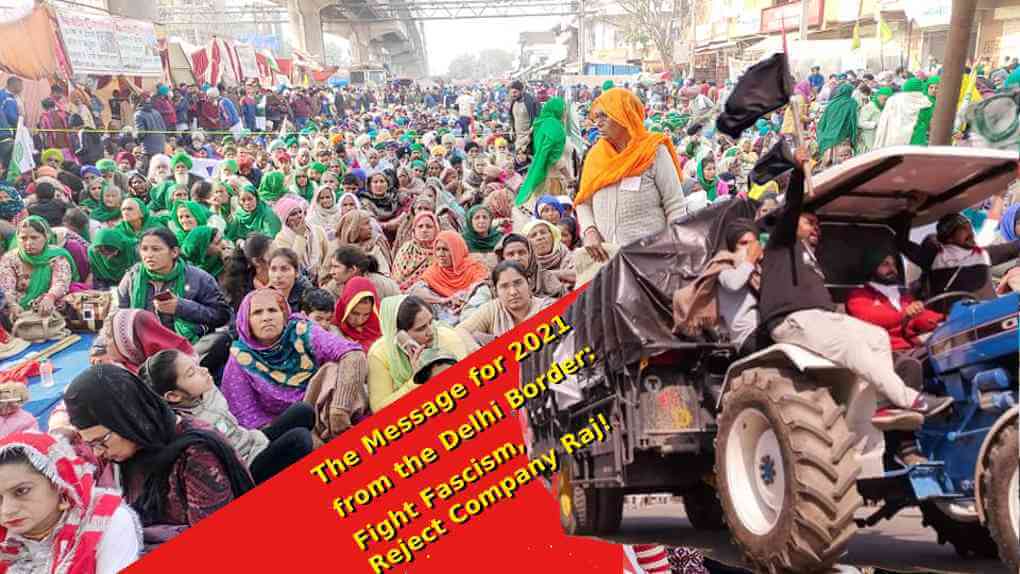 The world  has probably not seen a more difficult and challenging year than 2020 since the devastation of the world wars in the first half of the twentieth century. An extraordinary public health emergency claimed more than a million lives across the world and virtually brought normal social life and economic activities to a standstill as country after country sought to check the epidemic by imposing various degrees of lockdown for weeks and months together. Given the critically deficient state of public health infrastructure in India, and the utterly cruel, coercive and arbitrary nature of the Modi model of lockdown, India has had to suffer enormously on both counts – the epidemic and the lockdown, and even as the year draws to a close the devastation continues unabated.

While the people of India have been reeling under the combined havoc wrought by the epidemic and the debilitating lockdown, the Modi government came up with the slogan of turning the crisis into an opportunity. Correctly decoded, this new slogan means worsening the crisis of the common people to produce opportunities for the rich and the powerful. And parliamentary democracy has been brazenly ‘sanitized’ and reengineered to do it with clinical precision. Nothing illustrates this surgical strike on democracy more vividly than the way the Modi government has gone about enacting the new farm laws in utter disregard of the interests and opinions of the entire agricultural population in India. The farmers of Punjab who were once lauded by India’s ruling classes for spearheading India’s ‘green revolution’ have now been declared persona non grata, indeed sworn enemies, in Modi’s “new India”.

In the middle of the peak epidemic the government first promulgated three ordinances in early June and Punjab farmers immediately began protesting. The whole of Punjab soon rallied around the protesting farmers and the Akali Dal minister felt compelled to quit the Modi cabinet in Delhi. The Punjab Assembly unanimously rejected the ordinances and even BJP leaders started resigning from their own party. Instead of paying heed to the protests, the Modi government came up with the bills and bulldozed Parliament into passing them into law. And now when farmers across the country are demanding repeal of these pro-corporate laws, the government has cancelled the winter session of Parliament! Meanwhile, there is evidence pouring in from all corners of the country of the Adani group frantically building its agribusiness infrastructure in ‘anticipation’ of the new laws. The ordinances and the dubiously passed laws merely formalized the plot already hatched by the government in collusion with its corporate cronies.

The year 2020 had begun on the rousing note of the citizenship movement when Shaheen Bagh became a household name with Muslim women taking the lead, and the spirit of Shaheen Bagh permeated the whole country. Just when the prolonged interruption caused by the disruptive combination of the pandemic and  lockdown and the conspiracy hatched by the Modi government and the Sangh brigade to crush and defame the protests by perpetrating a pogrom and booking protesters under draconian laws made people wonder if and how the spirit of Shaheen Bagh could be rekindled, the farmers arrived in their tractors and trollies, defying water cannons, overcoming dug up roads, breaking through barbed wire fences, and pitched their tents around Delhi. They have not only given us our Kisan Shaheen Baghs, they have nullified the BJP’s design of crushing the farmers’ movement by unleashing police repression, they have rekindled the spirit of 1857 when peasants in uniform had marched to Delhi and unfurled the flag of freedom against the British Company Raj. Today India’s farmers have once again encircled Delhi, this time to resist the fascist rulers and reject their design of shackling India to an unbridled Adani-Ambani-Company Raj.

From Shaheen Bagh to Singhu Border and Tikri Border, 2020 has been a glorious year for India’s democracy, holding up the tremendous potential of people’s assertion to stop India’s descent into a fascist abyss. The Modi government tried to isolate, defame and crush Shaheen Bagh by presenting it as a misguided movement of Muslim separatists and now it is hatching a similar conspiracy against the farmers’ movement, projecting it as a jamboree of Khalistan separatists and rich farmers of Punjab. Revolutionary communists must foil this design not just by strengthening the resistance around Delhi but by spreading the spirit to every nook and corner of India and backing up the Delhi NCR resistance with a countrywide mobilization of all sections of farmers, workers and common people. The response evoked by the 26 November trade union strike and 8 December Bharat Bandh clearly points to the possibility of a great convergence of struggles of diverse sections of people. And the outcome of Bihar elections indicates the growing possibility of taking the spirit of resistance to the electoral arena.

Let us usher in 2021 on the rousing note of the farmers’ resistance. Forcing the government to take back the anti-farmer farms laws will be a big victory not just for India’s farmers but for all sections of people fighting against corporate aggression and fascist takeover. And this will also equip us effectively to meet the challenges of the next round of Assembly elections, including the crucial poll battles of West Bengal and Assam. More power to India’s fighting farmers! Victory to India’s battle for democracy!