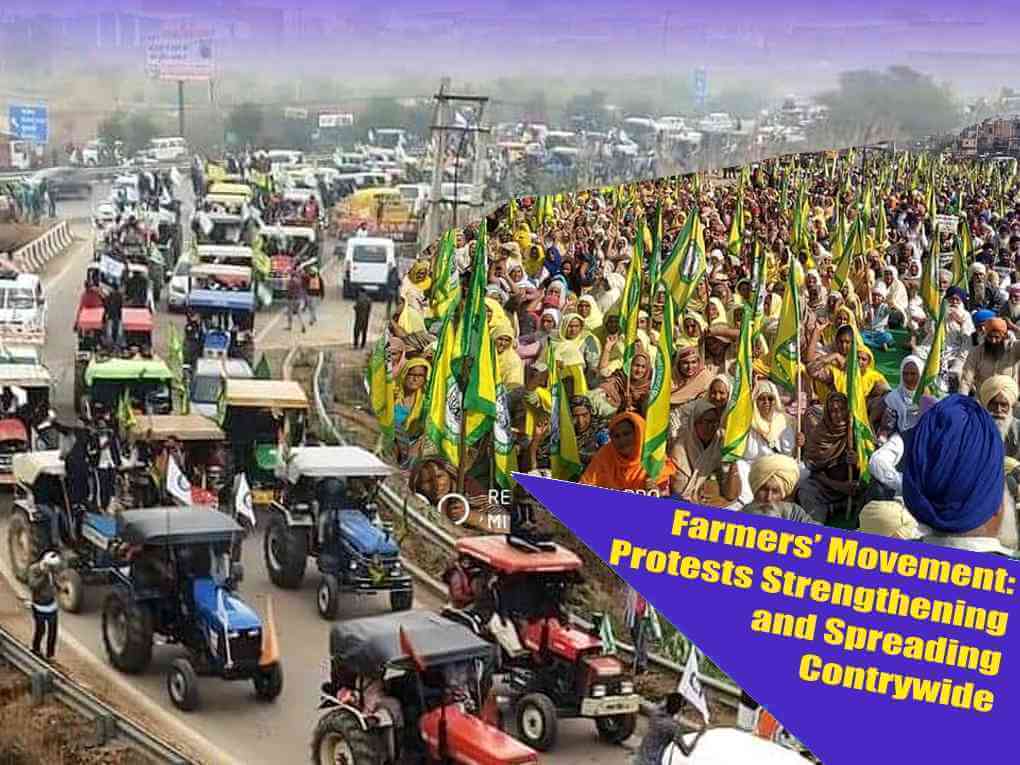 With more and more farmers coming in at the borders of the capital the Delhi citizens are witnessing a history in the making. The Kisan Sanyukt Morcha spearheading the ongoing farmers’ movement against the three anti-people Farm Laws of Modi government, has announced a series of programmes which will be held across the country in all states. On 13 January on Lohri the farmers will burn copies and the three Laws, on 18 January Mahila Kisan Day will be observed, on 23 January Subhash Chandra Bose Birth Anniversary will be commemorated and on Republic Day, 26 January Tractor parades will be held towards Delhi and all over India.

In a recent statement AIKSCC and Samyukta Kisan Morcha, THE joint front coordinating more than 500 farmers’ organisations, have said in a statement that the government is trying to misguide while the fact is that the “3 laws will lead to corporate control over agricultural production, processing, and markets. Will lead to high cost of inputs, higher debts on peasants, lower the crop prices, increase farmer losses, decrease govt procurement, end PDS, raise food costs, higher farmer and agri-worker suicides, hunger deaths, eviction from land due to debts. The Government has hidden these hard facts from people and courts.” Farmers will continue with the announced protest programmes and will not join the Supreme Court appointed committee whose members are are known for their support to the 3 Acts.

The Samyukta Kisan Morcha has informed that the farmers are doing indefinite sit-in strike at more than 20 places in Bihar. Farmers have held meetings at more than 80 places in Chhattisgarh and they are preparing to join the protest at Delhi borders. In Gulbarga of Karnataka, people have staged a bike rally to protest against three farm laws. Hundreds of farmers from Kerala are coming to Delhi borders. The anti-farmer face of the Central Government is being exposed in Maharashtra under the Pol Khol Yatra. Big demonstrations were also held in Vijayawada and Hyderabad. In Rajasthan and Haryana, farmers are joining the agitation under the Jagrukta Pakhwada (Awareness Fortnight) and various demonstrations are being held in many districts.

The CPIML said that the human chain across Bihar called by the Mahagathbandhan parties will be held on Mahatma Gandhi martyrdom day 30 January, for the demands for repeal of the three black anti-farm laws, withdrawal of Electricity Bill 2020, guarantee of paddy purchase at MSP, ending paddy procurement limit, reinstatement of mandis in Bihar, and other demands. Gandhi had started the farmers’ movement against the Tinkathiya system from Bihar’s Champaran which went on to become the foundation for the entire freedom movement. Today the BJP government has once again tried to inflict Company Raj on the country through these anti-farm laws, and again Bihar will script history in this struggle for freedom against Modi’s Company Raj. The above statement was made at a press conference in Patna addressed by CPIML and Kisan Mahasabha (AIKM) leaders.

In Bihar, District and Block level protests and indefinite farmers’ sit-in are ongoing under the AIKM banner since 5 January, attended in large numbers by small farmers, sharecroppers and farm workers. All the CPIML MLAs are also participating in these dharnas. Mass meetings are being held at the dharna venues. The dharnas in Champaran include the demand for price fixation for sugar cane along with the above demands.

Kisan Panchayats are also being organized in the state from 15 January to 26 January where farmers are taking pledge to intensify struggle to repeal of the three black anti-farm laws. Pressure from the agitations has forced the government to back down and raise the limit for paddy procurement. The new target has been raised from 30 lakh metric tons to 45 lakh metric tons. But on the other hand the government has shortened the procurement date from 31 March with 31 January as the new date. CPIML has condemned this decision by the Nitish government saying the Paddy will be ready at the main production centers by February only, so the government must withdraw this decision without delay.

CPIML Bihar Secretary said that Bihar is the state where APMC Act had been repealed in 2006 hence people in the state are already aware of the adverse consequences of these three laws. APMCs were replaced by Primary Agricultural Cooperative Societies (PACS) which are dependent on banks for cash as the government provides no financial aid to them. Banks provide only one installment (for purchase of 403 quintals of paddy) at a time, and the next installment is released only after the money has been returned by the PACS. This process is very complicated and slow. The fraud and corruption in PACS is also well known. Farmers get a maximum of Rs 1600 per quintal. An extra of 5 kg per quintal is added in the name of defects like moisture and sponginess of the paddy. The government must end the paddy procurement limit and guarantee procurement of paddy from all farmers.

All India Agricultural and Rural Labour Organisation (AIARLA) General Secretary Dhirendra Jha said that only a few Panchayats are procuring paddy in Bihar and even there the PACS Chairmen are refusing payment of proper price. He narrated an incident at one Panchayat in Darauli Block in Siwan District where one tractor of paddy was weighed and only after that farmers were informed that government rates would not be paid, to which the farmers replied that in that case they would not sell their paddy. At this the farmers were set upon and beaten brutally. PACS should be mandated to procure paddy at MSP. The government is not providing PACS with money even to buy sacks, and institutional corruption is being encouraged and facilitated.

The indefinite dharna under the banner of All India Kisan Mahasabha at Gardanibagh in Patna continued on the second day on 8 January was attended by hundreds of farmers. Similar dharnas are being held at all District and Block HQs. The dharna was addressed by AIKM National Vice President KD Yadav, AIARLA General Secretary Dhirendra Jha, AIKM State Joint Secretary Umesh Singh, Phulwari MLA Gopal Ravidas, Patna District Secretary Kripa Narayan Singh and other leaders and presided over by kisan leader Madheshwar Sharma.

Addressing the dharna, KD Yadav said that nowhere in Bihar is paddy being procured at MSP and PACS Chairman and middlemen are indulging in huge corruption. He said that the tens of thousands of farmers who wanted to submit a memorandum to the Governor on 29 December appeared as terrorists to Sushil Modi. The Bihar government wielded lathis on the farmers without listening to them. Dhirendra Jha said that the Bihar government ‘s claims that it wants to procure paddy at MSP is exposed by its act of curtailing the procurement date from 31 march to 31 January. Farmers will fight till their demands are met and paddy is procured at Rs 1868 per quintal. Other speakers said that the farmers of Bihar have started to unite against the anti-farmer attitude of the government. They pointed out that Nitin Gadkari has unwittingly exposed the Modi government’s lie when he said that the demand for MSP is wrong as it is more than the market price. Through the dharna the decision to manufacture ethanol from food crops was strongly condemned as this would increase food insecurity. The demand was made to reinstate the APMC Mandis in Bihar and to procure paddy at MSP of 1868/1888.

The dharnas are ongoing in all Districts including Bhojpur, Siwan, Arwal, Darbhanga, Bhagalpur, Nalanda, Gaya, Jehanabad, Rohtas and Vaishali.

The third day of the sit-in was addressed by leader of CPIML legislative party Mahboob Alam, Darauli MLA Satyadev Ram and Paliganj MLA Sandeep Saurabh. Mahboob Alam said that this farmers’ dharna across Bihar has disproved the lie being spread by BJP-JDU that there is no farmers’ movement in Bihar. In fact, the movement is no longer confined to farmers; agrarian workers have also joined it in large numbers. AIARLA leader Satyadev Ram said that small farmers and farm workers are the hardest hit by the three new black laws which will end food security, promote black marketing and ruin farmers. Paliganj MLA Sandeep Saurabh said that the ongoing farmers’ movement is the new freedom movement and the government will have to accede to the will of farmers.

Farmers in Bhojpur are on dharna along with their sacks of paddy and demanding procurement at the MSP, while daily protest marches are on at Siwan and Samastipur where the administration has refused permission for the dharna.

Farmers organized a protest on 7 January 2021 with 50 trollies of paddy under the All India Kisan Mahasabha banner in Jagdishpur Block of Bhojpur and forced the administration to procure all 50 trollies of paddy at Rs 1868 per quintal + Rs 50 per sack. The protest was led by AIKM National Council member and Tarari MLA Sudama Prasad and former MLA and kisan leader Chandradeep Singh. Undre pressure of the movement district adminstration arranged to procure paddy at the MSP.

AIKM National Council member and former MLA Chandradeep Singh said that along with these dharnas AIKM has also started a movement for paddy procurement at MSP. On 8 January the Jagdishpur local administration was gheraoed and forced to procure 40 trollies of paddy at MSP.

AIKM is also demanding on the issues of reinstatement of APMC mandis in Bihar and procurement of paddy at MSP.

Supporting the ongoing farmers’ movement against the three black farm laws, AIKM senior leader Comrade Bahadur Singh Jangi said that despite the martyrdom of more than 70 Satyagrahi farmers at the borders of Delhi, the Agriculture Minister and the Modi government remain subservient to corporate interests and refuse to take back the laws while pretending to be farmers’ well-wishers. But this lie cannot be sustained and the government will have to repeal these three black laws because farmers, workers and youth of the country are determined to save their livelihood and land from the very people who were elected to serve them.

AIKM State President Anand Singh Negi said that not only farmers but also the common people are supporting this nationwide protest against the three black anti-farm laws. CPIML District Secretary Dr Kailash Pandey said that the movement led by martyred revolutionaries Nagendra Saklani and Molu Bhardari hammered the last nail in the coffin of the Tehri state. This legacy will be carried forward by Uttarakhand’s farmers who will root out pro-corporate anti-farmer policies.

The first day of the Kisan Yatra started from Car Road and proceeded with meetings and people’s programs at Adarsh Gaon, Gaula Gate, Indra Nagar, Trolley Line and other places. The Kisan Yatra will be held from 11 January to 25 January. On 25 January 2021 a Kisan Rally will be held at the martyrs’ memorial Shaheed Smarak.

Indefinite Dharna in Bhind in Support of Farmers

The indefinite dharna in support of the ongoing farmers’ movement is being held at Gandhi Market in Bhind. Addressing the dharna, AIKM Vice President Comrade Devendra Singh Chauhan said that the Modi government should climb down from its stubborn stand and repeal the three black laws and enact a law guaranteeing MSP. Comrade Narendra Singh Sengar said that all the farmers in the region should put up a united fight. Kisan leader from Ater BK Bohre said that this is an existential fight for farmers and all farmers should stand united. Suraj Rekha Tripathi said that the Modi government is crawling in front of corporate houses and betraying the farmers of the country, therefore this government should be thrown out from its roots. The struggle for farmers’ rights will now be fought by the common people of the country.