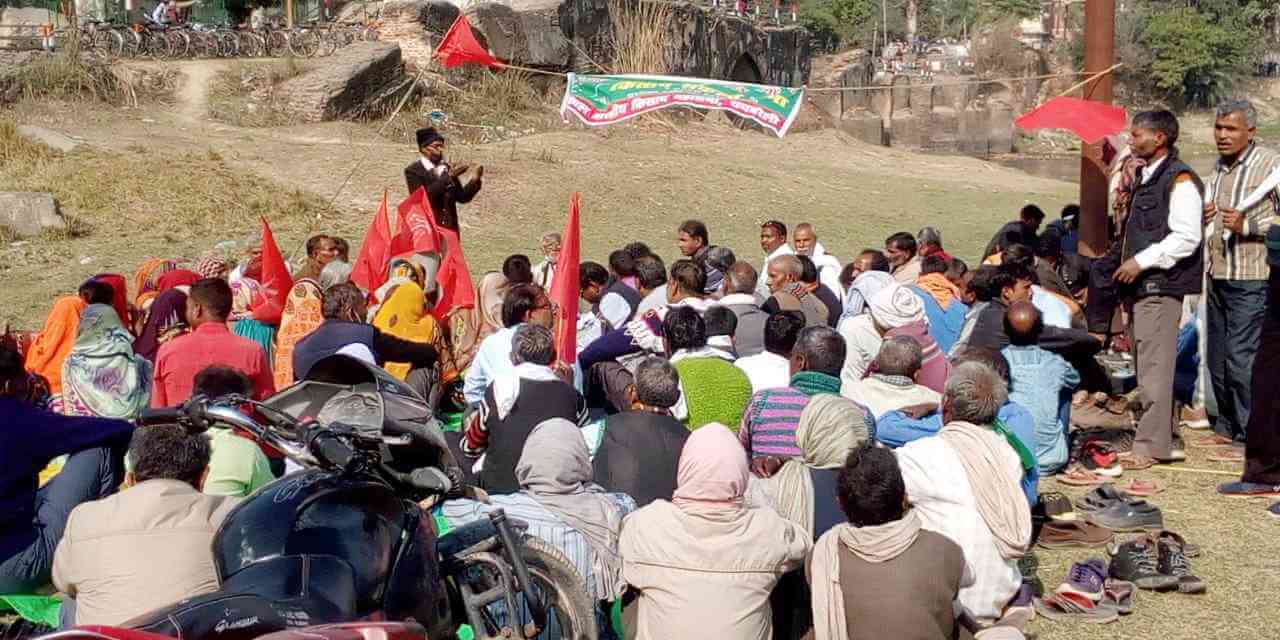 The All India Kisan Mahasabha organized a memorial meeting ‘Kisan Sankalp Sabha’ on 7 January at the Munshiganj martyrdom spot on the 101st martyrdom day of those killed in the Munshiganj shooting. After tributes were paid to the martyred farmers, farmer-worker leader Comrade Vijay Vidrohi addressed the meeting and said that farmers had embraced martyrdom a hundred years ago in the struggle against landlords and the British; and today as the Modi government wants to make farmers slaves of corporate companies the farmers of the country are being martyred in Delhi. He said that whatever the farmers have achieved, they have done so through struggles. The Modi government will have to bow down and accept their demands.

AIKM District President Phoolchand Maurya said that farmers do not have the freedom to fix the price of their crops. Today farmers in Delhi are fighting against the Company Raj imposed on them by the Modi government and they will continue to fight till freedom is achieved.

A photo and poster exhibition was put up at the Munshiganj martyrdom spot in memory of the martyred farmers.

A mass protest was organized on 7 January at the Palia Tehsil HQ in Lakhimpur Kheeri in support of the ongoing farmers’ movement in Delhi. Farmers’ organizations, workers and women held a protest and submitted a memorandum to the Deputy Collector addressed to the President of India.

A dharna was organized in Patehara Block in Mirzapur District on 7 January in support of the ongoinbg farmers’ movement in Delhi for repeal of the three black anti-farm laws, and to demand strict punishment for the guilty persons in the heinous gang rape and murder of an Anganwadi worker at Badaun.

RYA held a meeting at Kanpur on 7 January attended by State Secretary Sunil Maurya. The meeting expressed outrage and condemned the brutal gang rape and murder of a dalit Anganwadi worker in Badaun. Holding the government responsible for the incident, the meeting demanded punishment for the guilty persons.

The meeting also expressed full support for the ongoing farmers’ movement in Delhi and discussed plans to intensify the struggle against Uttar Pradesh Special Security Force (UPSSF) and the Prohibition of Unlawful Conversion of Religion Ordinance 2020 (so-called Love Jihad Law). Plans were also made to organize youth and intensify the struggle for the demand for right to employment.

Women in Shivpur burnt the effigy of Uttar Pradesh Chief Minister Yogi Adityanath on 7 January at Gauri Bazaar Block in Devariya District in protest against the brutal gang rape and murder of a dalit Anganwadi worker in Badaun. Slogans of ‘Oust Yogi, Save Uttar Pradesh’, ‘Yogi Modi Beware’ and ‘Stop Violence against Women’ were raised at the protest. A large number of women attended the protest including Comrades Parvati, Nirmala, Madina, Zarina, Sundari, Gudiya and Sonmati.