Bihar: On the Eve of Republic Day CPIML For A Human Chain in Support of Farmers Movement 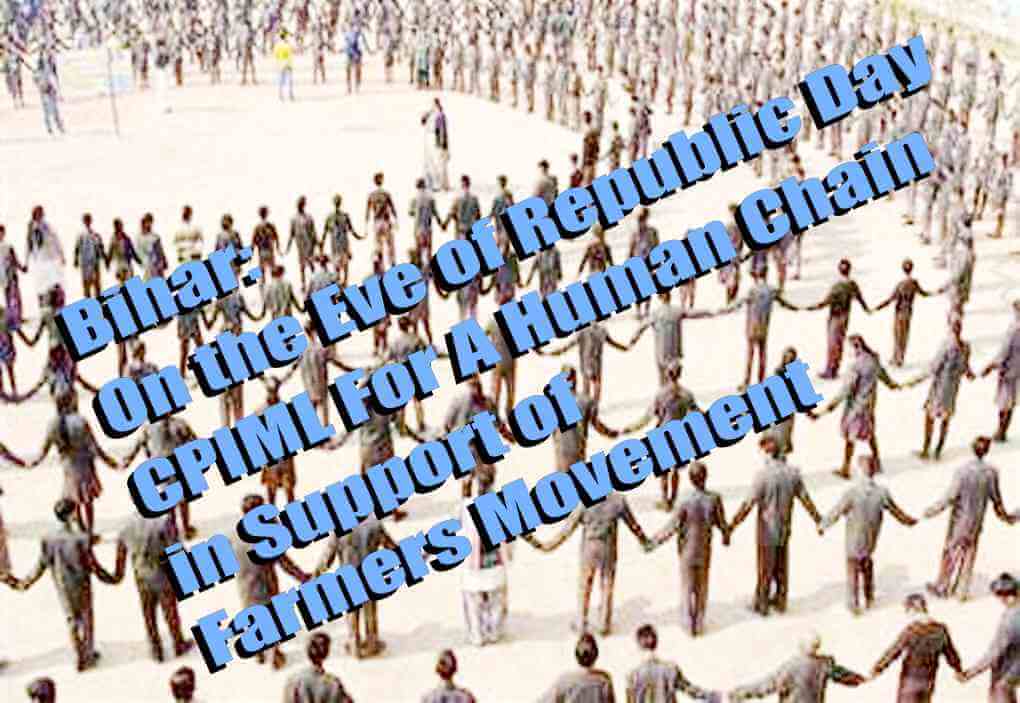 CPIML in Bihar has written a letter to Mahagathbandhan parties RJD, CPI and CPM to appeal for a joint human chain across Bihar on 25 January on the eve of Republic Day in support of the ongoing farmers' movement.

CPIML has said that the ongoing farmers' movement for repeal of the three black laws, withdrawal of Electricity Bill 2020 and guarantee of MSP as per Swaminathan Commission recommendations has become a national movement. Despite the bitter cold, the number of farmers on the Delhi borders is consistently increasing. Many farmers have even lost their lives but the government remains stubborn and is just making a show of holding talks while trying to defame and divide the farmers.

The letter says that the BJP is trying to weaken the movement by saying that it is a movement only of big farmers and of Punjab, but in the recent past many agitations have been organized in Bihar led by the Opposition parties. We were all together and united in the Bharat Bandh on 8 December. Tens of thousands of farmers in Bihar proved through the histoic Raj Bhavan march on 29 December that they have understood the true intent of the Modi government to sell off farming and farmers to corporate houses and impose Company Raj on the country. Large numbers of small, medium, sharecropping farmers and farm workers participated in the Raj Bhavan march. The support of farmers from Bihar has definitely given new strength and energy to the farmers camping on the Delhi borders.

The CPIML letter to Mahagathbandhan parties pointed out that one year ago the BJP tried to isolate the anti-CAA-NRC-NPR movement by saying that it was a movement of Muslims alone. All of us accepted this challenge and said that CAA-NRC-NPR is not just against minorities but against the poor, workers and common people and against democracy and the Constitution. We fought that draconian provision unitedly and Oppostion parties in Bihar organized a human chain across the State on 25 January 2020.

On the same lines, a united initiative is needed against these three black anti-farm laws. With a human chain once again on the eve of Republic Day we can take the Bihar farmers' movement to a new high and give more strength to the farmers' movement across the country.