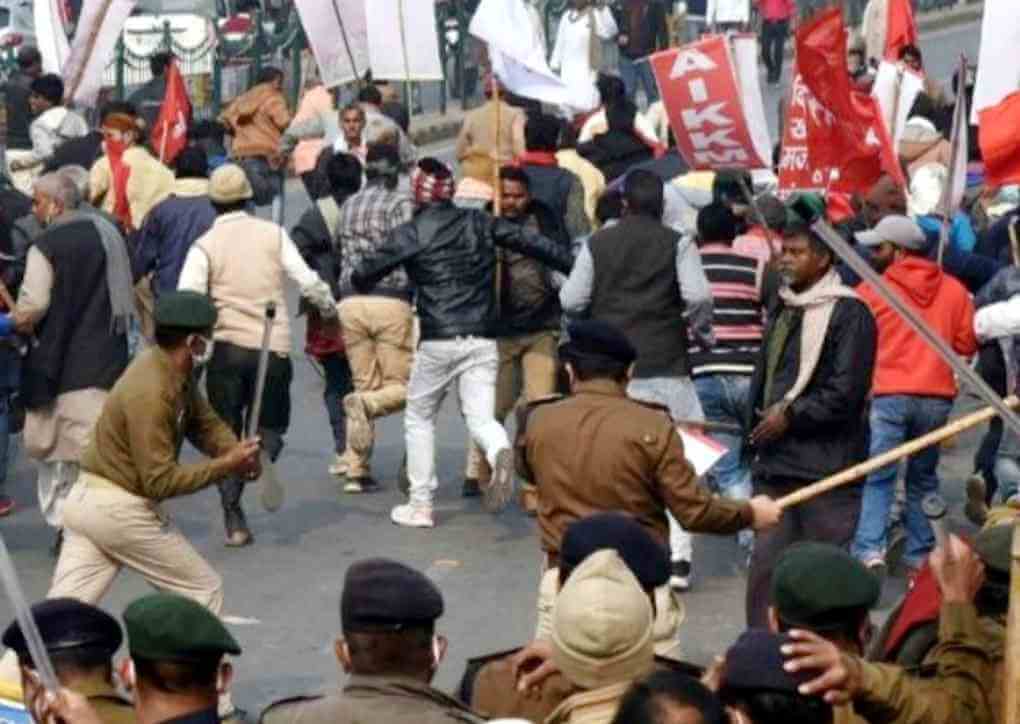 All India Kisan Mahasabha General Secretary and AIKSCC Bihar-Jharkhand in-charge Rajaram Singh condemned the lathi charge on farmers during the historic Raj Bhavan march on 29 December and warned the Nitish government to refrain from such repressive acts on the farmer’ movement. Tens of thousands of farmers from across Bihar had come to Patna with their just demands and wanted to submit a memorandum to the Governor, but the insensitive administration chose the path of repression and lathi charge on the farmers. The farmers’ movement has reached Bihar in a big way and cannot be quelled through repression. It is the government which must step back and bow down to the farmers.

The march to Raj Bhavan on 29 December was led by Comrade Rajaram Singh, Ashok Prasad, Lallan Chaudhury, AIKM State Secretary Ramadhar Singh, State President Vishveshwar Prasad Singh and raised slogans and banners to demand repeal of the three anti-farm laws, withdrawal of the Electricity Bill 2020, guarantee of crop procurement at MSP, and the reinstatement of the Mandi system in Bihar.

Soon after the march started from the Gandhi Maidan, the police wanted to stop it at JP Chowk but the protesters wanted to submit their memorandum to the Governor. The administration resorted to pushing and shoving at JP Chowk but was unable to stop the sea of farmers. The march moved forward to Dak Bangla where the administration again resorted to violence and lathi charged the farmers, injuring many.

The farmers blocked Dak Bangla Chowk and started their meeting. Addressing the meeting, Comrade Rajaram Singh said that in the 70s and 80s the farm movements in Bhojpur and what was then Central Bihar created history. Today once again small and medium farmers and sharecroppers are up in arms. The entire country is looking to Bihar with hope, and today’s march puts paid to the lie that there is no anger among the farmers of Bihar against the three new black anti-farm laws.

Other leaders addressing the meeting said that the Mandi system was ended in Bihar in 2006 itself and as a result paddy is not being procured on time anywhere in Bihar; the question of procurement at MSP is a far cry. The ruin that NItish Kumar inflicted on the farmers of Bihar in 2006 is being sought to be inflicted on the entire country now. We wish to ask Nitish Ji, where in Bihar are farmers getting MSP for their crops? The intent of this government is only to cheat farmers.

Rajaram Singh in a statement on 30 December 2020 congratulated the farmers, sharecroppers, farm workers and their various organizations on the historic Raj Bhavan march on 29 December.

He demanded that the Nitish government should guarantee crop procurement at MSP by the government from farmers and sharecroppers and pass a farm ordinance in the Bihar Assembly against the three black anti-farm laws of the Centre in order to give relief to the farmers of Bihar.

He also demanded withdrawal of all false cases against farm leaders and activists and said that AIKM leader and Ghosi MLA Rambali Singh Yadav was part of the joint delegation to meet the Governor, but an FIR has been registered against him. Such false cases have been slapped against other leaders also.

Rajaram Singh further said that the defamatory statement against the farmers’ movement by Sushil Modi is highly condemnable. Modi’s words evince his pro-corporate character as well as the BJP’s desperation and fear that the farmers of Bihar will join the struggling forces of Bihar’s farm workers due to these three new laws.