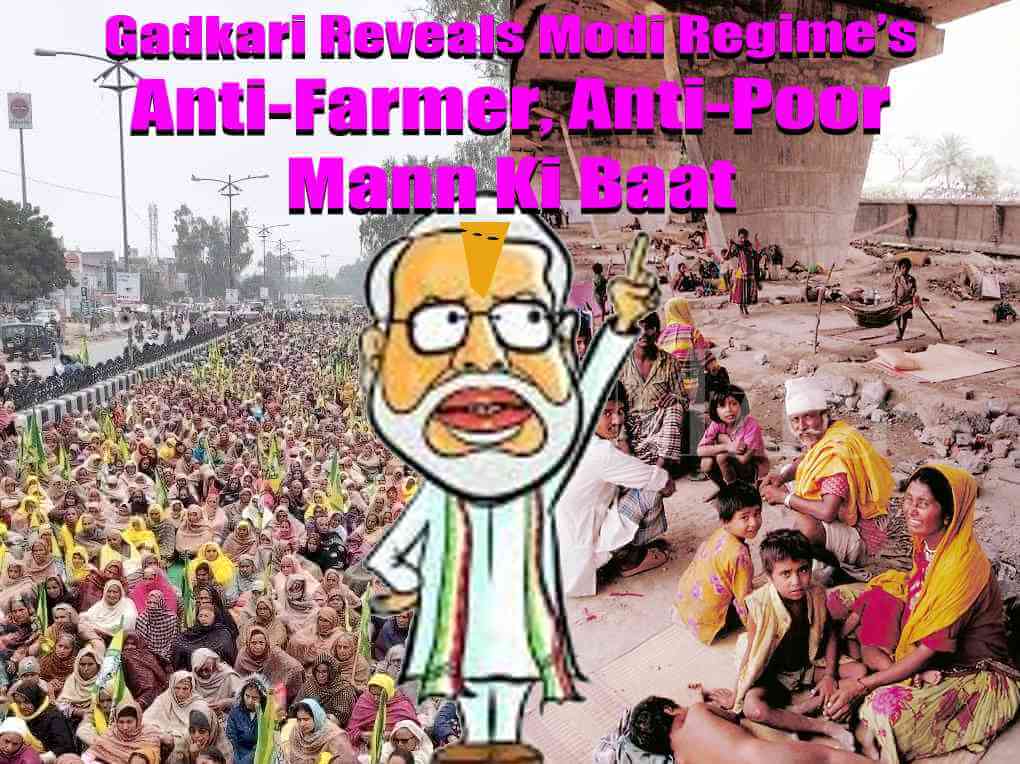 The seventh round of talks between the protesting farmers and the Modi regime have failed. The farmers, who continue to camp at Delhi’s borders in the bitter winter cold, braving thunderstorms and rain showers, have told the Government that nothing short of an outright repeal of the Three Anti-Farmer Laws is acceptable to them. The Modi regime remains adamant in its refusal to roll back these three laws.

The Government is finding it increasingly difficult to maintain the fiction that it is only rich farmers, and that too only farmers from Punjab who are protesting under instigation from the Opposition. At Delhi’s borders, farmers from Punjab and Haryana have been joined by farmers from Rajasthan, Uttar Pradesh, Madhya Pradesh, Bihar, Jharkhand and Tamil Nadu. In Bihar, tens of thousands of small and medium farmers and farm workers marched to the Governor’s headquarters to demand repeal of the farm laws. It is clear, moreover, that the farmers enjoy the support and solidarity of ordinary Indians.

Morally and politically, it is the farmers who have the upper hand. This is proved by the fact that the Ministers who met with the farmers’ delegation joined the latter in observing two minutes of silence in memory of the farmers who lost their lives during the movement. By getting the Ministers to participate in this symbolic gesture, the farmers have taken the wind out of the sails of the BJP propaganda that the farmers’ movement is illegitimate and comprises only “anti-nationals” and “Khalistani terrorists.”

Meanwhile, in an interview with a leading newspaper, senior member of the Modi cabinet and the BJP, Nitin Gadkari, made several remarks that confirm the farmers’ apprehensions about the Government’s motive behind the farm laws.

Gadkari made it clear that the new laws have been introduced to correct what he described as the “root causes” of India’s agriculture problems: “surplus foodgrains” ; and the fact that the MSP offered by the government for foodgrains is higher than the domestic and international market price. Gadkari actual words were, “Our MSP is more than the international and market prices, and that is the problem. I have been talking about ethanol for the last 12 years. But the permission to convert foodgrains (to fuel) was not granted. The root cause of the problem is surplus foodgrains and higher MSP than the market price.”

It is clear from Gadkari’s interview that the Government’s claims that the new laws will not only protect MSP, but in fact allow farmers the “freedom” to sell crops in the open market to companies at prices that are even higher than MSP, is a lie. Farmers obviously demand MSP because they know that market prices tend to be much lower; and also without MSP they will be forced to sell at distress prices. But the Government sees MSP as a problem, and has introduced the new laws to make sure that farmers have no option but to sell at much lower prices in the domestic and international market.

Also, it is clear from Gadkari’s interview that the Government has brought in the new farm laws to facilitate diversion of so-called “surplus” foodgrains away from the Public Distribution System and rations for the poor. The truth is that India’s “surplus” foodgrains rot in godowns while India ranks 94th among 107 countries in the Global Hunger Index, much behind its neighbours Bangladesh, Pakistan and Nepal. There is a “surplus” precisely because the Government has introduced a “targeted” Public Distribution System (PDS) instead of universal PDS, leaving a vast section of India’s needy people deprived and hungry. Now, instead of focusing on hunger as the key problem, the Modi regime is claiming that the “surplus” in overflowing godowns is the problem, and is prescribing a shift from foodgrains to biofuel. The contract farming being sought to be universalised through the new laws will, among other things, engineer this shift and push us into a state of external dependence for foodgrains and hence greater food insecurity for the poor.

What Gadkari does not spell out is that the Modi regime is seeking to get rid of MSP, force farmers to sell at rates fixed by domestic and international markets, and dismantle procurement and PDS, because it is seeking to obey the WTO diktats to cut down government support for India’s farmers.

India’s farmers see through the Government’s lies very clearly, and they stand firm in their demands to repeal the three new laws, lock, stock, and barrel. They have declared that on Republic Day, 26 January, they will drive into the capital city Delhi on their tractors, to assert their demands. Farmers at the frontlines of the struggle to save India’s Republic, asserting not only the farmers’ rights, but also the right of all citizens to protest, the right to food security and food rations, and the country’s freedom from Company Raj. India’s people stand with the farmers in this crucial fight.