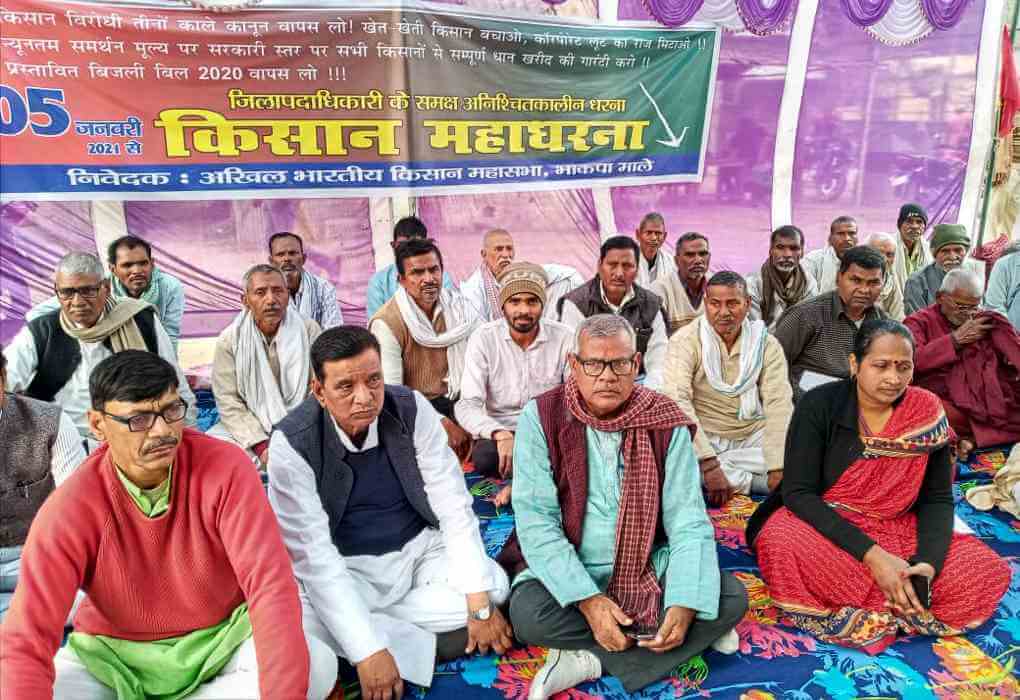 In response to the call given by All India Kisan Mahasabha and CPIML, indefinite sit-ins have started from 5 January in many Districts across Bihar to demand repeal of the 3 black anti-farm laws, withdrawal of the Electricity Bill 2020, guarantee of MSP for all crops as per the Swaminathan Commission recommendations, and reinstatement of the Mandi system in Bihar which had been abolished in 2006.

Hundreds of farmers are participating in the Mahadharna which started on 5 January in Tarari, Sahar, Piro, Charpokhri, Agiaon, Jagdishpur and Sandesh Blocks in Bhojpur. CPIML MLA and Kisan Mahasabha leader Sudama Prasad participated in these dharnas. The dharna at Arwal was attended by Arwal MLA Mahanand Singh. A farmers' Panchayat was organized at Narkatiyaganj, attended by Sikta MLA Virendra Prasad Gupta and AIKM State President Visheshwar Prasad Yadav. The demand for fixing sugar cane price and payment of arrears was raised through this Panchayat.

The farmers' dharna also started on 5 January at Nalanda, attended by Kisan Mahasabha National Office Secretary Rajendra Patel. In Siwan, hundreds of farmers affiliated to AIKM organized a march to raise their demands.

A sit-in of farmers also started on 5 January 2021 at Agiaon in Bhojpur.

A Mahapanchayat of sugar cane farmers was organized in Western Champaran on 5 January.

In addition to the demand for repeal of the 3 black anti-farm laws, the dharnas in Bihar also make two Bihar-specific demands: guarantee of paddy procurement at the rate of 1868/88; and reinstatement of the abolished Krishi Bazaar Committee.