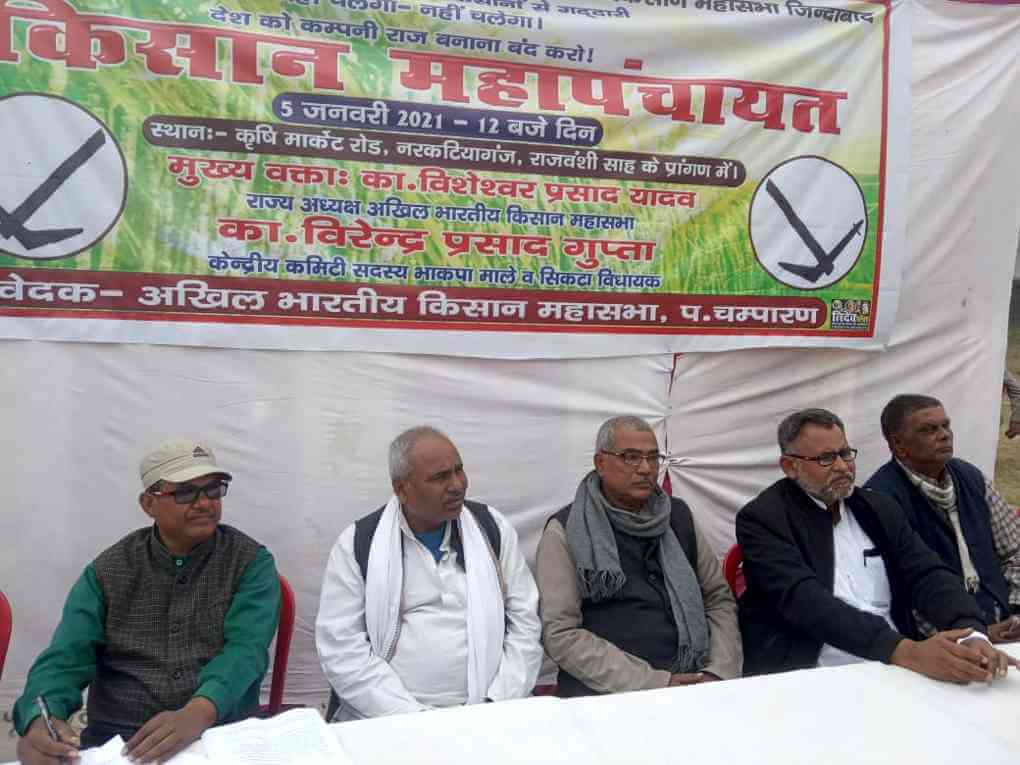 A farmers, Mahapanchayat was held in Narkatiaganj in Bihar on 5 January 2021.

Speaking at the Mahapanchayat, kisan leaders said that even after more than one month of the farmers' movement the Modi government is busy hatching all kinds of conspracies and false propaganda to defame the farmers. Farmers at the Delhi borders are daily being subjected to repression through false cases, lathi-charge tear gas, water canons, pepper sprays and other forms of torture. The Mahapanchayat demanded the repeal of the 3 black anti-farm laws and resolved to continue the struggle to save the country from this onslaught on the people by the Modi government.

CPIML MLA from Sikta Virendra Prasad Gupta said that farmers of Champaran and Bihar had been at the forefront of the historic struggles against British Company Raj. Today the fight is against Adani-Ambani Company Raj. When Parliament, Chief Minister, leaders and officials do not resolve the people's issues, the people come out on the streets and resolve the issues. The people have now camped on the borders of Delhi for the repeal of the 3 anti-farm laws. Similarly in Bihar paddy is not being procured and sugar cane farmers are not being paid for their crops. The farmers of Bihar will also resolve their issues on the streets. He appealed to farmers to participate in the indefinite dharna at District HQs from 6 January and make the human chain program across Bihar a resounding success.

AIKM District Convener Sunil Kumar Rao said that all sugar cane in the 'rejected' category by the sugar mills should be placed in the general category. He further said that sugar cane was being short-weighed and weighing machines controlled by farmers' organizations should be installed in front of sugar mill gates to prevent short-weighing.