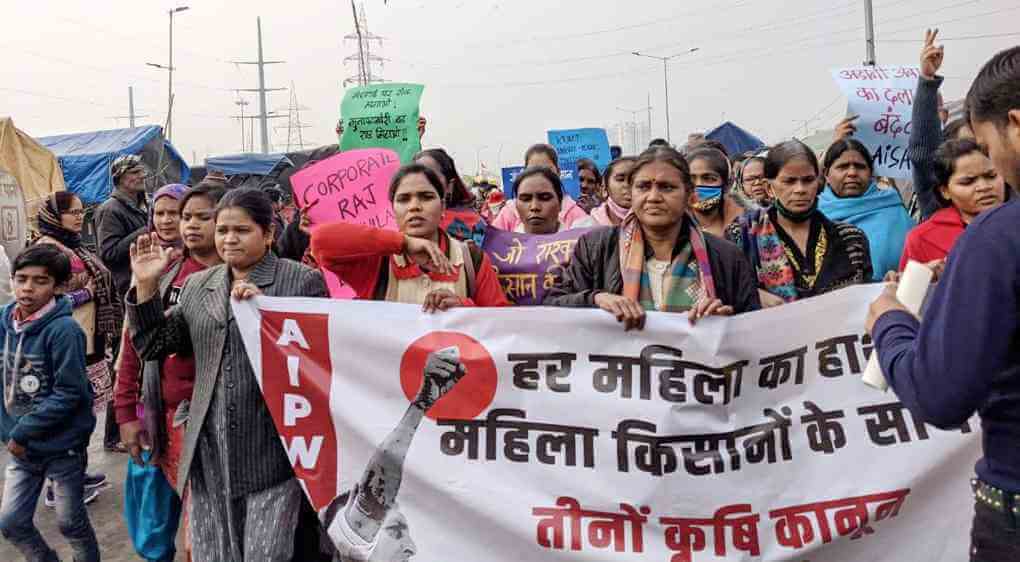 An AIPWA team visited the site historic farmers' struggle in Delhi where huge numbers of farmers are sitting in protest and people from across the country are joining this struggle in support of the farmers' demands.

AIPWA activist from Bihar Afshan Zabeen was part of this team. She described her experience in the following lines.

This was my first experience of participating in such a huge movement and I was filled with happiness and pride at the sight of this historic movement.

I reached Tikri border on 18 January which was Mahila Kisan Diwas (Women Farmers' Day) and women were at the helm of affairs and managing everything. It seemed as if the numbers of the protesters equalled their unity, especially the unity of the women. An interesting aspect on that that day I saw was that women were freely expressing themselves on stage, some through revolutionary and people-centric songs, some through speeches. A veritable sea of women was surging ahead at all the borders, Singhu, Tikri and Ghazipur. Even the groups who had come from far-off places to be part of this struggle had large numbers of women. There was an incredible energy and enthusiasm in all the women and they reminded me of the nationwide anti-CAA-NRC movement led by women.

In one section of the movement, women and men were working shoulder to shoulder to prepare and serve food. Langar was being served at places just meters apart. Not only was food taken care of, all the borders of Delhi had Shaheed Bhagat Singh libraries for wonderful reading material. I saw the amazing sight of all sections and ages of people immersed in reading, some in the library and some on their tractors. There are also medical camps set up at various places. As I was walking by one early morning, an elderly senior who was sitting on a tractor saw me and started raising the slogan, "Repeal the Black Farm Laws!" Slogans of "Modi Sarkar Murdabad!" (Down with the Modi Government) also echoed from place to place with such spirit and energy that I find difficult to describe in words.

There is a big difference in watching something on TV and seeing it actually unfold in front of one's own eyes. So much energy, and on such a large scale! The real world is something to be experienced directly and seen through our own eyes.