Campaign: 'We the People of Patna are with Farmers' 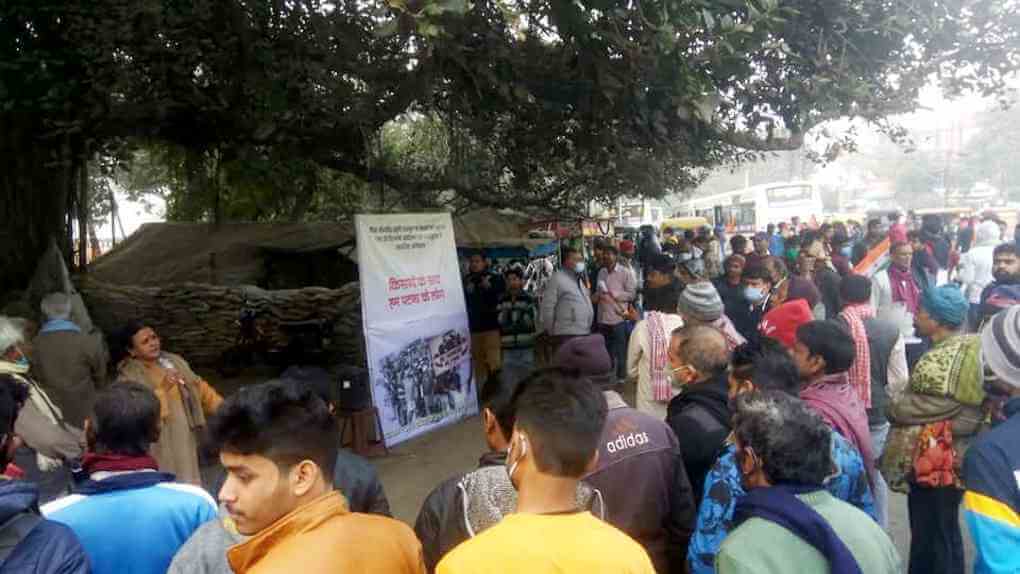 All India People's Front organized a weeklong program 'We the People of Patna are with Farmers' on 19 January at the Shaheed Bhagat Singh Chowk in Patna. The programme was concluded on 26 January at Digha Ghat in Patna.

The We the People of Patna with Farmers on the eve of Republic Day, on 25 January, was held at Danapur Station. Members of civil society attended in large numbers and appealed to people to raise their voice against the three black anti-farm laws.

'Filhal' Editor Priti Sinha said that the farmers at the borders of Delhi, 150 of whom have been martyred so far, are fighting not just for farming but for the country's independence. AIKM Joint Secretary Umesh Sigh said that we must fight united against the Modi government's bid to impose Company Raj and snatch away people's right to food.

Youth poet Krishna Samriddh recited his own poetry as well as senior poet Naresh Saxena's poems. Samta Rai, Aparajita, and Anil Anshuman from Chorus and Jan Sanskriti Manch presented people's songs. Conducting the program, AIPF leader Ghalib said the standing with the farmers' struggle is true patriotism. Insaf Manch leader Asma Khan said it is the people's responsibility to support this historic struggle by farmers for democracy and justice. Present at the program were a large number of people including JASAM convener Rajesh Kamal, Deepu and Mohd Sonu.

This campaign was attended by many citizens, intellectuals, academics who raised their voice against the three black farm laws passed by the Modi government.

The main speaker for the 18 January was former Head of the Department of History, Patna University Prof Daisy Narayan. She said that the government is spreading false propaganda that the farmers' struggle is limited to Punjab and Haryana and is a conspiracy by the Opposition. But the truth is that not only farmers but common people across the country are fighting the battle for their rights. This is a struggle to save the country's freedom and so needs extensive support of the people.

Conducting the program, AIPF leader Ghalib said that the campaign 'We the People of Patna with Farmers' started today on 19 Jan and would continue at various places in Patna till 26 January. Through this campaign social-political activists, poets, writers, teachers, doctors, singets, theatre artists, youth and workers will call for support to the farmers' struggle.

The campaign's next program was on 20 January at Chowk Shikarpur, Patna City.

On 22 January, the 4th day of the campaign held a gathering at the Kankarbagh Sabji Mandi in Patna. All India Kisan Mahasabha National Vice President Shiv Sagar Sharma addressed this and said that if farmers provide food for the 135 crore population of the country, they also know how to deal with those who want to steal the food from the mouths of the people. He appealed to all people to stand with farmers against the loot of Adani-Ambani Raj. Senior CPIML and AIKM leader KD Yadav said that the martyrdom of 147 farmers on the Delhi borders will not go waste and the Modi government will have to repeal these black laws. AISA leader Priyanka Priyadarshini recited a ghazal written by Dushyant and poet Sanjay Kumar Kundan recited his poetry about the certain downfall of this tyrannical government. AIKM leader Umesh Singh, Insaf Manch leader Asma Khan, Dr Prakash and Anuradha Singh also addressed the gathering attended by a large number of people

The fifth day of We the People of Patna with Farmers organized at Mithapur Bus Stand. Professor Dr Anil Rai said that the three black laws would not only ruin farmers but would snatch away the right to food from common people. AIKM leader Shiv Sagar Sharma said that the people of the country would teach a lesson to the anti-people pro-corporate Modi government and appealed for big participation in the human chain on 30 January. Environmentalist Ranjeev said that the entire world is looking to this farmers' movement with hope. Young poet Prashant Viplavi recited his revolutionary poetry. AIPF’s Ghalib remembered Netaji Subhash Bose on his anniversary and said we take inspiration from Netaji's fight against tyrannical rule.

On the 6th day at Pethiya Bazaar in Phulwari Sharif We the People of Patna campaign on 24 January was attended by a large number of people and addressed by CPIML Phulwari Sharif MLA Gopal Ravidas. He said that the Modi government wants to snatch away food from the common people and establish Company Raj in the country through corporate capitalists like Adani and Ambani. The people will never tolerate these draconian unconstitutional laws. He said that CPIML along with Mahagathbandhan parties would raise their voice strongly in the Assembly for the Nitish government to pass a resolution against the three black farm laws.

Economist Prof DM Diwakar explained the implications and unconstitutionality of the black laws in detail. Journalist Priti Sinha said that this movement is no longer just a farmers' movement but has spread to all people across the country. Poet Achint recited his own as well as Kedarnath Sngh's compositions. Journalist Mohd Imran said the farmers' struggle is a historic movement to save democracy. AIPF leader Ghalib pointed out the heartless insensitivity of the Modi government even after the death of over 150 farmers due to extreme cold.