Farmers' Movement Do or Die Battle for Us: Rameshwar Prasad 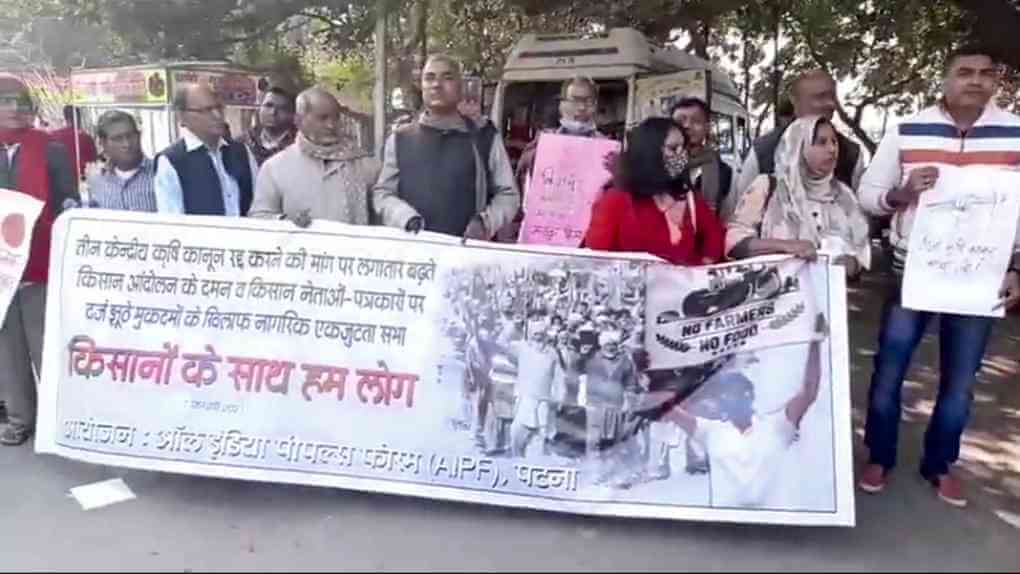 All India People’s Forum (AIPF) organized a program 'We the People are with Farmers' on 7 February 2021 in Patna. Former CPIML Member of Parliament and veteran farmer-labour leader Rameshwar Prasad was the main speaker at the program.

Comrade Rameshwar Prasad said that the ongoing farmers' movement is not just against the 3 farm laws but is also an existential struggle along with a battle to save democracy, the Constitution and the country. In this hour of crisis the Modi government has started selling off public assets to corporate houses. After privatizing the railways, airports and hospitals the Modi government is now selling off farming to corporates like Adani and Ambani and has forcibly and undemocratically passed the 3 new farm laws. The farmers of the country are engaged in a do-or-die battle for the repeal of these laws because the ruin of the food-grower is surely the ruin of the country.

Comrade Rameshwar also criticized the Bihar government and said that Nitish Kumar wants to end Mandis and doom Bihar, whereas it was in this very Bihar that Swami Sahajanand Saraswati struggled against the British and landlords and freed the peasantry from slavery. Today the Modi government is hell bent on bringing back that slavery and snatching away the common people's food and livelihood. He called upon all people to support the farmers' movement and save livelihoods.

All India Kisan Mahasabha leaders Vishveshwar Prasad Yadav and Umesh Singh said that farmers had sustained the country's economy during the Lockdown but now the Modi government wants to push them into ruin through these black farm laws. Environment activists Ranjiv, Nagesh Anand and Afzal Husain said that this is a battle between those who provide food and those who loot food.

CPIML youth leader Kumar Parvez, Insaf Manch leaders Mushtaq Rahat, Asma Khan and Afshan Zabin said that the people voted for the Modi government which has now proved to be anti-people.
'Chorus' presented people's songs and Samta Rai said that we are with those who sow grains and not with those who hammer nails into the soil. Social activist Ghalib conducted the program and said that we must all fight this battle together.