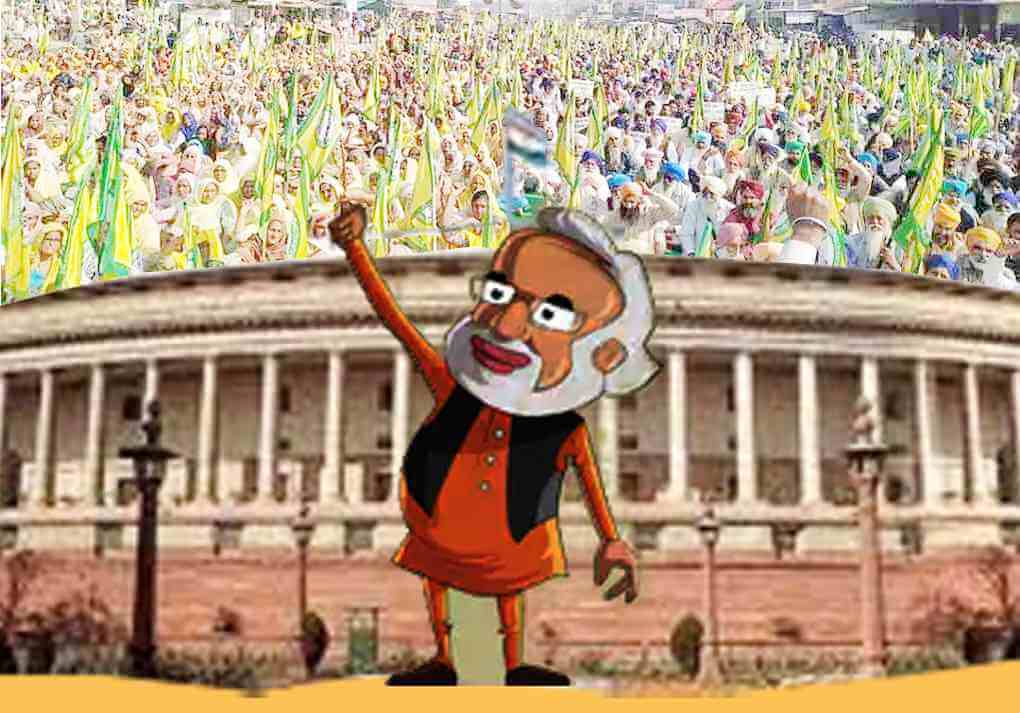 Prime Minister Narendra Modi's 8 February address from the Rajya Sabha platform is a classic textbook example of fascist propaganda. The occasion was the PM's reply to the debate on the motion of thanks on the President's inaugural budget session speech. The President's customary inaugural address was of course all about congratulating the government for all its claimed successes. The PM's reply to the debate is however meant to respond to the points raised by MPs in the course of the debate, but Modi's speech evaded all the points of debate, repeated the government's claims and rubbished all opposition, saying the country and even his opponents would appreciate his steps when it celebrates the centenary of freedom in 2047! Only Modi knows what is best for India - the characteristic defence of a despot who loves to project himself as a benevolent patriarch.

While the PM shed crocodile tears for small farmers in his speech, his government has reduced budgetary allocation on agriculture and allied heads. Even the allocation for the much trumpeted Pradhan Mantri Kisan Samman Nidhi (PM-KISAN), which only transfers Rs 6,000 in three instalments to small land-owning farmers who have land records in their own names, has been slashed by Rs 10,000 crore in this year's budget. Landless peasants, small farmers cultivating their family-held land or tenant cultivators operating leased-in plots are all denied even this paltry assistance doled out in the name of ‘kisan samman’. The Prime Minister ridiculed the question of loan waivers as 'election agenda' and not 'farmer agenda'. He also lamented that small farmers did not get bank loans. If small farmers are not getting loans that only exposes the government's much professed concern for small farmers.

The problem of indebtedness and the concomitant coercion around loan repayment has been the biggest factor driving hundreds of thousands of farmers to suicides in India. The demand for loan waivers has emerged in this tragic situation. Only a cruel despot can ridicule a life-saving demand as an 'election agenda'. And if loan waivers are an election agenda, PM-KISAN is even more so. In poll-bound West Bengal, Modi linked it explicitly with the BJP coming to power in the state, much the same way his party had promised free Covid19 vaccination in Bihar in the event of its poll victory. The farmers' movement never demanded a token monthly assistance of 500 rupees, its core demand has been fixation and guarantee of a fair Minimum Support Price (MSP) as recommended by the Swaminathan Commission.

The PM's empty assurance 'MSP tha, hai aur rahega' (MSP was there and will be there) sounded only as convincing as his statement after the India-China LAC clash, 'na koi ghusa tha, na ghusa hua hai' (there has been no intrusion into our territory). What the farmers demand is a legal guarantee for all farmers to be able to sell their crops at fair MSP. The government knows that farmers in most States, especially small farmers in whose name Modi is trying to push his disastrous farm laws, are subjected to distress sales. The prevailing market price in most cases is way below the MSP declared by the government, and by trying to pit the small and deprived farmers against the  supposed ‘beneficiaries’ of the MSP and APMC framework, the government is actually trying to render the MSP-APMC framework increasingly redundant. This is just yet another arena where the government is withdrawing from its responsibilities and sacrificing the interests of the common people at the altar of corporate profit and power.

The most diabolical point in Modi's Rajya Sabha address has of course been the demonisation of dissent, the characterisation of protesters as 'parasites' and 'conspirators', the instigation of a witch-hunt against democratic struggles by portraying the battle for justice and democracy as a conspiracy driven by 'foreign destructive ideology'. These are the words of a rattled regime which has failed to bamboozle the farmers with its laws, whose concerted propaganda against the farmers' movement has failed to hoodwink the common people, and whose fear of the farmers and the growing democratic solidarity around the farmers' movement has been graphically exposed to the global gaze. A regime which seeks to shield itself by erecting concrete barriers and barbed-wire fences, by digging up roads or studding them with nails, by cutting off internet, water and electricity, by deploying a whole battery of ministers, filmstars, cricketers and other celebrities to respond to just a couple of tweets by internationally acclaimed singers and activists, is a regime living in fear. It is trying to transfer its crisis and its fear to the farmers and the wider public. We, the people of India, must tell the rattled regime that it has lost the plot.