Citizens March in Delhi in Support of Farmers Struggle 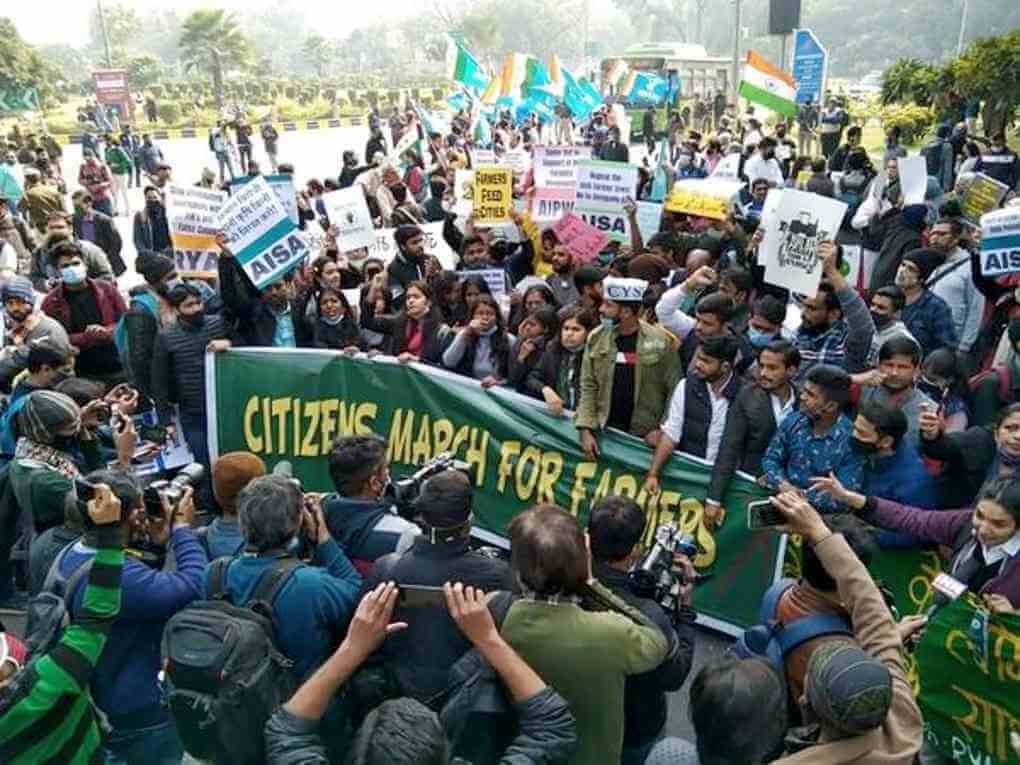 Hundreds of Students, Youth, Workers and Citizens Come Out in Delhi to Join Citizens’ March in Support of the Farmers Struggle.

As the Modi government intensify repression on the farmers struggle against the three anti-farmer acts, hundreds of Delhi citizens came out in support of the farmers in Mandi House today. Several organisations like AISA, AICCTU, AIPWA, ANHAD, SFI, DYFI, KYS, CYSS, PDSU, NSUI jointly gave a call of citizens’ march with the central slogan of “With Farmers, against Repression”.

The Delhi Police arranged massive repressive apparatus to stop the Citizen’s March. Massive regiment of police and paramilitary, barricades and water cannons were arranged to stop the peaceful march of Citizens in support of the protesting farmers. Despite all intimidating tactics, Delhi citizens gathered in large numbers to participate in the march. When the march was stopped from proceeding by use of force by police, the protesters held the Dharna at Mandi House itself.

Speaking at protest AIPWA Secretary Comrade Kavita Krishnan said, “The tactics that is being used to silence the farmers at Delhi borders can be seen here as well. What is the government afraid of? Why is so much force being used to silence the voice of farmers? The reason is that the farmers have raised the most uncomfortable question for the Modi government. They are saying that the policies of the Modi government is directed for benefitting few crony corporates. And to defend the profiteering motive of the private companies, the acts have been passed at the cost of land and livelihood of the farmers.”

JNUSU President Aishe Ghosh said, “The student community knows what is the meaning of Company Raj. The government that has brought the anti-farmer laws has also brought the National Education Policy to sell out public-funded universities and colleges to private companies. The farmers are fighting a battle to save the country and we are with them.”

Rajbir Kaur from Bhagat Singh Chatra Ekta Morcha said, “My sister Nodeep Kaur is in jail for last 20 days. She was sexually harassed by police and picked up for protesting for the farmers. 120 more farmers are in jail. What does the government want by suppressing voices of the farmers' movement? We demand that all activists jailed must be released immediately. We are here to defend the country, we are no criminals.”

Shabnam Hashmi from ANHAD, Prasenjeet from AISA, Maimoona Mollah from AIDWA and many others addressed the protesters.

The protesters resolved to continue the fight against anti-farmer acts. Citizens of Delhi will participate in any call given by the united farmers' platform including the call of Chakka Jam on 6th February.