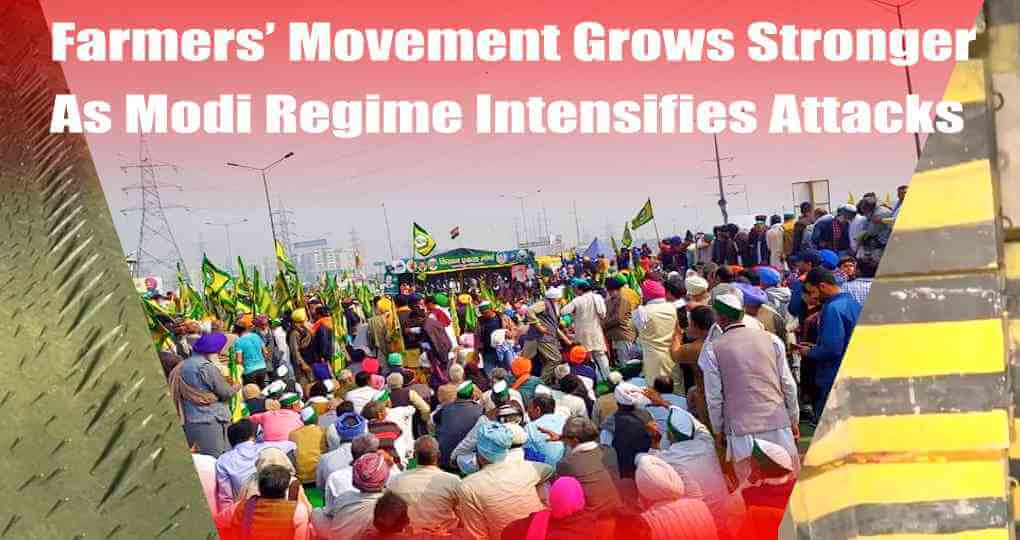 The farmers’ tractor parade on India’s Republic Day saw lakhs of farmers on Delhi’s streets, peacefully highlighting their demand for repeal of the three anti-farm laws, and being greeted with open arms by Delhi residents. The Modi regime, however, used a single aberrant incident at the Red Fort (an incident which has all the hallmarks of being orchestrated by the Government itself) to unleash all-out repression on the movement.

The repression, following the Shaheen Bagh pattern, has taken five forms: false allegations branding farmers as “anti-national” for desecrating the Indian flag;  physical attacks by police and Hindu-supremacist outfits on farmers; criminal charges against farm union leaders; criminal charges against journalists reporting on the farmers’ movement and the repression; fortification around the farmers’ protest sites and restrictions on railway routes to prevent other farmers as well as Delhi residents from being able to reach these sites.

On 26 January itself, the police used tear gas and batons to brutalise the farmers. One farmer, Navreet Singh, lost his life, and his family has alleged that he was a victim of police bullets. While the police is preventing Opposition politicians even from bringing water and other necessities to the protest sites, it has allowed Hindu-supremacist mobs masquerading as “locals” to enter the sites and assault farmers.

So far, nine journalists investigating and reporting on the allegations of police firing made by Navreet’s family have been charged with “sedition” and other offences. Journalists reporting on the violence by mobs and police at the farmers’ protest sites have been beaten up, dragged away, arrested, and then slapped with criminal charges. Farmers' organisations have reported about more than a hundred farmers being missing following the 26 January Delhi parade.

A large number of prominent farmers’ movement leaders, including the entire delegation that had been attending meetings with the government, have been named in in criminal cases that invoke draconian laws like sedition and UAPA. At least 120 farmers have been arrested and jailed. Electricity and internet have been shut down at the protest sites. Most outrageously, Twitter obeyed a “request” by the Modi regime and shut down a number of accounts that had been tweeting news of the movement.

Outside the farmers’ protest sites at Delhi’s borders, the police have set up fortified camps, bristling with barricades, deep ditches, and iron nails to prevent movement of trucks or tractors into or out of the sites. Trains coming from Punjab are being prevented from stopping at Delhi stations.

However, all these attempts to repress the movement have only made it stronger and more determined. The Uttar Pradesh Government’s crackdown on the Ghazipur protest site and the tears of prominent UP farmers’ leaders Rakesh Tikait were gleefully broadcast on media and social media as proof of the defeat of the farmers’ movement. But instead, the move backfired, and lakhs of farmers from Western UP flocked to the Ghazipur border the same night. Huge farmers’ panchayats are being held all over Western UP, demanding repeal of the three anti-farm laws and withdrawal of all cases against protesting farmers.

Even as the movement intensifies, the Budget presented by the Modi regime has drastically slashed funding for agriculture and rural welfare schemes, including PM-Kisan, MNREGA, price support schemes for oilseeds and pulses, interest subsidy on short term crop loans. In addition, government spending on anganwadi and maternity benefits; healthcare; and education has been slashed drastically. Dubious accounting practices have been used to “pad” up the budgets for “health and family welfare”, and for “drinking water and sanitation” – by counting the “Central Roads infrastructure Fund” under both the above heads!

The usual tactics of the Modi regime – fake news; communal division; repression; arrests of journalists and movement leaders – are failing to take effect. This time, each blow by the regime is only serving to increase the strength and resolve of the movement.