International Women’s Day 2021: Women’s Struggles For Liberation Are Under Attack Like Never Before 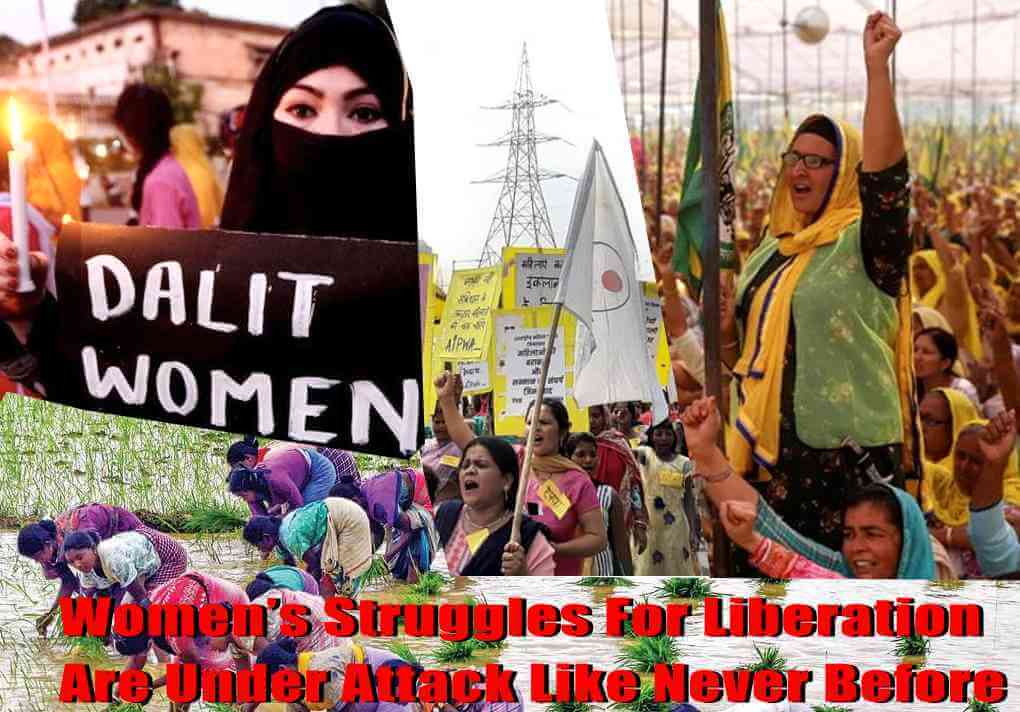 In India, International Women’s Day 2021 was observed under sombre and grim circumstances. India’s current rulers trotted out platitudes celebrating “women’s power”, “women’s empowerment” and “women’s achievements”, laced with sentiments on women’s social role from the fascist handbooks. But for women’s movements all over India, Women’s Day was an occasion to strengthen their unity and resolve to resist a hitherto unprecedented political assault on their very existence. With the Modi regime in power at the Centre and the various BJP regimes in many states, women’s movements are under attack like never before.

On Women’s Day, the Prime Minister Modi tweeted out his salutes to what he called “indomitable #NariShakti (women’s power)”, and the country’s “pride in the many accomplishments of the women of our nation”. Uttar Pradesh Chief Minister Yogi Adityanath’s IWD message was straight from the Nazi and Manuvadi handbooks. Disguised as praise, his message was a sermon to women, reminding them of the social roles and duties assigned to them by Hindu-supremacists. He said that women must “build the family and the home, bring up the children, and makes them good citizens”, so that they may contribute to “the making of an ideal family, ideal society and an ideal state.” This message echoes the Nazi slogan which exhorted women to serve the nation by confining themselves to “Kinder, Küche, Kirche” (children, kitchen, church). His message is also a summary of his 2009 article opposing women’s reservations in Assemblies and Parliament on the grounds that women’s freedom, unregulated by men, in the political and other spheres, would endanger the family institution and turn women into demons.

Over and over again, Yogi-ruled Uttar Pradesh which the BJP showcases as a laboratory for the Hindu Nation, is witness to horrific rapes where the police and BJP leaders collude to protect the perpetrators and intimidate and silence the survivors, the victims’ family members, and struggles for justice. UP is also the state which has led the way in introducing legislation seeking to regulate and curb inter-faith marriages, reminiscent of the notorious anti-miscegenation laws in Nazi Germany and apartheid South Africa.

On 8 March, International Women’s Day itself, the Chief Justice of the Supreme Court of India doubled down to defend his remarks telling a rape-accused man, “Will you marry her (the victim)? If you do, we can help you. If not, you lose your job and go to jail.” Adding his voice to the CJI’s, the Solicitor General of India representing the Government of India declared that it was “perfectly valid” for the CJI to have asked the rape accused if he would marry the victim. These defences which add insult to injury, came in the wake of nearly 10,000 signatories to an open letter demanding that Bobde step down as CJI since his remarks on rape while in that position, demeaned and endangered all women. Far from showing any remorse, the CJI and the SG joined forces to defend the indefensible. Flying in the face of all judicial precedents and best practices in India, these two representatives of India’s current executive and judiciary insisted that in order to decide on a bail petition by a rape accused, it was relevant to ask him whether or not he was willing to marry the victim.

The CJI episode alone tells us how women’s basic rights and dignity in India are at the mercy of dangerous ideologies that occupy and control the pillars of the Indian State today. With those like Bobde at the helm, able to get away even with the most outrageous and blatant misogyny, how can India’s Supreme Court be trusted to safeguard women’s freedoms which suffer daily attacks by the BJP-led governments and BJP-controlled legislatures?

The IWD tradition began more than a century ago with women workers and communist women asserting their rights and equality and celebrating the struggles for their liberation. All over India today, women workers – in government schemes, in factories and fields, in municipalities – are fighting the erosion of legal protections. The oppressive conditions of their work are reminiscent of 19th century capitalism. Women farmers are at the forefront of the farmers’ movement seeking to protect agriculture from a coup by the “Company Raj” represented by Modi’s cronies like Adani and Ambani. Women led the struggle against the CAA law which dismantles India’s Constitution by introducing a notion of citizenship that is anti-secular and anti-democratic. Women who lead these remarkable movements – from Sudha Bharadwaj and Shoma Sen; to Safoora, Ishrat, Gulfisha, Natasha and Devangana; to Disha Ravi, Nikita Jacob, and Nodeep Kaur – are being imprisoned by the Modi regime under draconian laws like the UAPA.

To paraphrase the teenage climate change activist Greta Thunberg’s words, what women want on IWD and every day is not congratulations or celebrations – but equality and freedom, and support for their fight for equality and freedom against the fascist and anti-feminist forces.