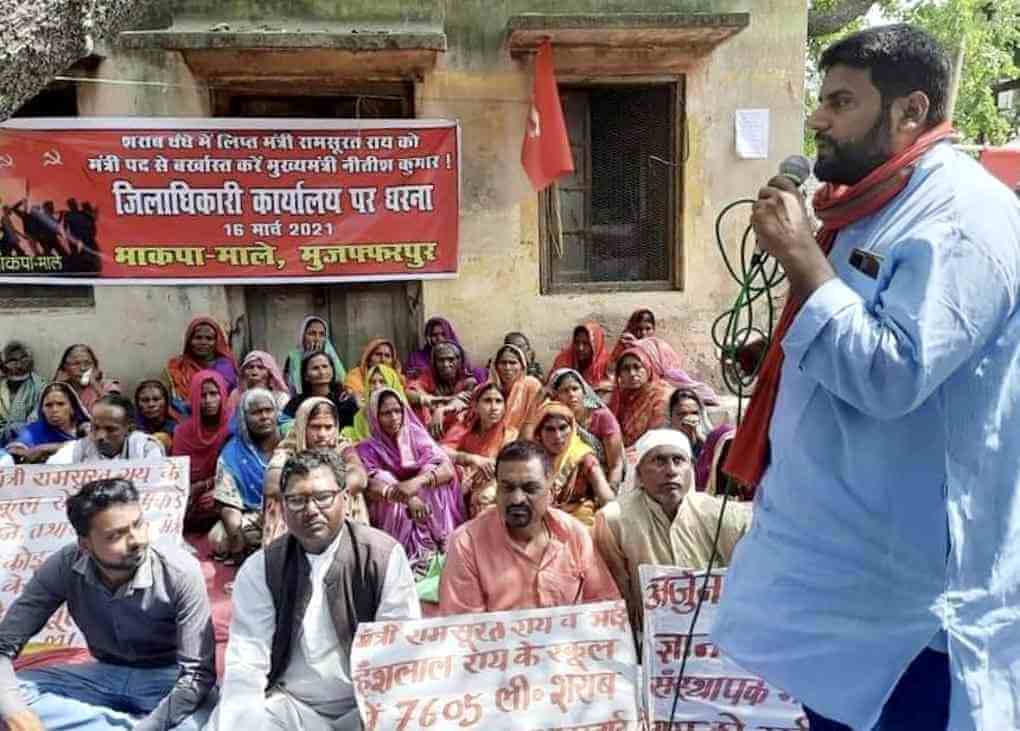 Bihar is completely in the clutches of the liquor mafia and criminals these days. CPIML MLAs raised their voice in the Assembly against Minister Ramsurat Rai from whose school, established in his father's name, illicit liquor was seized in large quantities. The illicit liquor business is flourishing under the politician-administration liquor mafia nexus but the government is harassing the poor instead of taking action against the actual liquor mafia. Criminal incidents are consistently increasing, from killing of a constable by the liquor mafia to terrorizing acts and shooting by feudal criminals in Sanjhauli. CPIML has demanded inside the Assembly that the government should curb the liquor mafia and must take proper action against the said minister. Party has demaned the removal of tainted Minister Ramsurat Rai and asked CM Nitish Kumar to sack him.

CPIML Mujaffarpur District Secretary Krishna Mohan told that the Minister's brother Hanslal Rai's name is included in the FIR registered by the police at Bochaha Thana after the unearthing thousands of bottles of liquor during the raid conducted on the Minister's school. But instead of arresting the Minister's brother a teacher and two others have been arrested and jailed. The police is trying to hush up the matter under pressure from the Minister. Our demand is that the main accused Hanslal Rai, brother of Minister Ramsurat Rai, should be immediately arrested. The Nitish government is doing the grievous injustice of protecting the liquor mafia and jailing the innocent poor.

CPIML team went to Kakrachak village and met Raghunath Prasad Bhagat, father of arrested teacher Amarendra Kushwaha, and other family members. Raghunath Prasad said that Ramsurat Rai's nephew (Hanslal Rai's son) came to the house and pressurized us to go with him and when we refused he left us with threats. The father told the CPIML team that they were afraid and that the entire family is under threat. CPIML has demanded protection for the family to be given by the administration.

A protest with the burning of effigies of the CM and Minister Ramsurat Rai was organized at Bochaha and Aurai and a dharna held at District HQ on 16 March for removal of Minister Ramsurat Rai. Ramsurat Rai is the Land Reform and Revenue Minister in Nitish cabinet. Bochaha is the home block of the Minister where thousands of bottles of liquor were seized on his school, while Aurai is the constituency he represents as MLA.