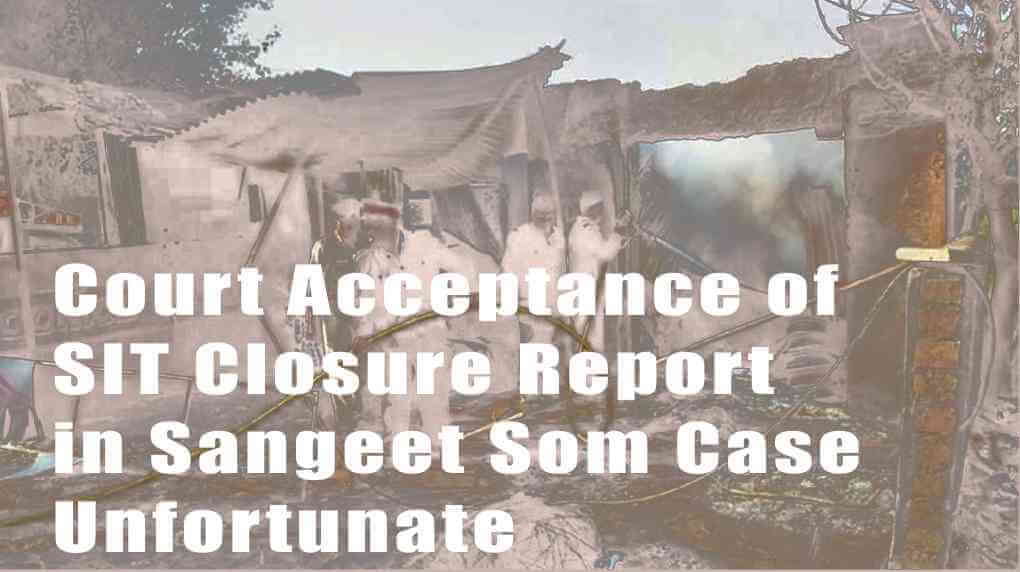 The CPIML Uttar Pradesh unit has stated that it is unfortunate that a special court has accepted the police SIT closure report in the case against Sardhana BJP MLA Sangeet Som regarding the infamous Muzaffarnagar riots.

In a statement on 10 March 2021 the CPIML said that the first thing Chief Minister Yogi did on coming to power was to act as judge and withdraw all criminal cases against himself. Now he is using the police to withdraw cases against riot-accused BJP leaders. Who will give justice to the suffering people where the government itself is the plaintiff as well as the judge?

The Yogi government is misusing its power and going against the law and the Constitution. People's rights are being curtailed, freedom of expression is being smothered, innocent people like Dr Kafeel, anti-CAA protesters and other dissenters are being slapped with false cases and thrown into jail; on the other hand, cases against BJP persons are being withdrawn. This is totally against the interest of public good.

The party statement pointed out that the police SIT closure report was not opposed in court because it was the government's job to do so. The police officer Subodh Kumar (then SI posted in Muzaffarnagar) who had filed the complaint against Sangeet Som and others has since been murdered by saffron goons while he was posted in Bulandshahar.

CPIML has stated that the Muzaffarnagar riots were no ordinary riots. More than 60 people were killed and thousands were forced to flee. Sangeet Som and other BJP people committed crimes in 2013 like making fake videos go viral and inciting riots through illegal Mahapanchayats, which the police SIT did not bother to investigate or confirm. Finally at the behest of the Yogi government the SIT filed the closure report and the special court accepted it. We demand that instead of 'closing' the case there should be a judicial enquiry to give justice to the riot victims. As guardian to the victims, it is the state government's duty to do this; otherwise the high court should take suo motu notice and provide solace to the victims.