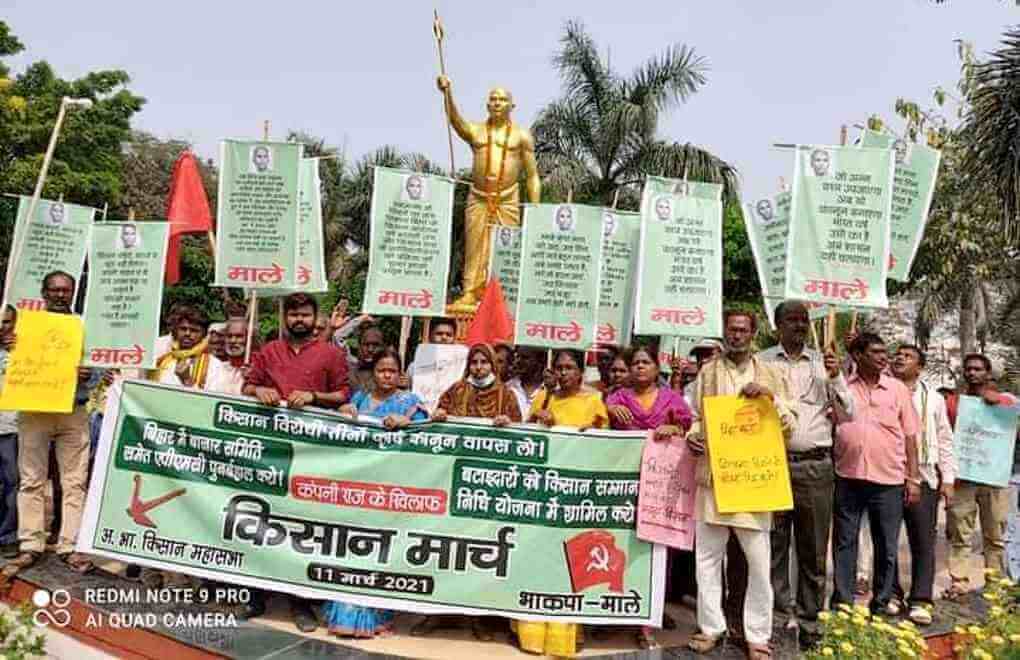 On the birth anniversary of great farmers’ leader Swami Sahajananda Saraswati who led the movement against British Company Raj and the zamindari system, a kisan march was organized in Patna on 11 March under the banners of CPIML and AIKM.

The march culminated in a meeting at Swami Sahajananda Park where tributes were paid to him and a pledge was taken to carry forward his legacy. The march reverberated with slogans for repeal of the three farm laws, legal status for MSP, reinstatement of APMC Act in Bihar and inclusion of small farmers and sharecroppers in PM Kisan Samman Yojana.

CPIML Dumraon MLA Ajit Kushwaha said that the ongoing farmers' movement is spreading and growing despite all efforts by the ruling powers to crush it. Rattled, the BJP is trying to co-opt small and marginalized farmers by pretending to be their friend, but this will not work because everyone knows that the BJP and its allies are the biggest enemies of small farmers and sharecroppers. BJP-JDU did not allow the implementation of the Bandopadhyay Commission (set up by themselves) recommendations and put the recommendations for sharecroppers into the dustbin. They are not willing even for registration of sharecroppers.

Ranvijay Kumar said that there is no provision in the PM Kisan Samman Yojana for landless farmers and sharecroppers. The fight for their rights is being fought for the reinstatement of the APMC Act, legal status for MSP, ending privatization of electricity and other demands. BJP-JDU are spooked to the utmost when they see this extensive unity among farmers.

Kisan yatras have begun across Bihar covering seven different routes, against the oppression being unleashed on farmers by the Modi and Nitish governments. The yatras will continue from 11 to 15 March and culminate in a Vidhan Sabha march in Patna on 18 March. The kisan march also appealed to people to make the Bharat Bandh called on 26 March a historic success.

Small farmers and sharecroppers attended the Mahapanchayat in large numbers.

Addressing the Mahapanchayat, Dipankar Bhattacharya said that Swami Sahajananda's journey started with fighting the Brahmin community to achieve social dignity for Bhumihars, but he soon realized that the range of social oppression was much bigger and dalits and backward castes were much more oppressed. He saw the misery of farmers and recognized that the zamindars were not the real farmers. He organized the Bihar Pradesh Kisan Sabha in 1929. The movement he led soon became a national movement and he was elected the first National President of the All India Kisan Sabha in 1936.

Sahajanand declared the fight for freedom from British rule for India and from zamindari for farmers would be fought simultaneously. His ideology was the Left ideology and he said that the red flag was the most reliable flag for achieving freedom. Today also the red flag is at centre stage in the ongoing farmers' movement at the Delhi borders.

Sahajananda worked for the Left Coordination Committee but soon after Independence he passed away in 1950 and left the country bereft of a great leader.

The farmers' movement in the 1970s took its inspiration from Sahajananda. When IPF won in many constituencies in the 1989 elections in Bihar, people felt that Sahajananda's legacy had come back to life. Today also we are committed to carrying forward his great legacy. He cannot be constrained within caste boundaries and will be remembered as one of history's greatest farmer leaders.

The Modi government forced through farm laws during the Lockdown, against which the ongoing farmers' movement has completed 100 days. Modi Ji says some people are 'Andolanjivis'; yes, we are proud to be Andolanjivis who fight for just rights, unlike the people who were informers during the freedom struggle and who kow-tow to Adani-Ambani today.

He appealed to the Mahapanchayat to ensure a huge participation of the poor of Bihar in the nationwide farmers' struggle.

At the conclusion of the Mahapanchayat a resolution was passed to appeal for the resounding success of the Vidhan Sabha march on 18 March and Bharat Bandh on 26 March.

The 7 Kisan Yatras were flagged off from Bihata which travelled to various parts of the State between 11 and 15 March.

Rattled by the ongoing nationwide farmers' movement, BJP is resorting to false and baseless propaganda against the movement. Now they are setting up small vs big farmers and trying to sow seeds of division. But everyone knows how BJP treats small farmers and sharecroppers, who are excluded from the PM Kisan Samman Yojana. Bihar has accepted BJP's challenge. Small and sharecropping farmers in Bihar have jumped into the farmers' movement. Mobilizations of farmers has started for demanding repeal of the three farm laws, legal status for MSP, reinstatement of the APMC Act, inclusion of small farmers and sharecroppers in the PM Kisan Samman Yojana and other issues. 18 March will see a large outpouring of farmers on the streets of Patna.

CPIML has welcomed the joint call by farmers' organizations and trade unions and observed 15 March as Workers-Farmers Unity Day against privatization. The party appealed to farmers and workers of Bihar to make this day a resounding successand requested students and youth to participate in large numbers in the programs against privatization and to raise their voice for employment.

CPIML has supported the call given by Samyukta Kisan Morcha for a Bharat Bandh on 26 March and appealed to all justice-loving people of Bihar to make the bandh a historic success.

All 7 kisan yatras have completed their visit to about 35 Districts in Bihar till now. During the yatras they organized more than 300 big and small street meetings, public meetings and village farmers' meetings, and also invited farmers and workers to participate in the Mahapanchayat to be held in Patna on 18 March. The yatras covered about 5000 kms in Bihar and established direct dialogue with more than 1 lakh farmers in 2000 villages. During the yatras farmers were made aware of the reality of the three farm laws.

AIKM State Secretary Ramadhar Singh, State President Vishveshwar Prasad Yadav, Naval Kishore, Vijay Singh and others led these yatras. Various demands of farmers came to light during the yatras in which they want immediate intervention. Some of these demands are: repairing the Son canal system in Shahabad and Magadh region; provision for water to reach the lower banks of canals; completion of the long-awaited Indrapuri Reservoir project. Maize producing farmers in Eastern Bihar were deeply concerned about maize not being procured at MSP and food grains being used to manufacture ethanol. Farmers in Seemanchal-Mithilanchal want a permanent solution to the recurring flood problem. Sugarcane farmers in Champaran raised the issue of payment of arrears which are due to them in lakhs of rupees. The demand for restarting sugar mills was also forcefully voiced. Farmers expressed grave worries about the 3 farm laws and criticized the Modi government for its stubborn attitude.

Landless farmers and sharecroppers also participated in the kisan yatras and expressed their worry that if the government stops procuring food grains how will the PDS system continue to function? How will the poor get rations? They understood perfectly well that ending the mandi system will affect not just farmers but also the poor.

The farmers are mobilizing themselves around the issues of repeal of the 3 farm laws, legal status for MSP, reinstatement of APMC Act and inclusion of small farmers and sharecroppers in the PM Kisan Samman Yojana. This mobilization will be seen once again on the streets of Patna on 18 March.

CPIML on 15 March 2021 invited all Mahagathbandhan parties to participate in the farmer-worker Mahapanchayat being organized on 18 March at the Gate Public Library in Patna. CPIML leader Dhirendra Jha and KD Yadav visited the offices of RJD, Congress, CPI and CPM and gave the invitation letter to RJD State President Jagadanand Singh, CPI State Secretary Ram Naresh Pandey, CPM leader Ganesh Shankar Singh and Congress Office Secretary. The Mahagathbandhan parties have given full assurance of participation in the 18 March program.

CPIML General Secretary Dipankar Bhattacharya said that we must give a forceful counter to the illusion being spread by BJP that there is no participation of small farmers and sharecroppers in the ongoing farmers' movement against the farm laws. Bihar depends on sharecroppers for most of its farming whereas the governments at the Centre and in Bihar give these farmers no legal rights. This section forms the backbone of the farmers' movement in Bihar. He appealed to party cadres to ensure extensive participation of various sections of farmers as well as rural workers in the Vidhan Sabha march in Patna on 18 March. 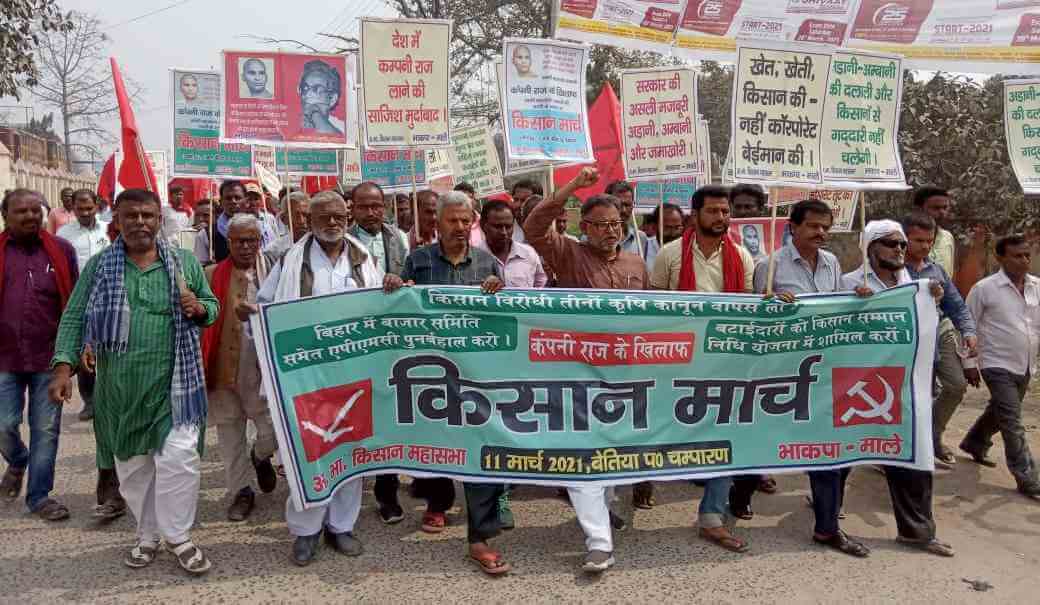 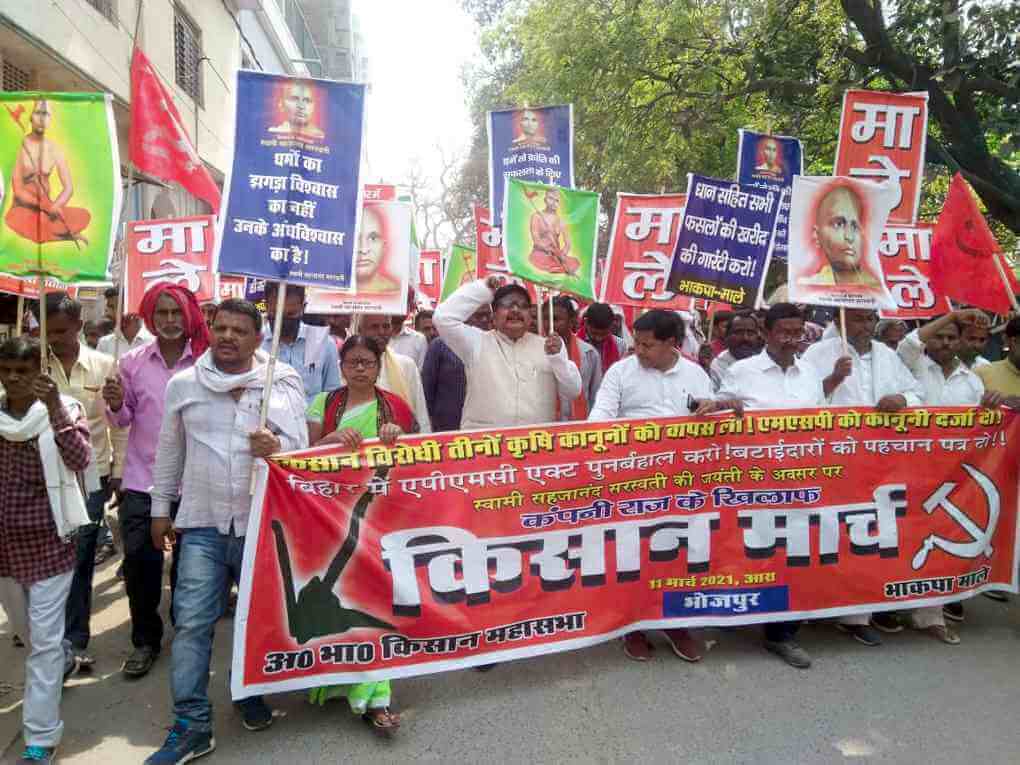