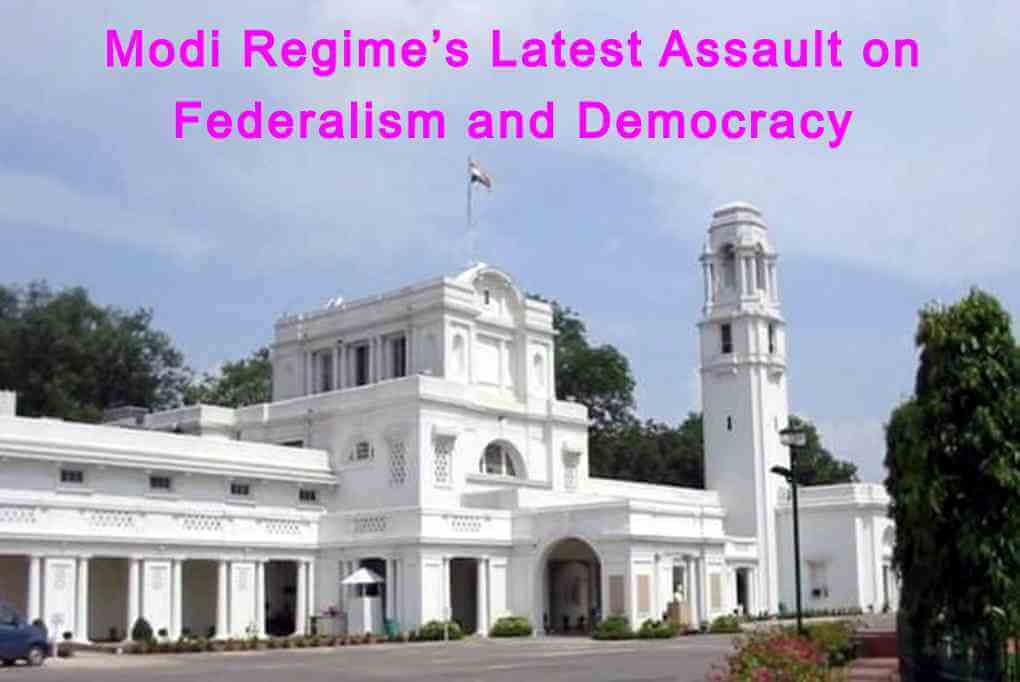 In the latest assault on federalism and the Constitution, the Modi Government has introduced a Bill in the Lok Sabha seeking to drastically restrict the powers of the elected government of Delhi, and hand over all effective power to the Lieutenant Governor of Delhi. The Government of National Capital Territory of Delhi (Amendment) Bill 2021 defines “the government” as the Lieutenant Governor of Delhi, and requires the LG’s approval for all executive decisions and laws enacted by the State Legislature. This Bill effectively seeks to reduce the elected government of Delhi to a cipher, and vest all powers in the LG who represents the Central Government. The Bill is therefore not just an assault on the federal structure mandated by India’s Constitution, it is an assault on the basic democratic principle of elected representation.

The Bill seems to have been introduced to overrule 2018 and 2019 Supreme Court judgements which had clearly and unambiguously restrained the Lieutenant Governor from overstepping his powers beyond the ambit of police, public order, and land. Delhi has been promised full statehood by Congress and BJP alike – though neither has delivered on its promise while enjoying power at the Centre. Prime Minister likes to preach “cooperative federalism” – even as he not only refuses complete statehood to Delhi, but seeks to override the will of Delhi’s electorate simply because it has chosen to defeat BJP in the last two successive Assembly Elections.

It may be recalled that the freedom movement had successfully resisted attempts by the British colonial power to impose the Government of India Act 1935 because it sought to concentrate power in the hands of the Governor General and the Viceroy. The Modi regime is once again, acting like the British Raj, with the Governor being placed in the position of Viceroy over elected state legislatures.

Nor is the Delhi Bill the only instance of the Modi regime’s attacks on federalism. Other prominent instances include the GST law; the attempts to misuse the Governor’s post to topple elected Opposition Governments in states and union territories; the Governor in a state like West Bengal acting as a virtual Opposition leader, losing no chance to undermine the elected State Government; the CBI raid on the office of the Kolkata Police Commissioner; the Centre’s move to suspend good trains to Punjab in response the State legislature’s opposition to the three pro-corporate Farm Laws; and the Delhi Police detaining Disha Ravi and bringing her from Karnataka to Delhi without informing, let alone seeking the consent of the police and judicial authority of Karnataka.

Of course, one of the earliest and most glaring instances of the Modi regime’s assaults on federalism was the abrogation of Article 370 and the move to strip Jammu and Kashmir of statehood and split it into multiple union territories. It may be recalled that for the abrogation of Article 370, the Constitution of India required the consent of the Constituent Assembly of J&K. It would have been stretching truth even to argue that the elected Assembly of J&K could stand in for a Constituent Assembly. But in 2019 August, the J&K State Assembly stood dissolved and the state had no elected government. The Modi regime declared that the Governor – the representative of the Central Government – represented the will of the people of J&K and that his consent was enough for the Centre to abrogate Article 370.

Unfortunately, parties like the AAP, TDP, BSP, AIADMK, BJD and YSR Congress which passionately defend the federal rights of states in which they enjoy or hope to enjoy power, cheered on the Modi regime’s unconstitutional, anti-democratic, and anti-federal abrogation of Article 370. The abrogation of Article 370 – cloaked in the legitimacy offered by these prominent regional parties  - emboldened the BJP’s anti-federal drive and paved the way for the spate of assaults on federalism that we are witnessing today.

The Delhi Bill is not a matter of academic debate about some abstract federal principle. It directly attacks the rights of the voters of Delhi. It confirms that the BJP will not hesitate to use Central Government powers to punish voters who dare to elect non-BJP Governments. Can there be any doubt that the BJP intends to use the NRC-NPR-CAA corpus of laws also to control and penalise voters, by using the Central authority’s powers to disenfranchise and cast “doubt” on voters whom the ruling BJP sees as hostile to its interests?

We all see how the BJP under Modi-Shah targets and even imprisons every dissenting or protesting citizen – whether they are a student, a farmer, a writer or a journalist– as “anti-national”. Now the BJP is curtailing the powers of entire elected state governments, by equating BJP’s political interests with those of the nation’s. Ruling class Opposition parties may be inconsistent in defending democracy – speaking up when their government is threatened but remaining silent against draconian and anti-constitutional laws, unlawful arrests, arbitrary abrogation of Articles of the Constitution. But the people of India must defend federal and democratic principles from every assault. The defence of federalism in Delhi can only be effective when it is joined with the defence of the entire spectrum of democratic rights in India.