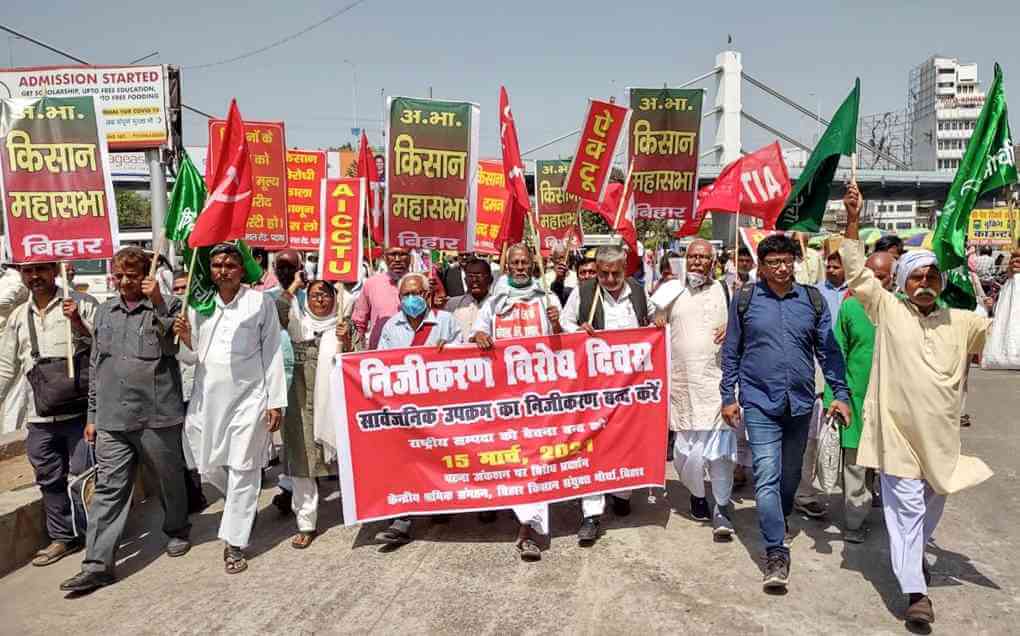 15 March 2021 was observed as Anti-Privatization Day in response to the joint nationwide call given by central labour organizations and Samyukta Kisan Morcha.

Bank employees went on two-day Bank Strike on 15-16 March against Privatization of banks by the Modi regime. The joint front of central trade unions and federations and the Kisan Samyukta Morcha have declared full support to the bank strike on 15-16 March, General Insurance workers' strike on 17 March and nationwide LIC strike on 18 March.

CPIML and All India Central Council of Trade Unions joined strikers at all major centers in the country. While in Bihar party MLAs Manoj Manzil, Mahanand, Rambali Yadav and Sandeep Saurabh expressed solidarity with striking bank employees in Patna. Across India, TU activists and citizens join bank employees in the common battle against privatisation.

The need of the hour is for united and relentless unified struggle by workers, farmers, students and youth in support of workers in all sectors and against the anti-people anti-national policies of the Modi government.

CPIML General Secretary Dipankar said that Privatisation is the Modi government's biggest mantra to sell strategic assets and cause economic ruin which must be stopped by all means. He expressed full support to the Bank Strike of 15-16 March and called for the support to public sector workers in defence of the public sector. The government has had its eye on the banking sector for many days, but the people of the country will not allow this to happen. The CPIML activists participated prominently in the bank strike visited various banks, met bank staff and expressed solidarity with their struggle.

On 15 March 2021 the first day of the 2-day bank strike called jointly by bank officers' and workers' organizations against privatization, all CPIML MLAs went to various banks in Patna and extended full support to the strike and gave the assurance that they would put pressure on the Bihar government to pass a resolution in the Assembly against privatization. The MLAs Arun Singh, Sudama Prasad, Ajit Kushwaha and Manoj Manzil; Satyadev Ram, Mahanand Singh, Rambali Singh Yadav and Sandeep Saurabh; Mahboob Alam, Virendra Prasad Gupta and Gopal Ravidas visited various banks. They were also accompanied by Patna CPIML City Secretary Abhyuday.

Privatisation of Banks – Departure from People’s Banking to Class-based Banks?

The MLAs said that banks have made a very important contribution to the country's economy and have safeguarded the people's hard-earned money.  Nationalization of banks worked to change the concept of class-based banking to people's banking. Today the Modi government is handing over banks to the corporates who have looted banks and are the biggest loan defaulters. Privatization will also end reservation in bank jobs. Branches in rural areas will be shut down. Company Raj for which the Modi government has striven incessantly will reign supreme.

A protest meeting in Udaipur, Rajasthan, was organized at the Collector's office by office bearers of labour organizations and farmers' organizations.

Addressing the meeting, AICCTU State President Shankar Lal Chaudhury said that the government is selling off national assets and PSUs to corporate companies in the name of 'opportunity in crisis', causing nothing but inflation, unemployment and economic disparity for the people. It is a direct attack on the concept of social justice enshrined in the Constitution.

AITUC leader Himmat Changwal said that the wealth of corporate houses has increased by leaps and bounds under the Modi government while the common people have been pushed into crisis. CITU leader Guman Singh said that in 2008 it was the PSUs that saved the economy from recession but the Modi government now wants to sell off these PSUs which are our national assets.

MCPI (U) leader Leela Sharma, Prof RN Vyas and others also spoke on the occasion. After the meeting a memorandum addressed to the President was submitted to the Collector with demands that included an end to privatization of national assets and PSUs.

15 March was observed as Anti-Privatization Day in Allahabad. Leaders addressing the meeting appealed to workers to make the strike a resounding success. The gate meeting was addressed by AITUC, INTUC, CITU, AIUTUC leaders and AICCTU leader Dr Kamal Usri. Later in the evening a dharna was organized near Pathar Girija under the banners of central trade unions, railway unions, AG's office, electricity unions, and bidi workers' unions. The dharna presided over by Naseem Ansari and Kamal Usri was addressed by leaders of various organizations and was attended by workers in large numbers.

A protest was also held in UP’s Gazipur district on this day where the unbearable hike in prices of petroleum products was opposed along with other demands. The protesters from various organisations including CPI, CPIML, CPIM, Bhumi Bachao Morcha etc. remembered the struggles of Swami Sahajanand Saraswati and the martyrs of Chauri Chaura Movement and paid them tribute.