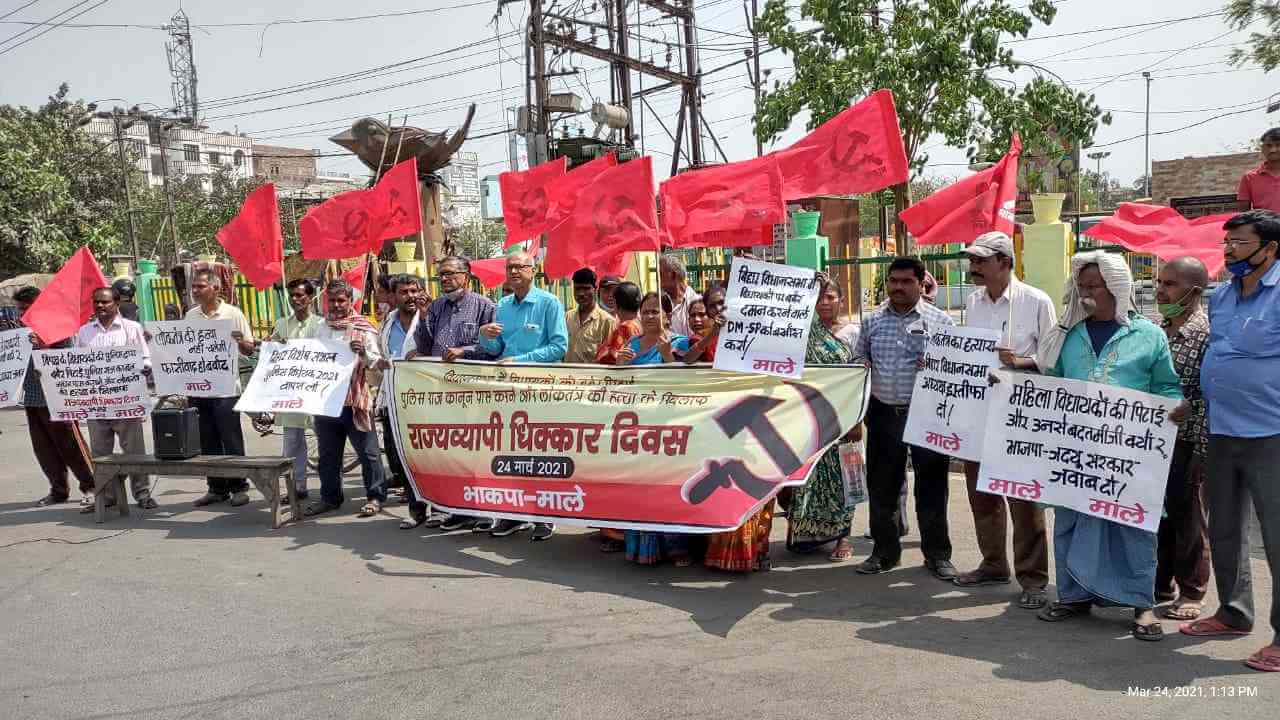 The first use of the Bihar Special Armed Police Bill 2021 was perpetrated inside the Bihar Assembly itself on 23 March 2021.

Shattering all rules and traditions of the constitutional and parliamentary system, police and goons entered the Assembly, brutally beat up opposition MLAs and pushed them out, after which BJP-JDU passed the draconian Bihar Special Armed Police Bill 2021 changing Bihar into a Police Raj.

Earlier, when the Assembly session commenced on 23 March the Opposition started protesting against the Police Raj Bill. The session was adjourned a few times due to opposition protests, and proceedings were obstructed throughout the day. At 5 pm before the session was to end, a large number of RAF police personnel were called inside the Assembly on the orders of the Speaker and the government. Marshals were of course already present. The Bihar DGP, Patna SSP and DM jointly oversaw the beating, kicking, fisticuffing of MLAs as they were pushed and dragged out of the Assembly. The SSP and DM were themselves among those who did the brutal beating. The entire Assembly was filled with police personnel and the Police Raj Act was passed in the complete absence of the Opposition. Journalists were also beaten up. Leader of CPIML legislative party Comrade Mahboob Alam's arm was twisted and wrenched. Comrade Sudama Prasad was pushed and shoved and he fell down the stairs, causing a serious finger injury. A CPIM MLA was so badly beaten up that he lost consciousness. A woman MLA's sari was pulled off. Some of those who perpetrated the beating up were in civilian clothes, probably BJP goons.

23 March 2021 will be recorded as a Black Day in the parliamentary history of India.

Next day on 24 March there were protests inside the Assembly against this Bill by the opposition MLAs. CPIML MLAs attended the session wearing black bands and the day was observed across Bihar as Dhikkar Diwas (Day of Shame).

CPIML held protests all over Bihar and burnt effigies of CM Nitish Kumar. In Patna activists condemned the shameful attack on MLAs and burnt the effigy of Nitish at Chitkohra. Protesters demanded to take back the unconstitutional and draconian Bihar Special Armed Police Bill 2021 which has been passed using police force beating opposition MLAs inside the Assembly immediately. CPIML Bihar Secretary and Polit Bureau member Kunal condemned the beatings and termed that day a black day in the history of India’s parliamentary democracy. He said this heinous crime explains clearly that the Nitish/BJP regime is taking Bihar towards a fascist state. The CPIML had expressed its apprehension of misusing the power if this Bihar Special Armed Police Bill 2021 was passed, and those apprehensions came true right on the day of its tabling and undemocratic passing inside the Assembly. The women MLAs were not spared and they too suffered same brutality. When MLAs are not safe inside the Assembly and they were not allowed to express their views on the draconian Bill, instead got beaten up and thrown out on the road, this is amply clear that after passing of this Bill what will be the plight of common citizens when police is given full immunity to perpetrate the attacks on citizens’ rights? Kunal asked to identify the attackers who were in civil dress along with the armed forces inside the Bihar Assembly, and also why the district magistrate of Patna himself seen to be pushing and attacking MLAs inside the Assembly?

Opposition MLAs conducted the Assembly session outside the Vidhan Sabha

For the first time in the annals of the Bihar Vidhan Sabha, in protest of the incidents of 23rd March all Opposition MLAs conducted the Assembly session outside the Vidhan Sabha on 24 March. A Speaker was elected to conduct the proceedings, and opposition was registered to the manner in which MLAs were beaten and pushed out of the Assembly on March 24.

Many things are being witnessed for the first time in the Bihar Vidhan Sabha. This is the first time in its 100-year history that police entered the Assembly, and this is the first time that angry Opposition members conducted the session outside the Assembly. Despite blazing heat the session was conducted by the Opposition. Opposition members elected RJD MLA Bhudev Chaudhury as Speaker, and sat on the floor while he occupied the Speaker's chair and issued rules and regulations as the Speaker. Many members participated in the proceedings. CPIML MLA Satyadev Ram said that the beating up of members inside the Assembly was a very serious issue and demanded a discussion on the matter.

With this protest Assembly, a new tradition was started in the history of the Bihar Vidhan Sabha by Opposition members conducting the proceedings of the session outside the Assembly.