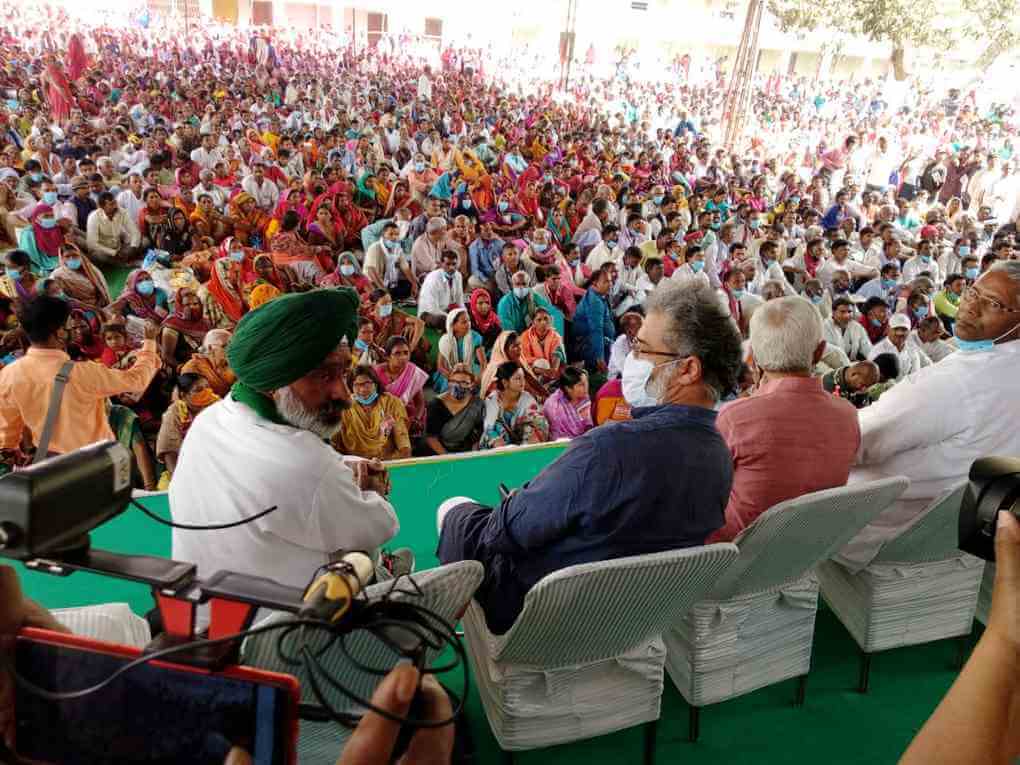 Thousands of farmers and workers participated in the Kisan-Mazdoor Mahapanchayat organized at Gate Public Library in Patna on 18 March 2021 under the joint banners of CPIML, AIKM and AIARLA to demand repeal of the three farm laws, resolution against them to be passed in the Bihar Assembly, legal status for MSP, reinstatement of APMC Act, inclusion of landless and sharecropping farmers in PM Kisan Samman Yojana and other demands.

Main speaker at the Mahapanchayat CPIML General Secretary Dipankar Bhattacharya said that the Bihar government has perpetrated the worst betrayal against the farmers of Bihar by ending the APMC Act in 2006 and pushing farmers into a vicious cycle of misery. The issue of MSP is an issue not just for big farmers but for small farmers also who are suffering for lack of procurement at MSP. The farmers of Bihar get the lowest price for their crops.

Comrade Dipankar said that the farmers' issue will be the main issue in the forthcoming elections in various States. He appealed to people to vote against BJP and defeat them.

Farm leader Gurnam Singh Bhakhi from Punjab Kisan Union who came to attend the Mahapanchayat from Tikri Border in Delhi, said that farmers have been firmly camping on the Delhi borders despite all obstructions and oppression by the government. This fight against the three laws is a fight for the food security of the entire country. It is a matter of life and death for common people across the country.

Navkiran Natt the editor of the popular news bulletin being published from the protest sites in Delhi, Trolley Times, and youth leader also addressed the Mahapanchayat where she said that women are participating in the farmers' movement as farmers in their own right. Women account for 50% of farming work but their ownership of land is only 2%. This fight belongs to each and every citizen, as it is a fight for the right to food. She expressed the hope that a tranche of farmers from Bihar would soon join the farmers sitting on the Delhi borders.

The Mahapanchayat paid tributes to Swami Sahajananda Saraswati, leader of the historic farmers' struggles in Bihar and all martyrs of the ongoing farmers' movement. Cultural team Hirawal presented a song in honour of the martyrs.

All Mahagathbandhan parties of Bihar and many intellectuals associated with the farmers' movement were invited to participate in this Mahapanchayat.

Thousands of farmers and farm workers attended it with a strong resolve to further intensify the movement in Bihar.

Resolutions passed at the Farmer-Worker Mahapanchayat